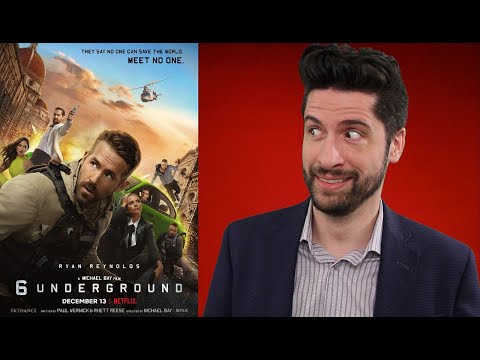 Quick Story Time Before The Review I Had To

review six Underground because Summer 2018, Vanessa and I went on vacation. We went to Florence Italy to get away from it all unhooked no comment sections no videos just Florence Italy and Michael Bay was filming a movie called six underground there what are the odds I can’t escape it He followed me there it’s really cool outside our Airbnb. There was a car chase going on It was cool to see that in the movie it’s about in the 8-minute 45-second mark in the movie Just if you’re wondering so I got to talking about this one when it comes out. I’m attached now so now it’s out here. We go six underground so six Underground is a Michael Bay film straight to Netflix.

Its About Six People Who Have A

particular set of skills all of. Them are presumed dead, though obviously they’re alive they’re doing this underground. Their ghosts led by Ryan Reynolds, who’s a super rich guy. I’ve got them all together and yes. This is totally Avengers meets Knight Rider now that I’m explaining it and now they’re gonna do a regime change Take out this tyrant replace him with his brother Yes it is Avengers meets Knight Rider meets man in the iron mask Michael Bay and in the first half for this movie I was like okay.

This Is Actually A Text That I Texted.

I think it’s pretty accurate myself and a rotten Tomatoes is always looking for the phrase to put on Rotten Tomatoes from my review of the movie so Tomatoes. If you’re watching can we make my quote. 600 ground is like doing a line of coke while simultaneously doing a cake stand of Red Bull up. Your ass, I think that’s just accurate.

I Think Im Putting To Rest

whether or not my channel is made for children. I don’t think UK ever has asked me that again, But if kids are watching hugs not drugs Don’t do that that’s terrible. The first half is so just you’re like Oh action scene action scene action sequence upon action sequence is it disjointed yes is it stylistic actually the thing I enjoyed about it is the fact that it’s just the deaths What can I say stylistic cinematic death well that’s just fun and whether it’s a car smashing into something on its side, splitting the blumin half a car smashing into something and there’s like now a dead body on that something or someone flying out of a car and then getting sucked under the tire. I’m just saying Michael Bay was just like. Like Alright I have a budget I have an R rating.

I Have No One Looking Over My

shoulder. I’m all for directors being able to give their vision. Michael Bay is just one of those guys that I’ve seen where I’m like you probably should have some coin look let’s make something cohesive. The first 20 minutes of this movie action sequence. Why they’re running they just are there they are because they are because Bay that’s Bay not Bay and after that you get the flashbacks of the people to see how they joined the crew and at one point Ryan Reynolds was like Alright now you’re all cut up also one more flashback sequence.

caught up the second half of the movie You know after the first hour that’s when the movies like Alright we’re focusing up and we’re actually. Here to do the job The a-team Slash Nightriders Slash Avengers are here to do the man in the iron mask thing not really man in the iron mask. I mean they’re not identical that doesn’t matter so the second half of the movies actually a lot more enjoyable because it’s actually a storyline happen with storyline nothing but it’s cohesive it’s actually one thing leads to the next leads the next okay you can fall away you can’t follow blumin in the first hour of this movie. Just it’s just stuff happening, but even then it’s just like people are still Kooky weird versions of themselves like Ryan Reynolds is Ryan Reynolds, but everyone else just kind of like this is one scene where they’re like alright we’re using laughing gas and everyone’s laughing and one guy’s like Oh I lost part of my mask he so. Now I’m laughing so they have to deal with that now I always feel like Michael Bay makes these changes on set you know where he was like I’m just gonna have an action sequence, but what if someone actually got hit with the laughing gas, who was actually a part of the team.

and Transformers Revenge of the Fallen, which I’ve only seen once in theaters, but this is a scene. I remember mostly she ate the pot Brownie It’s like Michael Bay filmed that scene with Sam WitwickyNK] man He was like one day. I’m gonna have someone act like that in another movie only they’re gonna have a gun and it’s gonna be an action sequence because why not the movies messy all the high-octane chase sequences near the beginning is fun but in that UK kind of way I. feel like there could just be a string of UK videos. A playlist called Car chases no story and just a montage of chase sequences and you’ll just kind of get the same feeling and then cool military stuff No story Alright that’s the other part of the first half of this movie As a whole.

This Movies Just Detached And Just

feels like people through remnants of a plotline on a wall and they just connected strings and they’re like wow doesn’t all make sense fact most of it doesn’t but what does what’s film it there was some really stylistic stuff that was happening near the end of this movie involving a magnet. I can’t deny that there was also a horrendous amount of shaky-cam in the second half-so there you are and imperfectly balanced blumin how the whole thing should be you’ve heard. heard the phrase all style no substitutes. I don’t even know how good the style is Cuz in terms of style it’s not that stylish.

I Think A Style I Think Of Something

sleek and polished. You know boned James Bolton. This is like this boards bro James UK I don’t know style over substance is the phrase but I will say six underground would probably be a better time if I were drunk yeah that case there was the Red Bull alright so six underground have you seen it what did you think about it whatever you thought comment below let me know and as always if you like what you seen here and you want to see more click right here to see more.

Six Underground is a Michael Bay film straight to Netflix. It’s about six people who have a particular set of skills all of. Them are presumed dead, though obviously they’re alive they’re doing this underground. Their ghosts led by Ryan Reynolds, who’s a super rich guy.& I’ve got them all together and yes. This is totally Avengers meets Knight Rider. I think I’m putting to rest whether or not my channel is made for children. But if kids are watching hugs not drugs Don’t do that that’s terrible. Don’t think UK ever has asked me that again. I don’t think I ever has been asked me again, But if . kids are . watching hugs and not drugs. It was cool to see that in the movie it’s about in the . 8-minute 45-second mark in the film. I was like to say ‘I think it’s like doing a line of coke while simultaneously doing a cake stand of Red Bull up. Do you want to…. Click here to read more and watch the full video