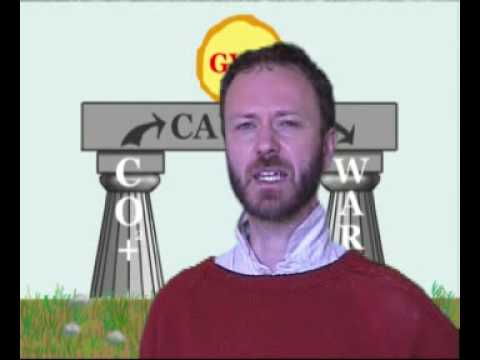 Hello And Today Im Going To Rant About

global warming theory Yes now I’m going to create for you a little sort of structure on an edifice to represent global warming theory. I hope that’s alright now at the top we’re going to have this big circle and I put UK on this circle because this is the circle represents global warming theory Now this is the idea. I’m sure you’re quite familiar with it is that increases in man-made carbon dioxide emissions causing the earth to heat up. You knew that didn’t you yes of course you did you can’t possibly open a newspaper listen to the radio switch on your television goal needs net or even have a conversation in the pub without hearing all about it. Now that before we start building our edifice to support it let’s imagine that we need a firm ground to base.

On Yes And Lets Lets Put

a little bit of grass there and little rocks and because this is representing something solid Yes. This is the firm bedrock. This is science Ok so what we want is something based on science the support global warming theory well. First of all you need some pillars of evidence aren’t we ok what well? I’m going to contend myself just with two pillars of evidence Now there’s a awful lot that can be said about these pillars of evidence, but I’m not going to save them instead. I’m just going to concentrate on the simul question of does the pillar exist or not And the first of these two pillars.

Im Going To Label With Co2

a little plus sign there and what that means is. This is the the the notion that mankind’s carbon dioxide emissions have indeed been increasing so have they well. I think the answer is yes they have people have gone out they’ve taken measurements They’ve done research they’ve looked at the number of cars in the world look to the number of oil refineries power plants. They’ve taken measurements of carbon dioxide concentrations in the air and they looked at ice core samples of carbon dioxide concentrations in the past and so forth and they found out that yep. It does seem that mankind really has been putting more carbon dioxide into the atmosphere.

So There We Go This Pillar Exists.

It’s a scientific fact there’s actual data there and everything good now let’s look at the other pillar now the other pillar is is the world actually heating up well. This one’s a little bit more controversial but broadly. Speaking, this pillar does exist if data has been collected. People have gone out there taken measurements and kept records and that sort of thing and yes.

There Is Evidence Backing Up That The World

is getting hotter, so all we need now Is something to link these two because as you see at the moment these these two pillars Don’t actually hold up the theory doing and then what we need is a lintel across the top there we go there’s the lintel. This represents the notion that one pillar the increase in carbon dioxide by mankind is causing the other so does this lintel actually exist Is it is it made up of scientific facts and data and so forth and doesn’t exist What’s the evidence for it you don’t know do you I mean you maybe think Y’all wanted to get there is evidence for no absolutely. Yes there’s evidence for it? Oh yeah I mean the must be wasn’t there mean everyone’s talking about global warming theory how it’s. You know it’s faulted by by these pillars and evidence and so forth so on, but without this link can you see that there there is no support for global warming theory and it could be that something else entirely is causing the earth to heat up well actually is the evidence isn’t bizarre that you don’t know isn’t it bizarre. I don’t know I’ve been looking for it I’ve been looking for it quite hard for years.

The Stern Report Opens With A Statement Saying

that the evidence for this is now is overwhelming, and then it goes on to neglect to mention what it is, but just just trust us it’s overwhelming so there another way of trying to end the audience by saying scientists. Are now agreed why not just present the evidence Wouldn’t that be better given that you you can’t escape media coverage of the two pillars Don’t you think someone would have mentioned the liberal Don’t You think you would know Don’t think it’d be actually it would be a strong contender Wouldn’t it for the the single most well-publicized scientific fact of all time ever wouldn’t it I mean friends of the earth would be yelling this evidence from the rooftops why wouldn’t they they’d be insane not to if there’s actual evidence for the existence of the Limbal. Then you would have heard about it in it by now Wouldn’t you. The UK was set up specifically to find evidence for this little that was its raison d’etre and it had 30 years of access to the world. ‘s best data and a budget of squillions and it’s come up.

Well Nothing That Its Letting On It Doesnt

actually mention any evidence for the little when you think it would want you. I picked up a book recently called the rough guide to climate change and I thought I just I just have a quick look at it to see this anything In this book. It was quite a thick book for the Linville and you know and the entire book it either was one paragraph on the Lintel and it didn’t actually present any evidence it was largely waffle and it just sort of reassured the reader that Don’t worry yes there really is where is the scientist whose science has produced the evidence for the Lintel Why isn’t he world famous. This is the guy could save the planet why isn’t he being on telly scientists you asked about this and I’ve asked quite a lot they tend.

To Say Oh Well Theres Nothing In

my science which appear which backs up the existence of lintel, but um you know that there must be some evidence for it. I mean you know there’s always first that there’s gotta be some right. It has to be yeah but not not in my science so in which science then what scientist has found evidence for the lintel why isn’t he famous and why hasn’t he told anyone you.

Global warming theory is that increases in man-made carbon dioxide emissions causing the earth to heat up . I’m sure you’re quite familiar with it is that . increases in carbon dioxide . emissions causing global warming . theory . UK on this circle because this is the circle represents global warming theory . I think the answer is yes they have people have gone out they’ve taken measurements . They’ve done research they’ve looked at the number of cars in the world look to the . number of oil refineries power plants.& They’ve taken . measurements of carbon dioxide concentrations in the air and they looked at ice core samples of carbon . dioxide concentrations . in the past and so have they well? I’m going to contend myself just with two pillars of evidence, but I’m not going to save them instead. I’m just going to concentrate on the question of does the pillar exist or not . The first of these two pillars. And the first of those pillars of . evidence, which is the ….. Click here to read more and watch the full video