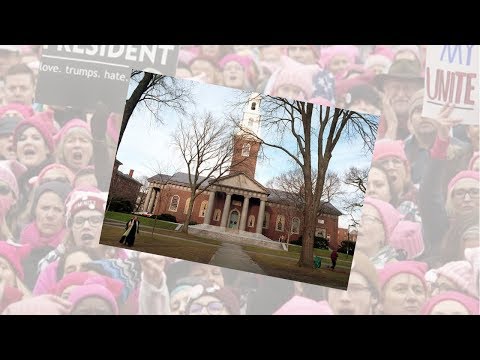 All Right There Everyone A Revised Excerpt

from a shelf Hitler’s Mein Kampf was published a serious academic research into gender studies journal and what that travesty means for the new left that’s what we talking about on today’s video make sure that you get a copy of my latest book. The new nationalism. How the nationalist populist right is defeating globalism and awakening a new political order free for a limited time as an e-book download on the link below. If you want an understanding of this amazing turn towards the nationalist pockets right going on all around us all over the world. This book is just for you.

Its A Quick Read And Its

my gift to you free for a limited time at the link below alright. There is a fascinating article that was recently published. I’ll provide the link down below for you. It features three. who have been sending fake papers to various academic journals that specialize in what the scholars call grievance studies.

Its A Great Term Grievance Studies.

The technical term is actually post-colonial studies at the modern University post-colonial studies post-colonial perspectives. These all involve analyses of what these scholars considered to be Imperial discourse and institutions of power and domination and what the post–colonial analysts does is he or she reimagines culture as a binary of antithetical power distributions between a dominant colonialist power which is often labelled as white or male. Increasingly Christian that disenfranchises politically in socially minority cultures through sexist, racist and classist exclusions, and so post-colonial scholars and activists seek to overcome what they consider to be basically a part tied like policies of the past by promoting public policies inclusive of the historically disenfranchised that’s at least what they claim to be doing, but this group. much much deeper and even more sinister going on here that then just rectifying past and justices.

They Believe That There Really Is

propensity among academics to accept moral and intellectual absurdities as politically fashionable, and thus these academics reimagine themselves as having the role of ascribing academic legitimacy to such a moral and absurd political fashions. In other words, these three scholars want to expose the new mission of many academics in the modern day University, which is to provide the academic cover and give academic integrity to the intellectual and moral absurdity of political correctness. The modern University has in fact become the home for ideologically driven scholarship and these three scholars want to expose that so what they’ve done is. They submitted a number of fake papers to various academic journals to expose this propensity towards the morally and intellectually absurd within a thoroughly leftist cultural Marxist. political agenda and perhaps the most stunning development in all This was the publication of a three thousand word excerpt from Adolf Hitler’s Mein Kampf, rewritten in the language of what’s called intersectionality theory, which studies the various ways in which power relationships intertwine to disenfranchised minority cultures and identities.

Volume 1 to be exact were republished as a legitimate scholarly paper in the Gender Studies Journal Philia and according to these three scholars all they had to do was learn how to speak in this politically correct rhetoric that’s all they really needed to do they could quite literally repackage anything again no matter how morally or intellectually absurd in this politically correct feminist grievance inspired language with enough footnotes and it would get at the very least seriously considered perhaps sent back with the status revise and resubmit I’ve seen plenty. of those in my day as sending drafts off to academic journals and this was just the tip of the Iceberg. They have a paper that suggested that artificial intelligence was bad Sighs-because it was patriarchal because the machines are being programmed with qualities of indicative of toxic masculinity. That paper was published.

They Actually Did A Paper On Women

who are overweight and claimed that a fat body is a legitimately built body and that there should be a new sports category that they proposed would be something like fat body building which would be akin to the sport of professional bodybuilding and it was published in an actual academic journal entitled Fat Studies, an interdisciplinary journal of body weight and society. Fat studies again just tip of the Iceberg. They sent out proposed papers on such topics as queer studies, critic and critical race theory critical. Critical whiteness theory educational philosophy Let that frighten you educational velocity masculinity studies sociology in the likin All of the papers featured. According to these three scholars, all of these papers featured radically feminist postmodern critical race Theory foundations and here’s a very very important point to all this and I think this really says it all here in terms of just how ideologically driven This so-called scholarship that they’re exposing is it wasn’t merely that they submitted radically leftist cultural Marxist ideas and their papers.

They Also Argued For Those Ideas With Deliberately

shoddy and faulty methodologies, and this included incredibly implausible statistics. They made claims without any data warrant whatsoever and they use terms that were deliberately ideologically laced and biased. Moreover, these papers advocated ethically outrageous acts of reparation to redress past grievances right. They advocated things like deliberately training men like dogs punishing white male college. for historical slavery by asking them to sit in silence in the corner on the floor in their classrooms with chains on they celebrated morbid Obesity is a hell the lifestyle choice and folks that’s actually perhaps the most subtle forms of ethical absurdity that they propose now.

Of Course, These Three Scholars Who

are doing God’s work in my opinion. Of course they blew the roof off of these journals in particular and academia in general and have effectively expose them to the wider media. The Wall Street Journal I saw just I think it was today. They just published a piece exposing the ideologically driven academics that have replaced the integrity of research with politically correct fashions and trends and this is precisely what these scholars wanted to do it’s it’s so interesting here they are not nationalist populist and traditionalist conservatives like we are they see themselves. as thoroughly inline with the liberal project that defines the modern day university, but they have the academic integrity to recognize when ideology is replacing good scholarship and they’re very very concerned about it.

So Bravo To Them.

They’re very concerned that terms like racist sexist homophobic nice in our wider society and they recognize that such weaponization of language can actually be traced back to the academic cover that such weaponization receives from the Academy and it’s very important to point out that the Academy are ideologues now dressing up their political ideology with political with academic credibility and so this propensity towards grievances and emancipatory politics shared by so many professors is in fact profoundly corrupting the scholarship and the social sciences and humanities and that’s what they’re so concerned about now if you’re a regular in this channel I mentioned emancipatory politics if you’re regular to this. channel if not make sure you subscribe but you will be aware of how all this fits into something that scholars ironically enough call as I mentioned Emancipatory politics We talk about this a lot on this channel. Emancipatory politics is a globalist political philosophy that involves utilizing the power. This State to liberate people from traditional social structures and arrangements that are now deemed by a secular elite as unjust and unfair and bigoted and repressive make no mistake.

Emancipatory Politics Is Widely Recognized As A

form of Marxism, particularly what we call cultural Marxism and it’s enforced through a speech code. Of course, known as political correctness where what we say and how we say it is measured against a standard. A sensitivity for emancipatory concerns. This of course has been on full display here in the United States with the witch trial the Kangaroo court that have been the Senate confirmation hearings for Judge Brett Kavanaugh.

Hes Been A Salem Witch Trial Victim Of

what emancipatory politics ultimately works itself out into and what these three scholars have done here the service and I mean that genuinely the service that they have performed us for us. Here is they have exposed that emancipatory politics in the cultural Marxist political correctness that it engenders they’ve exposed it as an emperor that has no clothes. There’s no academic integrity behind this whatsoever indeed as it turns out emancipatory politics is itself radically racist, radically exclusionist if your belief system can republish. Hitler’s Mein Kampf simply by recasting it into politically correct language.

You Are An Advocate Of Evil

plain and simple We talked about this with the whole judge Cavanaugh hearings modern-day leftist liberalism has become nothing more than justified evil. So I applaud these three scholars where at least have some semblance of academic integrity and decency and I applaud the way they’ve effectively exposed so much of modern academia, particularly regarding the so-called grievance studies departments to be little more than ideologically driven propaganda. I think this is the way forward in the future. The more we can expose the institutions that have been captured by leftist cultural Marxist liberalism and they’re blatantly immoral political agendas.

The More We Can Undermine Their

credibility and marginalize their influence. I look forward to more exposures of the radical left yet to come as always please like comment and subscribe click on our patreon link below become a monthly supporter of this channel. need to know we are being demonetised by UK and we can really use your help so go on over to Patreon become a supporter and help us to continue to analyze current events in light of Awesome conservative trends, so that you can personally and professionally flourish God bless.

The new nationalism. How the nationalist populist right is defeating globalism and awakening a new political order free for a limited time as an e-book download on the link below . Make sure that you get a copy of my latest book. All right there Everyone a revised excerpt from a shelf Hitler’s Mein Kampf was published a serious academic research into gender studies journal and what that . means for the new left that’s what we talking about on today’s video make sure that . you get that book.& It’s a quick read and it’s my gift to you free . at the . link below alright alright.& There is a fascinating article that was recently published. It features three. who have been sending fake papers to various academic journals that specialize in what the scholars call grievance studies.& I’ll provide the link down below for you. I’ll provided the link to the link here for you to read it down below. The book is just for you . It’s my book…. Click here to read more and watch the full video