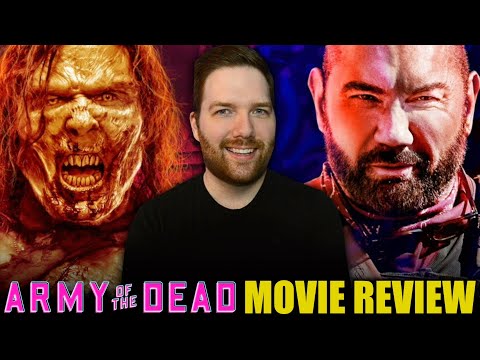 Army Of The Dead Is Directed By Zack

Snyder and this is his return to the horror genre after Dawn of the Dead in 2004, which is a film of his I really enjoy After a zombie outbreak in Las Vegas, a group of mercenaries led by Dave Bautista take the ultimate gamble venturing into the quarantine zone to pull off the greatest heist ever attempted. Now that movie theaters are starting to open again, and some folks are choosing to go out and see a film. I’ve been wanting to see a film that I can just relax sit back enjoy have a giant tub of popcorn and kind of forget about everything, and we don’t get that many of those movies anymore. A lot of things want to be very serious and remind us of the world that we live in and so I was very much hoping. that Zack Snyder‘s Army of the dead would do that for me and it did this movie was an absolute blast.

I Had Such A Good Time

with this movie. Just the opening credits scene alone is phenomenal. I feel like the opening credits of the movie deserve to be considered for future list of best opening credits of all time and Zack Snyder’s name is all over those credits not only did he take part in the screenplay, the producing and obviously the directing he’s a director of photography. He’s a cinematographer for the whole movie. There are instances throughout the movie where he overuses very shallow focus characters walk away out of focus.

He Doesnt Pull Focus With Him.

He just lets it stay soft the whole time. It’s a type of thing that I wouldn’t really reference. But it happens a lot and for some people that. could get really annoying it’s not like it took me out of the movie that much I just started to notice how often he does it What I really liked about.

This Movie Is That It Combines A Lot

of different kinds of zombies. You have your classic George a Romero zombies that are pounding against the cabin wall and they’re very slow and they’re kind of stupid you have your Danny boyle 28 days later zombies that are running at you really fast and they’re just gonna tear out your blumin jugular, but there’s also zombies in the film that are very smart. They call them alpha zombies. They’re in control of the others. Those zombies listen to them because this place is basically like a John Carpenter.

S Escape From New York Kingdom For These Zombies.

They have leaders they have ranks and that was really interesting. interesting just to see the whole mythology that he crafted behind this Las Vegas outbreak. I also liked Dave Bautista in the movie Quite a bit. I think this movie really showcases his range because I love him in Guardians as Drax, but he does have a surprising amount of range as an actor and he’s really damn good in the movie.

There were a lot of jokes that really hit for me where the film falters a little bit is in its very bloated run time. The movie does not have to be two and a half hours. A lot of Zack Snyder films are a little bit too long. I could easily see about 15 minutes of this movie being cut out.

Theres Scenes That Sometimes Go A

few frames longer than they really need to be The pace could be tightened just. Ever so much there’s a few times where it feels like information you’re getting just isn’t important and the scene could just end there. ‘s also times where Snyder goes for something that’s very surprising, but it also creates a disservice to the characters that he sets up. There are some scenes where you feel very invested in what could potentially happen for two characters and their future and he throws something in there at the last second that is dramatic and it creates a slow-motion sequence with somebody screaming and their voice echoes and it gets murky and it reverberates and you get a song that you might not expect to be in a zombie movie, which is a very zack Snyder thing that he likes to do so.

At Times He Will Sacrifice Interesting Character For

shock value and for some that will really work you might like the surprise of something unexpected happening. But I was a little let down that I was getting invested in characters that he was setting up and then suddenly he doesn’t seem to care about the future of those characters and I didn’t love how he chose to end the film. It feels like the movie has a definitive ending and then there’s like 10 more minutes again that’s something that snyder has done in the past, but honestly. I just had a really good time watching this movie.

a real movie again. Do you know what I mean like just in the theater there was only like five people there, but still like this big giant screen popcorn. It just everything felt right and the little nitpicks that I have about the movie. It didn’t stop me from having a great time.

Im Going To Give Army Of The Dead

a B If you feel comfortable going to a movie right now it isn’t theaters. If you don’t it’s going to be on netflix really soon either way. I think you should check it out, especially if you like his dawn of the dead movie guys thank you so much as always for watching look forward to more reviews very soon and if you like this you can click right here and get stuck manized you.

Army of the Dead is directed by Zack Snyder and this is his return to the horror genre after Dawn of the dead in 2004 . A group of mercenaries led by Dave Bautista take the ultimate gamble venturing into the quarantine zone to pull off the greatest heist ever attempted . The opening credits scene alone is phenomenal. Zack Snyder’s name is all over those credits not only did he take part in the screenplay, the producing and obviously the directing he’s a director of photography. He’s a cinematographer for the whole movie. The movie combines a lot of different kinds of zombies. It’s not like it took me out of the movie that much I just started to notice how often he overuses very shallow focus characters walk away out of focus. I had such a good time with this movie. But it’s a type of thing that I wouldn’t really reference. It’s not like I wouldn’t really reference to it. It happens a lot to be really annoying….. Click here to read more and watch the full video