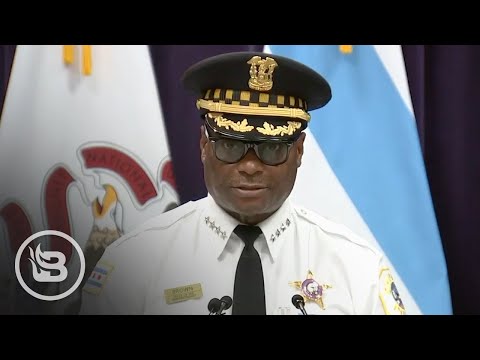 I I Made This Point In My Comments These

leaders act as as if there are no consequences to their behavior, and they based that on what happened previously that we made a lot of arrests during May and June and not. Many of those cases were prosecuted to the foolish extent and I think that’s my point in the mayor’s point we have to have consequences for the arrests that Chicago police officers make through great threat to their own safety. They’re being shot at to make these arrests and these looters these thieves. These criminals are emboldened by no consequences in the criminal system They get released many charges get dropped and so they feel emboldened to do it more do it more that is not a a you know a consequence of the officers not making the arrest the officers are making the arrest the consequences are. Once prosecution and sentencing comes up there’s no consequence, so we would we would argue that let’s have the criminal justice system here deliver a strong message to these criminals that there will be consequences for your behavior.

It It Almost Sounds As Though

you’re saying this is the reason we happened is because the courts and the prosecutors were not doing their job that they were going too easy on the looters from the last time around him. Don’t take it from me just go by what’s been done, but just go about what’s been done. There was there were no consequences for the people arrested the seeds for the shameful destruction. We saw last night were shown in the 5700 block of South Racine Avenue on Sunday afternoon officers responded to a call of a man with a gun. A suspect was spotted and officers attempted to interview.

The Individual Who Quickly Fled As

this person was running away. A gun held by this person was pointed at our police officers who gave chase and this person fired shots at our officers. Officers returned fire and struck the individual who was taken to the University of Chicago Hospital and expected to survive. The shooter is a 20-year-old man with four previous arrests for charges including burglary, child endangerment and domestic battery. I am relieved to say that none of our officers were hurt in this shooting.

A Gun Was Recovered From The Scene After

The First Incident Happened At A

store near the 87th and the Dan Ryan Expressway. Soon, car caravans were headed into the loop. This was not an organized protest. Rather this was an incident of pure criminality. This was an act of violence against our police officers and against our city.

As Of Now Chicago Police Have Made

more than 100 arrests for looting disorderly conduct battery against police Among other charges. A total of 13 officers have been injured throughout the night, including a sergeant who was struck with the bottle. Another officer had his nose broken as he fought with a group of looters In the last seven days. A total of nine officers have been shot at in Chicago, what we are seeing is violence against police, A security guard and a civilian were. struck by gunfire doing the melee last night in our downtown.

They Were Both Taken To Northwestern Hospital

in critical condition. Five guns were recovered during these incidents. In fact, CPD has recovered a total of 149 guns This weekend. Another 164 guns were handed in as part of a gun turning event on the west side. The unarrests in this city are up 15 percent this year compared to 2019.

In One Incident Last Night Officers Were

arresting a looting suspect at Michigan Avenue in Lake Street. This this person was carrying a cash register. He had looted out of a store as officers were making the arrest. Another vehicle passed by the officers and fired shots at the officers as their vehicle turned the corner resulted in an exchange of gunfire between our officers and these suspects. A bullet was found lodged in the cage of the police.

Vehicle So Far This Year.

Chicago police have covered 6 189 guns. Each of these guns recoveries as you can imagine has the potential to turn into a deadly force encounter with police as for the weekend figures officers made an outstanding arrest for murder, eight outstanding arrests for criminal sexual assault and two outstanding warning arrests for robbery and five arrests for aggravated battery Friday through Sunday 6 pm to 11 59. There were 31 shootings throughout the city, three of which were murders. These shooting incidents and the looting we saw overnight are completely unacceptable.

Criminals Took To The Streets With

confidence that there would be no consequences for their actions. Let me say that again criminals took to the street with the confidence that there will be no confidence consequences for their actions and I for one refuse to allow these cowardly acts to hold our city. Hostage TPD will not stand by as our beautiful downtown becomes someplace that people fear I have instructed our detective units to create a special team of investigators to look at the hours of pod camera footage from last night. We have high definition video of suspects and vehicles. If others have security video would you please forward them to CPDtip.

Com I Pledge To Pursue These Offenders To The

fullest extent of the law. A heavy police presence will continue throughout the downtown area today and until further notice officers will return to working 12-hour shifts and all days off have been canceled until further notice. We are Also working with other city agencies, including streets and sanitations, the CTa, the Department of Transportation and the state Police and other agencies in a multi-layered plan which will be based on lessons we’ve learned from earlier. This summer downtown access will be restricted from 8 pm to 6 a.

The department also has its eyes in the neighborhoods to ensure that looting does not spread based on our lessons learned officers would be will be deployed to in a large measure to our neighborhoods to protect the neighborhoods. This is a beautiful city and Chicago police officers will not allow this self-ish criminal act to destroy what generations of hard work have built.

Chicago police officers are being shot at to make these arrests and these looters these thieves are emboldened by no consequences in the criminal system . The mayor’s comments suggest that leaders act as as if there are no consequences to their behavior, and they based that on what happened previously that we made a lot of arrests during May and June and not . Many of those cases were prosecuted to the foolish extent and I think that’s my point in the mayor’s point we have to have consequences for the arrests that Chicago officers make through great threat to their own safety . Once prosecution and sentencing comes up there’s no consequence, so we would argue that let’s have the criminal justice system deliver a strong message to these criminals that there will be consequences for your behavior . The shooter is expected to survive. Police say he was taken to the University of Chicago Hospital and expected to be out of the hospital with a minor injury to his injuries. The shooter was shot in the stomach. He is believed to be a…. Click here to read more and watch the full video