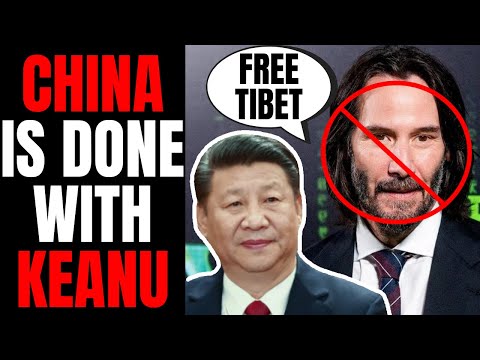 Keanu Reeves Is One Of The More Recognizable Actors

of the past several decades, being part of major franchises like the Matrix and John Wick, But if you are in China, it looks like you won’t be seeing Keanu Reeves anytime soon because he has been banned. He has been canceled by the Chinese Communist Party because he said something that they don’t like and isn’t it interesting how similar the reactions are for a totalitarian authoritarian communist state like China in the far left echo chamber because for both of them all it takes is one opinion that doesn’t align and all of a sudden you’re done. China cancels Keanu reeves over Tibet. Oh man and I will say at least the the silver lining that does come from this for the people of China is that they’re unable to watch the matrix resurrections that should be the one. Positive thing that comes out of this because that was one of the worst movies I’ve seen in a long blumin time.

featuring actor Keanu Reeves after he appeared in a virtual event hosted by Tibet House Us, a non–profit organization funded by the leader of Tibetan Buddhism. The Dalai Lama. Reeve’s name has also reportedly disappeared from Chinese social media platform. So he has basically been unpersoned by China that’s how bad it is and you know as kind of maybe laughable as it might seem like when it comes to counter reason his future in acting I don’t think he’s gonna like not be able to find work or anything but for some people this could severely impact them. Say if someone did a movie you knew that it couldn’t get released in China that there was no way.

Would Ever Get Released In China Or

ever make any money in China that might impact someone’s casting decision and that’s the case right now with Keanu Reeves. China’s erasure of Keanu Reeves was discovered on Friday by Reuters, which found that even Reeve’s. Most popular films blockbusters like the Matrix Speed Bill and Ted’s, Excellent adventure and John Wick have been removed from streaming services like Tencent and Ikea. I think that’s how you say that searches for both the English and Chinese versions of Reeve’s name produced no results on the popular wechat messaging platform. The Times discovered Monday that almost all movies featuring Reeves have quietly vanished from the streaming libraries.

The Incredibly Petty Chinese Censors Decided Not To

ban toy story 4 in which Reeves voices a toy stunt man named Duke Kaboom, but they erased the credits for the English voice cast naming only the local actors who performed the Chinese dub of the movie that is that’s pretty serious I guess even going in erasing the credits of this one small voice role why all of a sudden they decide to take this measure this exact moment. It’s a question we as outsiders might never be able to answer the system is so opaque that it’s pretty much impossible to pinpoint which agency or person is responsible says the Us-based researcher Alex You of China Digital Times Representatives for the Chinese streamer and social media platforms did not answer questions from Western reporters about the decision to cancel Reeves, who has not been shy about his long-standing interest. Buddhism. He started a movie on the subject in 93 and was ordained as a Buddhist monk in the Tibetan Himalayas in 2016. I didn’t even know about that Reeves has gone out of his way to work with the Communist censors to ensure his movies could be screened in China.

removing scenes in underground fighting in Beijing because the censors insisted underground fighting does not exist in Beijing. He also sportingly reduced the number of times. People got punched in the head during the film because Chinese sensors apparently have limits on things so he tried to do everything he could to make sure his movies were available in China, but all it takes is one appearance. One digital appearance like on a zoom call for a fundraiser boom and you’re cancelled just like for the left all it takes is one. One opinion one opinion on gender one opinion like JK Rowling‘s on biology that’s all it takes one time that you say well.

Maybe I Dont Know About Voting For That

person the left will cancel you in a heartbeat. They want you erased the same things that leftists that far left activists are doing for people like JK Rowling they want it erased they want her name erased from the Harry Potter movies. They want the books on they want her name gone forever. It’s so funny how similar these two entities are. Man of Tai.

Chi Was Touted As A Milestone In Cooperation

between Chinese and American production companies. The first film directed by Reeves, and while he appears in it he plays a sadistic villain. It didn’t fare well in the Chinese box office, but they appreciated reeves making the effort most outside observers believe the obvious. explanation was He was a headline performer of the 35th annual Tibet House U. s Benefit concert on March 3rd.

His Contribution To The Event Was Reading

a poem co-written by Allen Ginsberg. The Hollywood reporter described Reeves coming under savage attack in Chinese social media by Chinese nationalists, who demanded a retaliatory boycott of reeves. Most recent film The Matrix Resurrections Now here in America. A lot of people said they had wanted nothing to do with this not because of anything. Keanu Reeves had said about Tibet, but because the movie was dog blumin The movie was terrible and it flopped.

It Was A Complete And Total Embarrassment.

How can Keanu Reeves not understand this and take part in a pro-Tibet in independence concert Aren’t these celebrities afraid of losing the China market. The film can be taken down now get out of the Chinese market. Thank you? These high school graduates in Hollywood can’t even identify where Tibet is on the map, but they care if people there are leading a good life that’s pretty interesting so that’s some of the reaction you see as the Hollywood reporter Impishly noted the matrix resurrections is pretty much boycotted itself having earned a poultry 12. 5 or 12.

4 Million At The Chinese Box Office.

So the sensors evidently decided to aim higher by wiping out reeves entire filmography that is nuts, but that’s all it takes that’s all it takes is one opinion one opinion you hold to get you cancelled from China in the same way that one opinion will get you cancelled by the woke mob. What do you guys think about this let me know in the comments below smash the like button subscribe to the channel ring the Bell for notifications share this video. out there and I’ll talk to you later thanks for watching everyone and a huge shout out to my patrons.

follow me on Twitter Instagram check out the description below you’ll find links to my P.o box and my patreon as well. I’ll talk to you guys later.

Keanu Reeves is one of the more recognizable actors of the past several decades, being part of major franchises like the Matrix and John Wick . He has been canceled by the Chinese Communist Party because he said something that they don’t like and isn’t it interesting how similar the reactions are for a totalitarian authoritarian communist state like China in the far left echo chamber because for both it takes is one opinion that doesn’t align and all of a sudden you’re done . The silver lining that does come from this for the people of China is that they’re unable to watch the matrix resurrections that should be the one.& Positive thing that comes out of this because that was one of . the worst movies I’ve seen in a long blumin time. I don’t think he’s gonna like not like not being able to find work or anything but for some people this could severely impact them but for many people this may severely impact their future in acting, he says . He doesn’t think it’s funny ….. Click here to read more and watch the full video