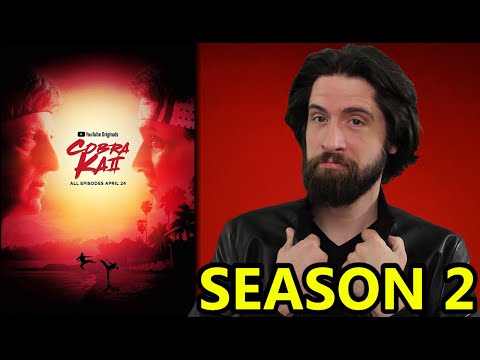 Wow Those Lights Are Bright Hold On

all right now Thumbnail John Crease Bane stance all right so Cobra Kai Season two. I know I was gonna do a video on Cobra Kai season two and season three came out but there’s no real foreseeable release date for season three plus Cobra Kai just came to Netflix recently-ish some weeks ago Point is I watched it all from episode one of season one through season two. It just gets better and better every time. I watch it also spoilers because I have to talk about the end of this season. I have to because it’s a big part of the impact.

It Leaves You With In Fact

it’s it’s all that so spoiler alert watch Cobra Kai season 2 before you watch this you just should and Cobra kind of season 2. It does what a sequel should do is. Just it steps it up. It raises the stakes without losing what it was that made it enjoyable to begin with Season one ended. Miguel wins the tournament and John Crease shows up which total Mandela effect.

I Thought Martin Cove Had Died.

I don’t know why I just and so in the show and he was like Oh he’s dead I’m like yeah. They wrote him out of the universe because there he is he was a great addition to season two he shows up right when Johnny’s like okay. We got to go back to the drawing board a bit because Miguel was fighting dirty and I don’t want to be that karate teacher that tells my student to sweep the leg or I don’t want my students to at least believe that that’s how they should fight it just shows that Johnny does want to do right. By his students, he wants to be a good teacher then enter the devil who kind of gets the ear of some of the students and things start going bad for Johnny, but you do see why Johnny wants to you know he wants to give this guy a second chance.

Though I Would Argue If Youre Dealing

with that guy he had second third and fourth chances well. One of the things I always liked about Cobra Kai is it showed perspective you know it’s really good at showing you the perspective of the other side. In Cobra Kai seasons one and two Daniel comes across as a bit of a smarmy prick. He’s always passive aggressive to Johnny talks down to him. They’re at that restaurant.

He’s like what Daniel’s like nothing Johnny enjoy your course. I’m like wooly Wood before you said that. Dick and you look back at karate kid and you’re like yeah He kind of was then too. I mean I know we’re supposed to root for him but really going back and watching karate kid After Cobra Kai, you see it with different lenses.

I Now See Daniel As This Kid With

a short fuse who’s pretty quick to get into fights that might have been on the path to be an bleep but Mr. Miyagi found him and put him on a good path. It actually makes the karate kid mythos a bit deeper and those are the layers to karate kid that Cobra Kai. The series is retroactively peeling back and exposing and you see that with Hawk Hawk has become full-blown bully mode when you look back to where Hawk came from. You see a bit of a flashback with Hawk.

This is how bullies are made but John Crease isn’t the only addition to season two stingray Paul Walter Houser. He’s he’s so ridiculous I just find the guy so funny. He’s funny and endear. He’s a perfect fit for Cobra Kai is he too old to be in that dojo absolutely but they joke around with that but in gushing about what I like about Kobra Kai, what works for me the point is it just has a remarkable amount of heart.

The Whole Things About Redemption.

The whole thing is about Johnny trying to be the best version of Cobra Kai possible whether it be the start of a romance with Miguel’s Mom and Johnny whether it be really the father-son relationship with Johnny and Miguel. All stemming from the fact that he was an absentee father and he feels that he knows his mistakes. He recognizes that he wasn’t there for his son and if his son would have him now he would be a father to his son, but his son’s just resentful. So when this father-son relationship between him and his student Miguel.

He Sees The Opportunity To Be

the father he never had and the father he never was there’s something nice about that you know it’s like it makes you you just root for Johnny, but for me a surprisingly enjoyable and surprisingly heartfelt part of this entire season in season two. He caught up with his old Cobra Kai Buddies just yeah It’s like all right Johnny’s on this path, but how are they like one’s a pastor. Now They’ve all moved past Cobra Kai, but then they start talking about how John crease messed them up and they took those lessons into their adult lives, and when you’ve learned that rob garrison the guy from karate kid You know the Johnny kid of a party bad guy that guy he dies in the show, but he also died in real life. It makes it sad it makes it a real good buy. I was just kind of crushed to hear that point is Cobra Kai’s season two would wherever it had to step it up.

You Know Do That Next Chapter

make the stakes higher but don’t lose who you are Don’t lose what made season one great it does. all that I think it did it very well. It does still have the teen drama absolutely. I’d be kind of baffled if it didn’t because that’s how teenagers in high school are I mean you’re still dealing with teenagers in high school and every karate kid movie has a romantic interest. So whenever it starts to overcook it on that angle and this girl breaks up with this guy now she’s saying this guy.

This Show Still Keeps Me Focused

on what I like about the show and yes the catalyst to the big throw down at the ends was it literally is a girl saw her boyfriend kiss another girl fight ensues in school just look at that information it doesn’t seem too spectacular but my God that fight was damn entertaining and I like the fact that all right season one we had our tournament season two. You have a straight up fight. These kids are out for blood man. I mean the warring dojos of Cobra, Kai and Miyagi do dojo. It’s come to a head and I suppose I just I give that catalyst to pass because a well you’re talking about a fight in high school how else would it go down but two it leaves you on a very dark note because Miguel shows mercy and then 90s Heartthrob team Dude Johnny’s son in this show looks like the flash went back in time Snatched up some 90s Heartthrob from 1995 ran through the speed force dropped him off in 2018 and was like here You go Cobra Kai have fun the point is Miguel gets knocked over a rail falls down a flight of stairs smacks his back.

Hes In Bad Shape And The Fact

that it leaves you on that note. I think is so good because it just gives you time to soak it all in I’m left thinking about Johnny’s left playing that really Somber rendition of Curl Summer. It’s a great version. I may or may not have listened to it quite a few times which cruel Summer played in the original karate Kid when Daniel was at school. I think it was his first day at school.

Then It Plays In Cobra Kai

Season 2 the very last episode when they go back to school after summer. Then it plays this version of Cruel summer when Johnny’s just reflecting on his failures. You really feel like Johnny wanted to redeem his past with the present. You know he wanted to do right by his students. He wanted to do right by Miguel and he was so close to it.

I Saw A Little Bit Of Fan

This Season With Flashbacks And Execution Builds

up what Cobra Kai means to Johnny and you really feel the fact that this guy wanted Cobra kai as it should have been you know remembered Lord of the rings when Gandalf comes back Gandalf the white and he was like I am sorry man I’m sorry man as he should have been that’s Johnny and Cobra kai. Johnny’s like this is Cobra kai, but it’s Cobra Kai as it should have been then John Crease comes in and makes it Kobrakai as it always was then Miguel Johnny’s surrogate Sun figure gets possibly paralyzed. Miguel’s Mom wants nothing to do with Johnny. After this, I don’t want to see him anymore cherry on top At least he can go back to the drawing board Nope He lost Cobra kite to John Crease and that’s just what he’s left with he walks. away which weirdly? I find that to be like that’s a good ending to the story.

I Dont Know What Season Three Is

They Have To Stop The Threat Of

Loki and then it builds and there are more avengers and then they have to stop Ultron which Tony Stark also created and then it builds and Thanos is coming and thanos is like Nope happy you get vaporized evil wins the end that’ll teach you to be good because good is dumb. It’s just something really dark and messed up, but i don’t know it’s a good ending. It’s not a fulfilling ending, but it’s just one of the maybe I’m in a dark place maybe 20-20 did that to me and when failure happens in Cobra Kai when action and consequence happens when the youth in the show make a decision that leads to bad things. You feel the gravity of that failure and more importantly, you feel the gravity of that failure on the shoulders of the previous generation.

And More Importantly Than That You Feel That

those characters feel it. It’s not just enough that you feel it. You gotta know.

Cobra Kai season 2 does what a sequel should do is.& Just it steps it up.& It raises the stakes without losing what it was that made it enjoyable to begin with Season one ended.& Miguel wins the tournament and John Crease shows up which total Mandela effect. I thought Martin Cove had died.& I don’t know why I just and so in the show and he was like Oh Oh Oh he’s dead I’m like yeah. They wrote him out of the universe because there he is he was a great addition to season two he shows up right when Johnny’s like okay.& We got to go back to the drawing board a bit because Miguel was fighting dirty and I don’t want to be that karate teacher that tells my student to sweep the leg or I . don’t want my students to swept the leg . It just shows that Johnny wants to give this guy a second chance.& Though I would argue if you’re dealing with that guy he had…. Click here to read more and watch the full video