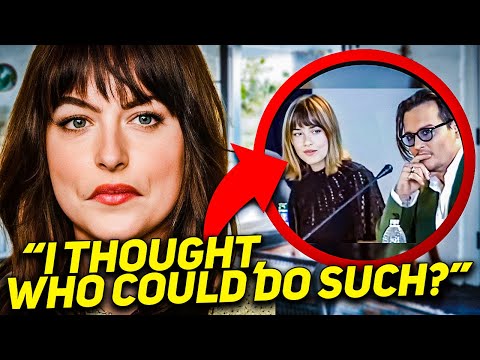 I Knew Johnny Depp From My Childhood

he was friends with my dad and Hunter Thompson, My dad and Hunter were very very close. He’s a creature he’s like a um. He’s a real true artist Dakota. Johnson has seemingly reacted to a clip of her conversation with Johnny Depp that went viral during his trial with Amber heard Dakota had allegedly noticed Johnny’s bandage middle finger back in 2015 and she was questioned about it. In an interview, the actress had a few words to add about the depth versus her trial as she revealed whose side she was truly on so what did Dakota say In the interview, what is her history with Johnny Depp keep watching to find out Dakota.

Johnson Reacted To An Old Video

clip of her and Johnny Depp, conversing that went viral recently as depp’s defamation trial against Amber heard gained national attention. The Youtube video titled The Exact Moment Dakota Johnson knew Amber heard was violent toward Johnny Depp shows Johnson reacting in 2015 to depp’s bandaged middle finger an injury. He claims heard caused the video has been viewed 4. 1 million times. Johnson told Vanity Fair that she had seen the video for the love of God why Dakota exclaimed when she saw the old clip once again what am I doing here? She told Vanity fair about the viral video during dep’s trial.

I Dont Remember That At All

she added but please take me out of this don’t let this get any worse can you imagine oh my God. If I was called to testify. I can’t believe people are treating the trial like a reality show. It’s like a courtroom drama and my heart breaks for them. It’s completely insane humans are truly bizarre.

The video in question was an old interaction between the two Hollywood A-listers. Johnson and Depp were promoting black mass at the Venice film festival at the time. Johnson is seen looking down at Depp’s finger, making a comment to him and then sitting back in her chair and laughing after Deb appears to explain the injury. Johnson’s body language in the video has been since interpreted as skepticism on her part with some assuming she did not fully believe Depp’s explanation.

Many Were Quick To React To Dakotas

comments about the video. One fan stated that I’m pretty sure she’s self-absorbed based on the statement and for the love of God. Why are we subjected to her because her parents are talented. Another added that at the very least she is finally honest about it. Whereas the first and second films were.

other fans reacted differently like one fan stated that a different response could have been for is Dakota Johnson to question herself should I have noticed that Johnny Depp was being abused and could I have done anything to help him get away from the abuse Instead, she labels those who advocated for hashtag justice for Johnny Depp is weird on that a fan replied that they’re most likely not that close also you can’t blame someone for failing to notice something insane that’s also I believe she refers to fans who exaggerated and religiously circulated. The video was weird rather than people who wanted justice. One more fan commented on the video that Dakota made an odd statement when Jd was cancelled years ago, where was she now. She’s talking about the cancellation of ah if you’re going to make up hideous. And horrifying lies about someone with clear premeditated and malicious intent.

You Should Be Completely Cancelled Thats Too

bad for Ah to be so sad. She can cry me a river and then f off one fan. Further said that as a woman I believe that any man who is abused has the right to defend himself fight back and flee you’re not a lesser man and you have every right to defend yourself. If a woman physically or verbally assaults you you can and should confront her about it never be ashamed of yourself. I hope Johnny’s case outcome gives you hope another said that I really like how bright this case is for two reasons.

Number One Justice Is Being Served For

Johnny Depp and his struggles with such a horrible woman and number two. This case demonstrates that abuse occurs in both men and women and it. should not be stereotyped that it only occurs in women anyone can abuse anyone we should not stereotype it. One more user said that Dakota ranks high on the list of truly wonderful celebrities. She’s also an animal rights activist who saved a bunch of horses Don’t quote me on this I don’t remember the exact details on the spur of the moment Dakota, Johnny and Tom Hiddleston are three celebrities who will always have my admiration for their generosity and beautiful hearts.

Johnson has previously revealed what it was like to collaborate with Depp, Unlike Jason Momoa and Patrick Wilson, who appear to have avoided commenting on their aquaman Co-star heard entirely. Johnson had no qualms about discussing her co–star Depp, with whom she worked on the Netflix crime drama Black Mass. In fact, she told Vanity Fair‘s Krista Smith in 2015 that working with him was the most gratifying thing she’d ever done and that the experience was inspiring. Johnson was left speechless at one point trying to find the right words to describe the pirates of the Caribbean Star.

She Settled On Calling Depp, A Unicorn

who brought to light the dark and dreary set every day with the help of Smith. Scott Cooper, the director of Black Mass also praised Depp in the same interview saying that he chose him for the role of Whitney Bulger because he could trust in his ability to give an emotionally and psychologically true performance. He described the veteran actor as a soulful, thoughtful and gentle-natured individual whose inner transformation for the film was truly captivating to watch. Johnson and Cooper are two of many high-profile figures who have praised depp contradicting herd’s claims in the latter part of the interview, where she reacted to the clip. Dakota then admitted that she was wary of the cancel culture and stated that there were things she would never say publicly due to the risk of her career.

culture is the concept of cancelling a human being as if they were an appointment, Nobody will avoid making mistakes in their lives. The point of being alive is to figure it out. She explained to vanity fair it’s not okay to hurt or harm other people. She added for those actions have consequences.

But The Idea Of The Twitterverse Deciding If

someone suddenly ceases to exist is horrifying heartbreaking and wrong it will I believe pass. I believe that in the end people want to live in a better world. Also twitter accounts for what 12 percent of the global population. Some of these people don’t even know how to spell in the video with Vanity Fair.

The 50 Shades Of Grey Star Also

reflected on her previous work. Johnson recalled landing a role on the office series finale in 2013 because she was a fan of the hit comedy I’m only in it for three minutes. But I spent two weeks on that set. The actress recalled every day.

I Was There All Day, But

I did meet with Rayne Wilson and I now see him on planes all the time. She continued saying I felt like I was barging into someone’s birthday party when they hadn’t intended to invite me as if they did it just to say yeah sure come and then I was. Trapped the actress also spoke out about her role as Anastasia Steele in the Steamy 50 Shades of Grey films, calling them psychotic, but admitting that she doesn’t regret starring in the dramas What do you think of Dakota’s comments on the trial Let us know down below make sure to like and subscribe for more.

Johnson has seemingly reacted to a clip of her conversation with Johnny Depp that went viral during his trial with Amber heard . The Youtube video titled The Exact Moment shows Johnson reacting in 2015 to depp’s bandaged middle finger an injury . Johnson and Depp were promoting black mass at the Venice film festival at the time . Johnson is seen looking down at Depp’s finger, making a comment to him and then sitting back in her chair and laughing after Deb appears to expla . She told Vanity Fair that she had seen the video for the love of God why Dakota exclaimed when she saw the old clip once again what am I doing here? She added that she can’t believe people are treating the trial like a reality show. It’s completely insane humans are truly bizarre. The internet is a dangerous dangerous place. The video in question was an old interaction between the two Hollywood A-listers . Depp is a real true artist Dakota. I don’t remember that at all she added…. Click here to read more and watch the full video