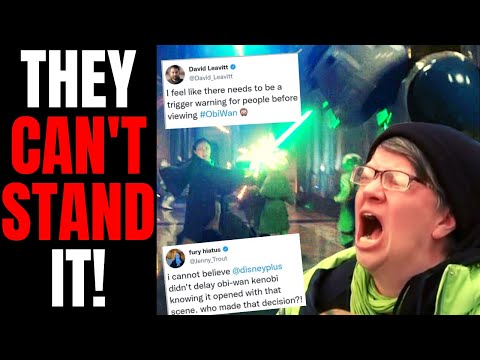 Some Disney Star Wars Fans Had An Absolute Meltdown

after the first episode of the Kenobi series, not because the acting was terrible not because the writing was cringe not because Star Wars continuity is still being destroyed. No instead they had a meltdown because they were triggered over a certain scene. A certain scene that is shown in the prequels and yet at the same time they just can’t handle it they should have cut it from the series. You can’t show things like that and as a result, Disney has bent the knee and added a trigger warning. Disney adds content warning to Obi-wan Kenobi in light of the Uvalde shooting.

The Move Follows Netflix Decision To

place a similar warning in front of stranger things. But do you think that it’s enough to add a content warning Of course it isn’t some people want the scene cut. What scene are we talking about well spoiler warning even though it’s not really a spoiler because we saw this happen in 2005 in revenge of the Sith, but hear from Data Racer SJWs were traumatized by the first episode of Obi-wan saying it has a quote triggering school shooter scene that made them cry the kids in the fictional show were protected by a Jedi and escaped alive again. It’s it’s just a different view on order 66 that’s how the Kenobi series starts out and you can see a couple scenes from this the the younglings running around while they’re being protected by Jedi Clone troopers trying to get after them right you see them go through Oh no a Jedi dies. The younglings survive and continue on the path to try to escape the Jedi Temple.

We Know What Happened During Order

66. This is not a. Yet at the same time look at the people that are having an absolute meltdown over this Oh wow trigger warning for the cold open of Obi-wan had to pause and literally sob it’s Order 66 Jedi protecting Younglings okay huge trigger warning needed in the first few seconds of Obi-wan given the recent events. It literally starts off with the attack on the Jedi younglings in their temple school. What the f was Disney thinking releasing this today without warning us about that this there’s no way to say this.

You know what Order 66 is we’ve known what order 66 is for 70 or 17 years now. This is pathetic. If you need a warning for this this is not real life. This is a Tv show set in a different universe.

You Need Trigger Warnings Are You

kidding me do you need trigger warnings. You see someone get gunned down in the street because that happens in Chicago several times each and every day. I didn’t think so but let’s continue on Disney plus Obi-wan should have trigger warnings after you’ve all day. The first scene nearly made me vomit. This is their fans.

This Is The Fan Base You Have Cultivated

Disney Star Wars Fair warning the cold open of Obi-wan is a bunch of jedi kids being gunned down by Storm Troopers and saved by a Jedi teacher sacrificing her life. It’s super blumin Tragorain. I can’t believe they released this right now huge trigger warning exactly five minutes in there’s a scene that’s rough to watch right now just a warning for anyone watching Kenobi I needed a warning. Intro to first episode involves order 66 and in light of recent events, it’s very hard to watch it over. over again look at all of this look at this guy today.

I Cancelled Our Disney Plus Subscription Because

of all the glorified violence in their shows. I’ve been contemplating this for a while reluctant because my kids enjoy it but today’s Obi-wan Kenobi show is a bridge too far them showing Order 66 was a bridge too far not even four seconds in and there’s a school shooting the intro to Disney’s. New series is pretty triggering. Opening scene really triggered with current news over and over and over again. This is the fan base that you have cultivated holy blumin and of course they did they did put a trigger warning in there.

Although This Fictional Series Is A

continuation of the story from Star Wars movies filmed many years ago, Some scenes may be upsetting to viewers in light of the recent tragic events warning. contains violence involving children? We need a trigger warning for Disney Star Wars fans and even that’s not enough for them a lot of them just want it cut from the show entirely. They don’t think that it should have been put out. Like this. They think that Disney needs to cut this it is not okay Disney Star Wars.

This Is The Audience You Asked For.

This is a scene that was filmed. I mean had to be filmed at least a year ago or something like that if not many many months ago. This is the release date. It happened to release the pat the fact that people are actually demanding that they cut this scene because of recent events that’s insane to me.

That Is Absolutely Blumin Insane.

But that is where we are at it is a show what happened to evol day is. Is an absolute tragedy just like every time anyone loses their life. Just like any time.

Any Insane Person Goes Out With The Intent

to hurt innocent people. It is a terrible thing, but it is something that happened the fact that they want the Obi-wan Kenobi series to cut that out pathetic. There’s no other way to say it it is absolutely pathetic. Let me know your thoughts in the comments below smash the like button subscribe to the channel ring the bell for notifications share this video out there and I’ll talk to you later thanks for watching everyone and a huge shout out to my patrons.

I Appreciate You Guys So Much Want

to follow me on Twitter or instagram check out the description below you’ll find links to my P.o box and my patreon as well. I’ll talk to you guys later.

Some Disney Star Wars fans had an absolute meltdown after the first episode of the Obi-wan series, not because the acting was terrible or the writing was cringe . Instead they had a meltdown because they were triggered over a certain scene . The move follows Netflix decision to place a similar warning in front of stranger things . Netflix has also added a content warning to the series following the Uvalde shooting . Do you think that it’s enough to add a warning? Share your thoughts with us at iReport.com/stories/dailymailonline.co.uk . Back to the page you came from.com or click here for more Star Wars news stories. Please share your thoughts . In the comments section, please share your story . In The Star Wars Open airs, please submit your photos and videos from the comments below this article. In the open version of this article please share a photo of this image and video from this version of the original version of The Open Star Wars open/view….. Click here to read more and watch the full video