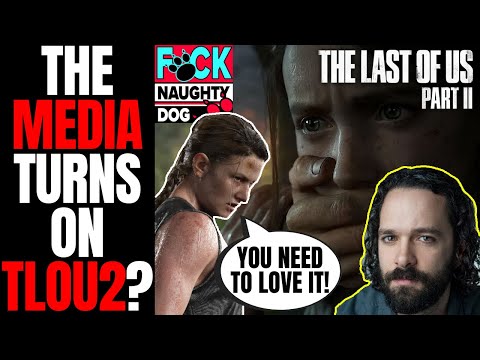 with RK outpost, and it’s not really a surprise that all along the way Neil Druckmann and Naughty Dog’s best friends have been the games journalists the media are the ones who refuse to properly talk about these leaks and then when people did talk about the leaks. The media were the ones who refused to talk about Naughty dog and their false copyright abuse that they used to silence any criticism like they did on my channel. The media are the ones who told you that this game is a masterpiece that it is absolutely the game of the generation and if you don’t agree, then you get labeled an istaphobe. You get labeled racist a bigot transphobic whatever it may be to try to silence any dissent regardless of what actual gamers think but now even members of this game’s media. are turning against Neil Drockman and Naughty dog and saying that in fact it really doesn’t Deserve to win some of these awards, but first let’s go ahead and take a look at what some of the shills are still up to you have Brian Altano from Ign someone who’s been going after and trying to get the quartering D platform for the past several days shout out to the game awards 2020 for a giant welcome reminder that the last of Us Part 2 was absolutely blumin amazing and then of course you have people like Greg Miller kind of funny kind of funny who have been absolute shills for the last of us.

The entire time well deserved congrats Last of Us Part two hashtag the game awards you have members of the media like it’s screen rant trying to say that the last. Last of us Part two Reddit is losing it over the game awards win, saying that critics of the last of us Part two are essentially having a meltdown in their subreddit, but when you go over to the subreddit and you look strangely enough. There’s no there’s no tears right. There’s no people crying about this.

Its People Laughing About This.

You Want To Try To Say

Laura Bailey Is The Only One Of These

that didn’t get ratioed probably because it was linked to the last of a subreddit, so a bunch of them tried to upvote it. So it wasn’t ratioed anymore, but you can see you can see the theme here. People don’t like the last of us part two you. Can see it when you look at the Metacritic. We knew this a bunch of the low scores were even taken off of there.

While The Fake Positive Scores Remained On

Metacritic. We saw that all along and then when the players actually got their voice. Ghost of Tsushima was the winner. Like we have said a deserving game of the year winner, but now even some members of the media are starting to speak out against naughty dog now This is from forbes Eric Kane of course the last of us part two one game of the year, whether or not it deserved it Now Eric and I had a run in with Eric Kane several months ago when we were talking about false copyright strikes because he hadn’t heard anything about it and I went at him on twitter a little bit he went at me. We had a little back and forth but honestly.

I Think That This Is I

think this is a reasonable article and he puts out a lot of reasonable articles. Don’t always agree with him, but I think he does his best to kind of look at all sides of it. Naughty Dog’s last of us too is one of those video games that’s pretty much destined to win game of the year whether or not it deserves the award. There’s so much heft and gravitas in an industry-wide group think with this sort of game people say it’s super deep so it is people say it’s a masterpiece so it becomes the critical Darling swept up in a wave of praise. It takes off all the right boxes with the right people to the point of where saying it’s not the best game of the year is almost verboten.

Makes You One Of Them Now

What he’s saying is that if you don’t if you’re in the games journalists industry if you don’t say that last week’s Part two is the game of the year they say Oh look at you you’re one of these people. You’re one of those people that just hates Sjws you’re one of those people that live in your mother’s basement that is what he is saying with this article. He’s saying that you knew that this was going to happen because of the group thing that surrounds the industry and he’s a hundred percent correct and then this is the big one Kotaku games made under crunch conditions Don’t deserve best direction awards now This is from Ian Walker I’ve had some run-ins with Ian Walker before because honestly a lot of it takes a blumin, but this is a great. Point this is something we’ve been saying the entire time Naughty Dog. It has the crunch that Naughty Dog put on their people.

70 Staff Turnover Thats What It Resulted In.

We we talked about cyberpunk a little bit that’s nothing nothing compared to what happened at Naughty dog. The fact that it wins studio of the year. The fact that now it wins best direction is absolute insanity for a lot of these reasons put here Last night. The last was part two walking away with the game awards with seven trophies.

Arguments Can Be Made As To Whether

it deserved those or not, but I think it’s pretty obvious that no game that required its developers to crunch. Like the last of us Part two did should be given a best direction award which the last was two. Somehow also won well. The reason Ian is because the. Vast majority of people like you people in the games journalism industry voted for this game.

They Praised This Game And Tried To Silence

any dissent that wasn’t praising this game. We have seen it all along now. Neil Druckmann’s greatest allies the game’s journalists are even turning against him how sad. According to last of us game. According to the Game Awards website might as well be the last of Us website.

The Best Direction Award Is Given

for outstanding creative vision innovation in game direction and design. This description makes it clear that the responsibility for winning or losing this award rests squarely on the shoulders of people in charge of leading development in this case that would be director Naughty dog co–president Neil Druckmann, who is often credited as the author behind the game’s successes yes. Neil Druckmann, the man who wants to be in Hollywood. The Who really wants that Hollywood success and tries to bring it to video games everything that people hate about Hollywood elitist. He tried to put in his video game and shockingly shockingly.

People Blumin Despised It So Even

some members of the games journalism community coming out against Neil Drockman coming out against naughty dog now. We know we know that this game did not deserve to win. We know that but we also knew that it always would win as soon as I started talking about the game award as soon as I got those nominations and I showed everyone that yeah there’s essentially no fan voting. It’s all games journalism We knew what to expect.

That Is Why When You Go To The

last of Us two subreddit, which is not a pro-last of Us two reddit it’s an anti-last of Us two reddit. Reddit that’s what it got turned into after Neil Druckmann destroyed all of these characters that’s why they’re not freaking out that’s why there’s no tears over there they’re laughing at everything that happened they’re laughing as you guys get ratioed for continuing to push this narrative the last of us part two should have been the game of the year that it was the best game actual gamers know that that is not the truth actual people who play these games right and do it They pay to play these games. You are paid to play these games and that is the difference, but even some of these people now turning against Neil Druckmann let me know what you think about all this. In the comments below, smash the like button subscribe to the channel ring the Bell for notifications share this video out there and I’ll talk to.

You Later Thanks For Watching Everyone

and a huge shout out to my patrons. I appreciate you guys so much want to follow me on Twitter Instagram check out the description below you’ll find links to my p. o box and my patreon as well.

Last of Us Part two Reddit is losing it over the game awards win, saying that critics of the last of us Part 2 are essentially having a meltdown in their subreddit . But when you go over to the subreddit and you look strangely enough enough. There’s no there’s no tears right.& There’s people laughing about this.& It’s people making fun of Neil Drockman making fun at the game . The entire time well deserved congrats Last of US Part two hashtag the game Awards hashtag is being used to say that the last.& Part two. is absolutely the game of the generation and if you don’t agree, then you get labeled an istaphobe.& You get labeled racist a bigot a bigot transphobic whatever it may be to try to silence any dissent regardless of what actual gamers think but now even members of this game’s media. are turning against Neil DRockman and Naughty dog are turning to say it doesn’t deserve to win some of these awards…. Click here to read more and watch the full video