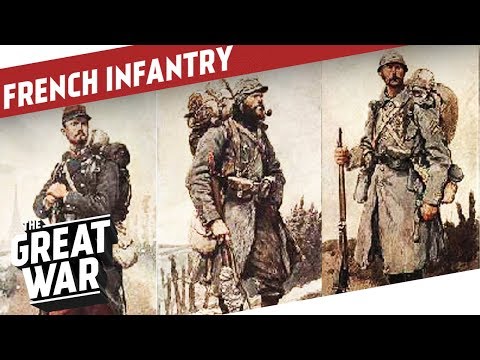 In The Public Mind, The First World War Is

often seen as narrow,-minded or stubborn officers sending wave after wave of men to die going over the top from the trenches. IN reality, the war saw the nations fighting it undergo the most profound and radical military revolution I their histories. We ve looked at several of these so far, and today I m to look at France.

m Indy Neidell; welcome to a Great War special episode about the evolution of French infantry doctrine during the First World War. To look at that, though, you really have to go back to France s defeat in theNK] War in 1871. French leadership saw the defeat as an intellectual one.

The The Prussian High Command Had Given

its officers a greater sense of purpose and tactical flexibility, and that army overwhelmed a French one that was not only underprepared, but had no clarity of objectives or united leadership. The Third French Republic completely overhauled the military, and after 9 years of reforms. The French War Academy was founded. Garrison Libraries were instituted in 1871 to promote intellectualism and initiative; there would be 200 by 1914. Soon, each branch of service had a monthly magazine.

Officers Of All Ranks Were Expected To

hold conferences and write essays. The mobilization that had been chaotic became thoroughly planned and the railway networks that had been poorly exploited were expanded and fully integrated. But. The French leadership overemphasized what it saw as its flaws or the enemy s virtues.

The Defensive Stance, The Passivity, And

the belief in superior equipment of 1870 became Anathema. Even, the adoption of the Lebel Smokeless rifle in 1886 that guaranteed accurate and lethal fire on an individual level did not shake off the anti–materialism of the new generation of graduated officers. The concept of leadership capable of leading the troops to victory by superior morale became widespread, and the solution to the lethality of the modern battlefield was simply French Élan. Now, the German military did not share this anti–materialism, having drawn the correct lessons from 1870-71. The British and the Russians had, by 1914, benefitted from the lessons of the Boer Wars.

France of course took away lessons as well, particular those of artillery and concealment,, but the lack of practical experience and centralized leadership delayed implementation. By 1914, Germany had a huge advantage over France in artillery and machine guns, and also in manpower, having outgrown France enormously over the past three decades. . training always toward offense was the answer, which is sort of the opposite of the trench war that was coming.

Uk Is Not In The Excess Of Cautiousness

that we must search safety; but rather in the disposition of our troops in a way that always guarantee our combat readiness.. The real defense of a marching column lies in its ability to launch an immediate counter-attack. . .

While This understanding of modern war is erroneous, it does contradict the idea that France entered the war without a doctrine that was-in its context-coherent. The first hostilities of 1914 quickly revealed the flaws of the system. On August 14th for August 14th, for example, near Plaine, repeated bayonet frontal assaults were shattered by German machine guns and artillery,. While the same day, two batteries of 75mm field guns disregarded the rules and made a joint action with the infantry-a fixation barrage with outflanking movements-that forced a German withdrawal.

was forced to hugely adapt and evolve. Over 40% of the commanders of large units were removed for incompetence or insufficiency. During this time,, and already in August, UK issued notes based on battle UK Conquered territory must be manned and defended with artillery to prevent counter attacks. The enemy must first be engaged with skirmishers and artillery before the main assault. The infantry must wait for artillery support, do not let the troops needlessly expose themselves.

There Were More, And In Early September.

New instructions were issued about building trenches. However, However,, even though French leadership had now realized that firepower kills, assimilating. This was a work-in-progress and it was tough to overcome the damage done by prewar military education. General Fayolle wrote in January 1915, UK having a lot of difficulties trying to organize the construction of trenches by the troops.

. my men are more interested in dying than working. He wrote in December that year.

, Uk Truth Is That Nobody Was

prepared for this war of positions.. . we all had the greatest disdain for fortifications and entrenching works. Our whole education has to be reworked.

. War cannot be improvised. The Northeastern part of the country was occupied, and France had lost 60% of its coal and iron mines, so 1915 was a year of frantic reforms aimed at replenishing worn out artillery, depleted ammunitions, stores, and the nation

Still, Joffre launched two major offensives to draw. Away from Russia and to experiment with new ways of using artillery. . They really also tried to teach the lessons of 1914-wounded veterans replaced military instructors and dedicated instruction centers were created.

troop instruction took time, and it was only in late 1915 and 1916 that the French Army was again really innovating. That period saw all sorts of material upgrades, from the Adrian Helmet to the Chauchat light machine gun, grenade launchers, and even the wheeled field kitchen. . The French leadership The French leadership devised new doctrines for methodical battle, with cooperation between infantry and artillery, and the primacy of material over men. The Shackles of 1871 had finally been broken, and the dramatic increase of firepower at the divisional level and enthusiasm for experimentation would be instrumental in turning the tide at the Battle of Verdun.

Local Superiority In Material, A Rolling

artillery barrage, and a thoroughly trained and equipped infantry would propel Robert Nivelle from success at Verdun all the way to Chief of Staff, replacing Joffre. In December 1916. He began the modernization process that would ultimately lead to the creation of the modern French Army, but though the men were trained to fight within a system, and the branches coordinated actions, his strategy was flawed, as the speed of the infantry was subordinated to the artillery,, which could only keep up as preparations allowed. SO when Nivelle attacked on a large front with unlimited objectives, especially against the new German defenses the Hindenburg Line,. It was a catastrophe, made worse by Nivelle

S Refusal To Call It Off For Weeks.

SO. Nivelle was out and Philippe Petain was in. Finally a true convinced modernist who had been in favor of modern methods since well before the war. He implemented a second rearmament program to give the army Renault UK tanks, infantry trucks, more planes, but more importantly, the logistical means to properly exploit a breakthrough of the German elastic defenses.

Once The Critical Mass Of Material Required

had been secured. TWo conditions were necessary to bring about a war of movement in the Allies favor; guaranteed local superiority in both firepower and manpower and the motorization of the infantry and artillery to keep the initiative during exploitation before German reinforcements could arrive by rail. This. methodology worked well in limited offensives like the Second Battle of Verdun and the Battle of Malmaison, and really, for the first time in the war, the French Army was truly playing in the same league as its adversary. They now understood both German defense in depth and infiltration tactics.

However, The Disaster That Hit The

Italians at Caporetto and Russia leaving the war forced the Entente to concede initiative to the Central Powers, and as 1918 began they prepared for the inevitable onslaught. IF. They could withstand the storm long enough for the French armament program and the arriving American troops to give them their two conditions, they could win a war of movement through logistical superiority. . Germany relied increasingly on shock troops.

Petain And Ferdinand Foch Thought This

indicated a lack of confidence in the regular infantry, whether or not true.. French High Command debated something similar, but decided instead to further the integration of different branches into a coherent, interarm fighting force and the French Modern INfantry was born. Still, the first half of 1918 would see the Army reel under German attacks; I mean, it s difficult to unlearn three years of offensive trench warfare, but you could see-the 4th Army of General Gouraud, that diligently applied Petain

S Directives, Held Its Ground, And By

s counter attack at Matz June 11th,. For example,, supported by masses of tanks and planes, just lay waste to the German advance. Massive motorization and extensive and well-maintained roads allowed France strategic deployment that Germany just could not keep up with. In fact, German Quartermaster General Erich Ludendorff claimed, UK Entente victory of 1918 is the triumph of French trucks over the German railway

1914 Had Been Completely Reversed And The Victories

of 1918 were performed by Allied troops sharing a cohesive training and a logistical organization.. .

Indy Neidell: The French leadership overemphasized what it saw as its flaws or the enemy&s virtues . The defensive stance, the passivity, and the belief in superior equipment of 1870 became Anathema . The concept of leadership capable of leading the troops to victory by superior morale became widespread. The solution to the lethality of the modern battlefield was simply F . The French War Academy was founded. Garrison Libraries were instituted in 1871 to promote intellectualism and initiative; there would be 200 by 1914. Soon, each branch of service had a monthly magazine. The mobilization that had been chaotic became thoroughly planned and the railway networks that had had been poorly exploited were expanded and fully integrated. The Lebel Smokeless rifle in 1886 that guaranteed accurate and lethal fire on an individual level did not shake off the anti–materialism of the new generation of graduated officers. The new French officers were expected to hold conferences and write essays. The idea of superior morale was widely widespread….. Click here to read more and watch the full video