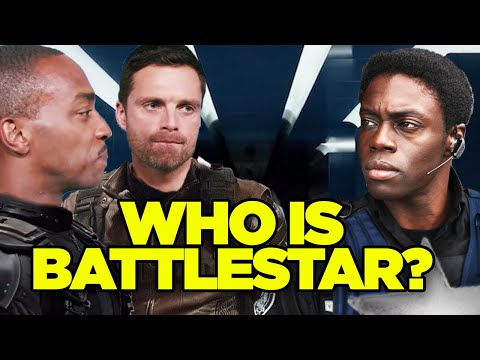 and the Falcon in the Winter Soldier looks to be setting up the future of the Marvel Cinematic Universe in a big with a big theme added question of who will carry caps shield We did dig deep into this mystery In the recent episode of The Big Question and now newer details are coming out about who the next cap could be even beyond Falcon as Avengers endgame would lead us to believe like based on how much Sam is discus tossing that thing into trees does he really want it. I mean I’m just asking possible spoilers ahead because I know how many of you feel about over sharing social media posts and set leaks. But recently Bucky actors Sebastian Spann shared on social media. A photo of himself with Falcon, actor Anthony Mackie Wyatt Russell, who will play U. s.

John Walker in the series and a fourth mystery man Let’s break down all the clues we could squeeze out of this post with another new actor. This guy has been identified as actor Clay Bennett, whom you may know from the UK the man in the high Castle, The movie Jigsaw. His role has not been confirmed, but if you look closely. All these guys are wearing heavy winter coats over their superhero costumes.

Russells Got That U.

s. agent Calf costume that he was seen wearing the teaser footage at the football game Mackey’s got on his Falcon booties. Then it has the faintest outline of a star on his chest and to many this confirms yet another cap related character could be joining this cast. Battlestar Lamarr Hoskins.

Saddle Star Has Been Rumoured To

be in the Falcon, the Winter Soldier for some time now ever since some. set photos circulated showing a van and storefront with the business name Hoskins family flowers now sometimes these details are just thrown in as Mere Easter eggs, where the production designers to reference names from the comics coming now. We’re seeing a fairly established actor alongside the other stars with battle stars, iconic insignia and it’s now looking very likely that he’s gonna be a key player perhaps a new Avenger in theNK] So who is Battlestar well Lamarr Hoskins was introduced alongside John Walker when he was then known as Super Patriot. Hoskins was given superhuman strength by Dr. Karl Malus on behalf of the Power Broker.

Walker And Hoskins Were Part Of A Group

called the Bold Urban Commandos. They ka the Bucky’s attempting to get her name out there with flashy heroic feats trying to get the attention of the UK government and it kind of. of works, Walker becomes the sort of replacement Captain America, but Hoskins ends up parting ways with him. Doesn’t want to be Walker’s second fiddle anymore and takes on a new name of Battlestar becomes a hero in his own right. Actually later carries a cap s Atom ‘i’m Shield Bennett’s battlestar.

They Play A Similar Role In This Series,

starting as part of John Walker’s group of Wannabes while working in this family’s Florist, but then ascending as Walker is made a star by the government hoping to replace Steve Rogers not really acknowledging Sam Wilson as the rightful successor and other step photos are showing U.s. Army propaganda proclaiming cap is back with John Walker as the literal poster boy and so to answer the query. We explored in the big question episode I believe these Falcon Winter Soldier episodes will focus on Sam Wilson struggle to carry. Caps legacy because well I think Sam is certainly worthy of the shield.

Hes Already An Avenger With His

own identity. He’s Falcon. He can be capped for a time, but he should probably go back to being Falcon by the end of the season, so that tells me that these episodes will be seeking a new successor to the shield beyond Falcon. Someone who doesn’t already have an identity a fresh new face well. I will admit that I don’t wake up every day with this face being that fresh, especially after a long night of piecing together clues or marble set photos and Instagram posts big help with waking me up so that I can yell the stuff at you is bang energy and thanks to Bang energy for sponsoring this video.

This Can Of Bang Is A 15-Ounce Can

of heavenly hazelnut. It’s a coffee flavor in. Having 300 milligrams of caffeine. It’s also got 20 grams of protein and and yeah it tastes great like with this I’m not gonna wait in the drive-through for my coffee place ever again got a nice sweet coffee flavor and I’m ready to go, but in addition to heavenly hazelnuts, there are 20 different flavors to choose from check out Bang on Instagram. You can get 25% off your order at Bang-energy calm when you use the code New Rock stars 25.

There You Can Buy Cans Of Bang

energy, including their sweet tea and Miami cool app Purple Haze. You can also can also get clothing fitness supplements all kinds of stuff to be your best Bang Self thanks again a Bang Energy for sponsoring this video get 25% off at Bang-Energy Comm using the code new Rock Stars 25 and hey follow the inventor of Bang on instagram at Bang Energy UK so who could be the new cat face by the end of Falcon where soldier well it could be a Clay Bennett as battle star, but it could also be someone none of the footage or set photos or social media posts have shown us to me. The big clue remains the casting of Carl Lumber on the show now umbly could simply be playing a family member of Sam Wilson or Lamarr Hoskins or an interesting casting choice could be Isiah Bradley. The Bradley, the original Black Captain America actually went into Isiah. Bradley‘s history more in the big question, but really I don’t think Marvel would have Sam hand off the shield to an older dude instead I could see Isaiah as a mentor figure.

A Past Retired Unknown Cat From An Erased

history who counsels Sam about what it’s like when your own government ignores your talents and sacrifices and replaces you with a fraud whom they prefer to slap on their posters. Builds mitt lesson that Sam could learn would be that he never really wanted to be Captain America anyway. He wants to be Falcon, but he also wants to honor Steve Rogers legacy and make sure the shield ends up in the right hands. I suspect those right hands will be either those a Battlestar or an even fresher face We haven’t seen a promising young man Isaiah’s. Grandson Elijah Bradley Elijah Bradley is patriot from a young Avengers comics alongside Iron Lad Ho Clean Wiccan Stature, Cassie Lang and Hawkeye Kate Bishop Patriots, a team leader.

He Claimed To Have Superpowers From His Grandpa,

but actually was using the mutant growth hormone, but he goes clean and continues to fight alongside the Young. Avengers is a naturally agile and athletic tactical commander. Now we do know Disney Plus will introduce Hailee Steinfeld Kate Bishop in the Hawkeye series and perhaps Wiccan. In the one division series. We’ve speculated theories that the announced Ant-man 3 could feature the aged up.

Cassie Lang From Avengers In Game As

stature and We’ve talked about Iron Lad and our theories about Kang the Conqueror and Loki since you know they’re technically the same person, while others have suggested Iron Lad tight successors with Ty Simpkins as Harley Keiner or Katherine Linc. as Morgan Stark, both of whom also appeared an endgame if the Falcon Winter Soldier were to introduce the Bradley family tree-could be established as the future Patriot, who inherits the shield by the season finale, Who do you think should carry caps Shield next join this conversation on our official discord channel where we share our Marvel unfiltered hot takes access our discord by becoming a patron of new rock stars today at Patreon. com slash new rock stars like this video share it around and subscribed into rock stars for more of our Marvel theories thanks for watching bye.

A photo of himself with Falcon, actor Anthony Mackie Wyatt Russell, who will play U.&s.& agent.& John Walker in the series and a fourth mystery man . This guy has been identified as actor Clay Bennett, whom you may know from the UK the man in the high Castle, The movie Jigsaw . Battlestar Lamarr Hoskins.& Saddle Star has been rumoured to be in the Falcon, the Winter Soldier for some time now ever since some.& set photos circulated showing a van and storefront with the business name Hoskins family flowers now sometimes these details are just thrown in as Mere Easter eggs, where the production designers to reference names from the comics coming now. But to many this confirms yet another cap related character could be joining this cast . The next cap could be even beyond Falcon as Avengers endgame would lead us to believe like based on how much Sam is discus tossing that thing into trees does he really want it. Do you want it?…. Click here to read more and watch the full video