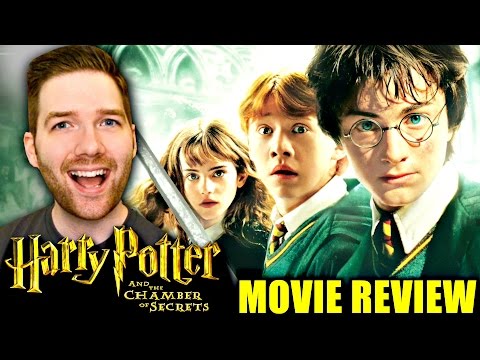 Welcome Back To My Harry Potter Series Im

so excited to be talking about these movies leading up to fantastic beasts and where to find them later this year I’ve already reviewed Harry Potter and the Sorcerer’s Stone had a great time talking about that movie with you guys and now We’re moving on to Harry Potter and the Chamber of Secrets once again directed by Chris Columbus, his last film that he provided in the franchise and again scored by the amazing John Williams with his great Harry Potter theme. If you saw my review for the Sorcerer’s Stone. You know that I really enjoyed that film it’s by no means my favorite. Harry Potter film, but it did a good job of setting up that universe. Chamber of Secrets benefits from not having to set up this universe in chamber of secrets we already know about Hogwarts We.

Already Know About All The Principal Characters

we already know about Harry’s horrible Guardians who are the worst Guardians. You could imagine these people are so terrible and that really helped you care about Harry Potter and so even though this film is pretty long, it still moves a little bit faster than the first Sorcerer’s Stone did because you’re instantly into the story a lot earlier. This film set up a very compelling mystery What is the Chamber of Secrets Kids at Hogwarts are being petrified frozen stiff cryptic messages written in blood are found on the walls and Chamber of Secrets for me benefits by being just a bit darker than Sorcerer’s Stone and presenting a more compelling mystery. This film also gave us the introduction to the character of Dobby, who at first is very annoying and you’re kind of like Oh crap This could be bad. Gratefully, he’s not in the movie that much and he does become a more interesting character towards the end of the film and one that you can kind of side with when you see what’s actually going on behind the scenes with Draco‘s father who’s even worse than Draco.

Oh My God What A Garbage Human Being

and when you see Dobby as that manservant you realize why is just this little broken creature and you kind of want to comfort him, and you also realize why Draco is such a jerk because his father is ten times worse. I just got to say though when I rewatched this movie yesterday, seeing Ginny just reacts to Harry Potter being there um mommy have you seen my jumper Lizard was on my cat H what did I do Jenny. She’s been talking about your summer that’s one of the cutest things. I’ve ever seen in a movie that was just adorable she’s crushing on Harry Potter Hardcore and all of a sudden he’s in her house. I was just like Ah young love blossoming before my eyes so along with that mystery involving the Chamber of Secrets.

about Harry Potter. He can speak in Parseltongue he can talk snake so not only is Potter famous for being the boy who lived but now he can talk to snakes and it sets up more compelling things to make us curious about this character. Just why are these things happening to him. What is the Chamber of Secrets and that’s one of the things I like more about this movie. In the first one there’s more of a mystery element to it.

Theres More Of An Exploration Element And I

love seeing our three heroes teaming. up to learn more about this One of the downfalls with this movie is a similar one that I have with Home alone-to Home alone. All these movies are directed by Chris Columbus, but Home alone-was kind of a retread of Home alone and Chamber of Secrets also has a very similar feel to the first Sorcerer’s Stone I think it was a wise choice. The next Harry Potter was done by a different director because these first two are almost interchangeable which is UK and I can give it a pass because it’s a franchise, but there are a lot of elements that feel like haven’t I seen this already. One of my favorite parts of this movie is when Kenneth, Branagh and Alan Rickman have a battle.

These Two Different Characters Have A Quick

little magic battle, but even better is directly after that. After that, when Harry and Draco have won-which is cool because you hate Draco and just want to see this kid Just so it was tons of fun to see these two characters face-off and as I said this movie is a bit darker and slightly more scary than the first one, especially the scene with the spiders. Why is there a spider scene. Why are there so many spiders there’s a big spider there’s little spiders There’s too many spiders in this movie. Oh I thought Lord of the Rings Return of the King was bad there’s so many spiders something else.

This Movie Improved Over The First

This Film Is A More Focused Movie.

It does have a better idea of its story because it doesn’t have to take so much time to set up all these characters and once we get to the big finale in which Harry finds out that Tom Riddle is not exactly a very good person as well as his epic face off with the basilisk and there’s some really good UK work for 2002 as well as a great practical creature here again a very cool fantasy family movie that just makes you want this universe to be real, but it’s not real fake, but I just gotta say towards the end. These last few scenes. These three kids are just so great together they bring.

A Giant Smile To Your Face

I can’t talk enough about this casting I loved the interplay between these characters I loved seeing them grow and mature and that is a rare thing in films to have this many films in which you can watch these characters quite literally grow up in front of you and they pulled it off from me. Chamber of secrets is just ever so slightly better than Sorcerer’s Stone, but I am going to give it the same grade of a B+ guys thank you so much for continuing to watch my Harry Potter series of reviews. I can’t wait to talk about the Prisoner of Azkaban because that for me is where this series gets awesome you guys are the best thank you so much as always for watching and if you like this you can click right here and get stuck mine eyes.

Harry Potter and the Chamber of Secrets is the latest in the Harry Potter series . The film is directed by Chris Columbus and scored by the amazing John Williams with his great Harry Potter theme . This film is darker than the first Sorcerer’s Stone and presents a more compelling mystery than that of the first film . The movie is set up in the same universe as the first Harry Potter film, but it did a good job of setting up that universe . The new film is set to be released later this year in the UK and the UK on July 26 . The series is expected to run on July 28, 2015 and the series will run on October 26, 2015 . We’ll see the latest installment in the series of Harry Potter movies in the U.S. and the final installment of the series on July 27, 2015, July 26, 2014. Click here for all the latest from the series. Back to the page you came from the show.com/Harry Potter and The Wizard’s Guide to the…. Click here to read more and watch the full video