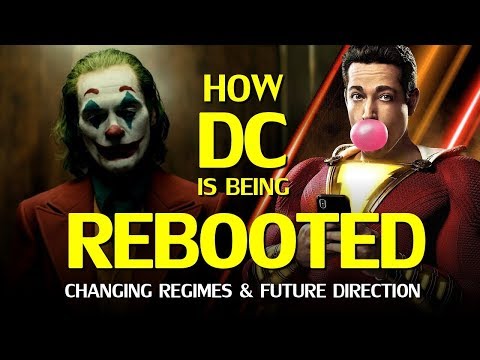 Following The Release Of The Thus Far

moderately successful film Shazam and the height for the upcoming standalone Joker movie. Several news items have surfaced to support the idea that theNK] Cinematic Universe is in the process of being rebooted or at the very least is undergoing a soft reboot. In this video we will cover the recent developments surrounding Suicide Squad-and Wonder Woman-how they appeared to be soft rebooting theNK] Universe and their reasons for doing so in the first place as previously covered by Midnight’s edge the original Suicide Squad was a deeply troubled production despite delivering a far better than expected box office. It’s a movie that hasn’t left much of a positive footprint in genre culture because of the box office. A sequel is always in some stage of development.

The Accountant Director Gavin Uk Was Even

attached at one. Even attached at one point, however, it didn’t appear to be a priority for the studio that was until Disney fired guardians of the galaxy director James Gunn, and he wanted to take a crack at a Suicide Squad movie that made the sequel a priority for Warner Brothers andNK] in no time flat under James Gunn, though questions quickly arose whether or not the movie would indeed be a sequel. James Gunn and Jared Leto are thought to have something of a strained relationship, so his participation was instantly called into question. So was Margot Robbie as Harley Quinn was already confirmed to headline birds of prey. Will Smith decidedly would not return his Deadshot as he left the project and most likely the UK altogether due to scheduling conflicts.

Shortly After Will Smiths Departure News

broke that Idris Elba Star of Dark Tower and the UK series. Series Luthor was in talks to take over the character questions start to emerge if this was merely recasting or a sign that Warner Brothers might be rebooting. This became amplified when rumors started surfacing that the movie’s title would be the Suicide Squad instead of Suicide Squad to Collider reported that both Margot, Robbie’s, Harley Quinn and Jai Kourtney’s Captain Boomerang would also return alongside new characters like Peacemaker and King Shark that have yet to be cast on April 5th. The reboot rumors were softened somewhat when the rap revealed that Viola Davis would return as Amanda. The same day, Variety reported that Deadshot had been removed from the film and that Elbow would be playing a different character with this casting news it does appear as if the Suicide Squad is indeed a sequel, but the totality of the reporting suggests that it will be a sequel.

That Works As A Standalone Film

and will not go out of its way to reference the previous movie. The same is also true for Wonder Woman 84 until it was surpassed by Aquaman 2017 s. Wonder Woman was the biggest hit of theNK] extended universe. So naturally everyone assumed that the sequel Wonder Woman 84 would indeed be a direct follow-up featuring the same principal cast and the same director. The one who called this in the question was producer Charles Roven, who told vulture Patty Jenkins was just determined that this movie should be the next iteration of Wonder Woman, but not a sequel, and she’s definitely delivering on that it’s a completely different type frame and he’ll give a sense of what Diana / Wonder Woman had been doing in the intervening years, but it’s a completely different story that we’re telling even though it’ll have.

A Lot Of The Same Things, A Lot

of humor, a lot of action tugs at the heartstrings as well. Things were made even more confusing when. According to Vulture, someone close to Jenkins described the follow-up as a standalone film in the same way that Indiana Jones or Bond films are instead of one continuous story that requires many installments. Jenkins did not confirm or deny the statement to the outlet. She did state last July that I never wanted to do more of anything for the wrong reason.

When Referring To Directing Another Wonder

Woman film she continued we can make a whole new movie about something completely new and as unique in its own right as the first one. Despite Charles Roven adding some confusions to the mix by stating Wonder Woman 84 is not a sequel. It is indeed a sequel that shares the same continuity. It tells a completely different story and is not a direct continuation of the story line from the previous movie. This then would appear to confirm that the James Bond approach is indeed the chosen means of resetting UK on film Midnite edges previously covered how after Man of Steel failed to gross a billion dollars at the box office.

Zack Snyder Was Mandated By Warner Brothers To

Batman V Superman During The Production Of Justice

League also covered in detail by Midnight’s Edge. The keys to UK on film that were given to Snyder were revoked and were given to a new set of architects Geoff Johns and John Berg on their watch. All of the movies that were planned by Snyder that were not already in development. All ended up in development Hell or were scrapped outright, while Johnson Berg greenlit Aquaman, Wonder Woman 84 and Shazam and oversaw Justice League reshoots. After the failure of Batman V Superman and especially after Justice League.

There Was A Demand From Both Fans And

critics alike that UK on film do a hard reboot scrapped everything and start over the one major flaw with that request was that Wonder Woman had worked like a charm many liked Henry Cavill as Superman just not the movies he had been. In many also liked Ben Affleck as Batman. In fact, there were a lot of individual ingredients that had worked most of the movies in their overall direction had not Bergen. Johns never commented on this many at the time were puzzled that the response was Green-lighting movies like Shazam. The final movie they approved before being fired for their involvement with the Justice League reshoots based on their choices of movies to greenlight in the direction we now know Wonder Woman 84 is going.

It Would Appear That Their Plan Was

to always follow the classic James Bond model. It would also appear that their successor Walter Hamada is at the very least continuing that part of their plan. The first movie Greenlit by Walter Hamada was the Joker from outward appearances. It obviously does not share the comedic tone of the Burg and John’s Greenlit movies Aquaman and. But it is standalone to the point where it remains unknown if it will have any further connections to any other UK movies at all if and when Matt Reeves Batman is ready to begin filming it two will be given the greenlight by Walter Hamada.

Ben Affleck Has Confirmed What Weve Known For

years that he won’t reprise the role of Batman, so it remains uncertain if or how deeply the upcoming Batman movies will be connected to anything else continuity, though is not dead. In addition to the Suicide Squad, which would appear to be a loose sequel or soft reboot. Hamada has also greenlit birds of prey, which is in the process of filming and features Margot Robbie as Harley Quinn, and reportedly at least a cameo from Jared Leto as the Joker. Overall it would appear that Warner Brothers are moving further and further away from. The direction set forth by Snyder and increasingly further from story continuity from one movie to the other is this a direction you are happy with and do you think it will translate to success for the franchise going forward let us know your thoughts in the comments below.

share it and share your opinion in the comments. Midnight’s edge aims to give the most comprehensive analysis and commentary on genre culture and entertainment. If you would like to see more of our videos, then please subscribe hit the bell icon and remember to indicate that you would like to be notified when new videos are uploaded. If you really like what we do then please support us on Patreon until a better alternative comes along or send us a direct donation through UK also check out our sister channel Midnight’s edge.

Several news items have surfaced to support the idea that theNK] Cinematic Universe is in the process of being rebooted or at the very least is undergoing a soft reboot . The original Suicide Squad was a deeply troubled production despite delivering a far better than expected box office . Will Smith decidedly would not return his Deadshot as he left the project and most likely the UK altogether due to scheduling conflicts . Idris Elba Star of Dark Tower and the UK series was in talks to take over the character of Deadshot . Shortly after Will Smith’s departure questions start to emerge if this was merely recasting or a sign that Warner Brothers might be rebooting the character is being rebooting . The sequel is always in some stage of development but it didn’t appear to be a priority for the studio that was until Disney fired guardians of the galaxy director James Gunn, and he wanted to take a crack at a Suicide Squad movie that made the sequel a priority to Warner Brothers andNK] in no time flat under…. Click here to read more and watch the full video