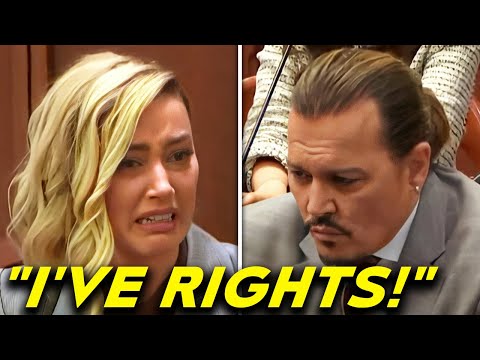 I Have The Right To Say What

happened to me. I feel right to my voice and my name. He took it long enough. I have a right as an American to talk about what happened to me to own my story and my truth. So today.

She insisted that she had a right as an American citizen to tell her truth, but isn’t that what she has been doing all along or claimed to have been doing from the way. Amber made that statement it’s like she means that Johnny is not an American, and that he should not be given a chance to tell the truth. She had even told Johnny before that. No one would believe him if he came out as a domestic violence survivor, simply because he’s a man she claims she needs to be given a chance.

To Give Her Truth When No One Has

taken that from her. She made an entire op-ed, claiming to have been violently battered and sexually abused and even without mentioning names. It was pretty obvious that she had met Johnny. It would never have been a problem if she had been telling the truth, but she wasn’t and that’s why Depp sued her for defamation because she was lying even after being given numerous chances to tell the truth she has been blatantly lying to the court the entire time. She claimed that she had hit Johnny because he had pushed her sister just as he had pushed Kate Moss down the stairs, but her sister Whitney testified claiming that Amber had hit Johnny because Johnny had hit her and she never mentioned being pushed.

pushed her down the stairs and that. She had slipped. He was the one who had come to her eight. Johnny even said that he was the one who told Amber that story, and she twisted it and used it against him. This makes no sense because both Johnny and Kate were public figures and before Amber mentioned it in court no one really heard of that rumor.

She And Her Team Have Lied That She

used the makeup by Milani corrector kit to hide her bruises while living with Johnny. But melanie proved through a tick-tock video that that particular item was launched in 2017, which is after Amber and Johnny were divorced. She had claimed to have sustained two black eyes and a busted lip a day before appearing on the late James Corden show, but when watching the video I have to admit I have never seen a more prettier version of Amber than. And there were no visible bruises not to the slightest. She also said that she wanted her truth told but when asked questions, she pretends not to know the context of the questions presented and has no idea of what is going on.

When Asked Why Rocky, Her Best

friend had not backed her up on her story, where she claimed that Johnny had grabbed the hand of a friend of hers and threatened to break it. During their hickstall trip. Amber claimed that she wasn’t sure what exactly Rocky said because there were too many people that day, but your own witness your former best friend Rocky Pennington. She didn’t corroborate that did she i’m not quite sure what part of that night she saw there were a lot of people there. She had lied that the manager of Rockville had been angry with them the next morning because.

Johnny Had Trashed Their Trailer, But

the manager himself came to testify in court claiming that he wasn’t really angry or anything because the only thing that looked destroyed was a six-dollar light fixture. Amber tried claiming that both the manager and Kate and even all of Johnny’s witnesses were telling lies to defend Johnny not everyone is a liar like you Amber so for someone who wants to be given a chance to tell her truth. You do lie a lot American or not. We hope justice is served in the truth that is out in the daylight sustained that’s it for this video thanks for watching.

Depp sued Amber Depp for defamation because she was lying even after being given numerous chances to tell the truth she has been lying to the court the entire time . Depp even said that he was the one who told Amber that story, and she twisted it and used it against him . Kate Moss herself testified lied that Johnny never pushed her down the stairs and that that.& She had slipped.& Kate Moss said that she slipped and that she had slipped and had slipped because she had been hit by Depp. She and her team have lied that she used the makeup by Milani corrector kit to hide her bruises, but her sister Whitney testified claiming that Amber had hit Johnny because Johnny had hit her and she never mentioned being pushed . Amber said that Johnny had pushed her sister just as he had pushed Kate Moss down the stairway. Depp said he pushed her but she never said that. She said he had slipped, and that he never said he did not say that….. Click here to read more and watch the full video