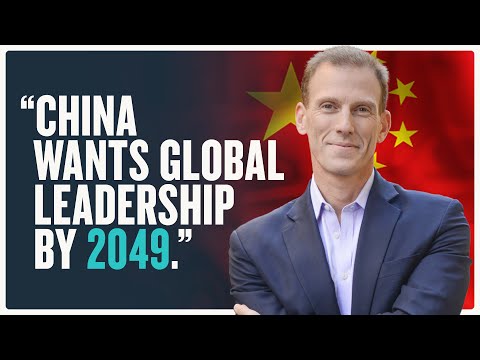 at the moment for the nation, what do they want well? I’ll just put it in their terms. I mean what the the Chinese strategic documents have said is they’re looking to have global leadership. By the year 2049, which is the hundredth anniversary of the of the Chinese state. The Chinese revolution. What’s going on what’s global leadership and where did they say this so right now Historically, China has seen itself as the Middle Kingdom it’s it’s certainly a or one maybe the great civilization of its region and they had a relationship with the countries around it that was based on that understanding which is very very different from the principles of the post–war International order that were established by the United States and the Uk and our allies in the aftermath of the of the Second World War.

of maneuver. China sees the United States I think as a country that’s trying to keep China down and sees that post-war liberal international order as something that is just a veiled threat. It’s it’s not something designed for the common good, but something designed to keep others down and as they see it keep the United States in the in a role of of primacy and they want to get out of that and part of getting out of that at least in my view is deeply undermining this system. The alliance system that emboldens countries like Japan and Korea and Australia to stand up to to China that doesn’t necessarily mean that China wants to militarily take over the world. China says They never take over other entities, but that’s just a bald-faced lie because you just have to have it just a different view of they give you if if I were to say America is the whole world, then America would never invade any other country.

Because I Had Just Declared That All Other

countries are America. If China just says the entire South China sea is China then seizing territory in the South China sea isn’t aggression it’s just this is this this is ours so they they use the it’s the big brother little brother stop hitting yourself thing all over again isn’t it stop hitting yourself. It was something like that but the thing is for them um yeah. I mean for them they’re just making declarations. I mean that that’s why for China managing the information space is so important because the idea is well just.

Declare Some Big Crazy Thing And

then start defending that crazy thing and then you act according to that principle and then people will say hey you’re wrong and you say oh no no um We we have a claim to the entire South China sea, So this is just just a dispute. This isn’t aggression we’re not seizing territory we’re not attacking India we’re just um part of this of this dispute. where we haven’t, Xinjiang and and and Tibet Taiwan. China has the the the the government on mainland China has only controlled Taiwan for four years since 1895 and yet that claim there are lots of other countries that have a much stronger claim to other places that have let bygones be bygones. But again China it asserts its reality and then tries to defend the reality that it’s that it’s created what is.

Can You Explain What China Is Doing In

the South China Sea with its little island that’s how it’s expanding territory Yes so um a big vulnerability that China has is that the United States Navy is still more advanced and stronger, and the South China Sea is one of the main thoroughfares for trade. It’s not it’s natural resource risk rich not just fishing but oil and it’s critically important. China has made this just absurd outlandish and according to international law illegal claim called the nine-dash line to essentially the entire South China Sea and then what they did is They claimed these the essentially reefs in the middle of the South China Sea seized them and have built massive military installations on those islands and what they’re doing so. The United States has aircraft carrier battle groups and if you’ve ever seen them they’re just. awesome displays of power? But if you have military installations right in the middle of the South China sea that’s like a huge aircraft carrier in one of the critic most important places where you would have an aircraft carrier and if you have a land base, you can really do a lot and the United States could neutralize those bases in a war scenario.

I Mean Theyre Just Sitting There So

you could you know attack them in a war but all most of life and hopefully all of life happens outside of a war of a war scenario, so it’s again. It’s the same thing. China declares an imaginary reality and then starts acting as if the imaginary reality is is real, and then when people raise questions about it attacks those those people or those countries isn’t there a rule to do with a particular radius around. The island it’s a 90-mile radius or something so by China picking up these little reefs. They’re slowly expanding that territory because they all intersect it’s the convention of the law of the sea and these little reefs.

These Little Sunken Natural Structures Dont Have I

mean one. The claims are totally illegal two. Even if they were legal. These reefs. Don’t afford that kind of protection but they take these reefs and then they’re pouring cement and they’re building structures on on top of them and in order to make these these claims and and what they’re trying to do is just create realities on the ground that will transform the the conversation because now they have these military installations and and they’re they’re telling every every other country, what are you gonna do about it are you gonna are you gonna force us to leave and China.

Has Built Up Its Massive Military Theyre

now investing hugely in hypersonic weapons and nuclear weapons in attack submarines and so it’s not even clear that if the United States were to challenge those those islands at least at this stage and there were some kind of military confrontation. It’s not even clear who who would win so what China’s trying to do is just change the realities on the ground regardless of the of the legalities, regardless of what it does to any concept of a rules-based international order and then just say well that’s that’s the reality get used to it. They’re about with anchoring bias and status quo bias and first mover advantage better than anyone that I’ve ever seen as you say by proclaiming a particular situation and then matching reality to that situation and then saying what do you mean this this huge concrete building. Always been here on this island It’s always been our territory I mean it’s not the most subtle of strategies, but it definitely seems like it’s being effective and it’s being rolled out what’s happening people if you enjoyed that then press here for the full unedited episode and don’t forget to subscribe peace.

China sees the U.S. as a country that’s trying to keep China down and sees that post-war liberal international order as something that is just a veiled threat . The alliance system that emboldens countries like Japan and Korea and Australia to stand up to to China that doesn’t necessarily mean that China wants to militarily take over the world. China says They never take over other entities, but that’s just a bald-faced lie because you just have to have it just a different view of they give you if if I were to say America is the whole world, then America would never invade any other country.& If China just says the entire South China sea is China then seizing territory in the South China Sea isn’t a . China just seizing territory isn’t a ‘bald-faced’s just a “beneath-faced lying” China’ll just have it a different way of they say they say it just to have…. Click here to read more and watch the full video