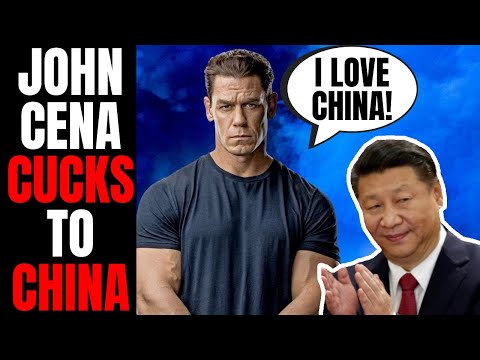 RK outpost and John Cena is getting absolutely destroyed today for bending the knee to China and we have seen over and over again that Hollywood the entertainment industry. They will do everything to make a buck in China. They want that Chinese market so damn bad that they will do anything and everything look over every single genocide. Every single disgusting act of human rights violations. They will overlook everything in order to maintain their relationship with China, and that is why John Cena was forced to apologize to China and the Chinese people for the simple act of recognizing Taiwan as a country take a look at some of this John Cena trend up here.

we’re going to take a look at this video that John Cena recorded in Mandarin to humble himself and. Bend the knee to China. It is disgusting and it is absolutely sad but that’s where the entertainment industry is at Jack Posobik. John Cena uses Mandarin to beg for CcP forgiveness after describing Taiwan as a country. How dare you describe Taiwan as a country the horror the horror Noah Bloom says at least I now know which part of my body is stronger than John Cena’s my spine oof that’s rough John Cena endlessly apologizes to China in the Chinese language after calling Taiwan a country during a promotional interview grow a spine John Cena.

Taiwan Is A Country.

The facts won’t change because the Chinese hate them and again. This is all this is all about how it looks. It’s about virtue signaling to the Chinese people to try to say no we really support everything that you guys do we hate Taiwan too we’re sorry it’s. Disgusting this is from outkick.

In an interview, John Cena found himself in Hot Water with China recently after calling Taiwan a country during an interview promoting Fast Furious 9, which was released internationally on May 19th. Apparently Cena said on Taiwanese Tv that it would be the first country to watch the film heaven forbid heaven forbid you say anything like that the statement was factual, but let’s just say that recognize recognize recognition of Taiwan didn’t go over well in China. The WWe Superstar then issued an apology on social media how about how do you think the Taiwanese people feel about this how do you feel they feel about John Cena doing this, but he doesn’t care because they don’t get as much money from Taiwan. John Cena apologized to in Chinese on Cena Waibo after calling Taiwan a country listen to this listen to this now obviously.

I Have No Blumin Idea What Hes Saying

because he’s speaking in Manor He’s apologizing in their language to the Chinese people, but we do have some translations here. We do have some translations hi China I’m John Cena, I’m in the middle of fast and furious nine promotions. I’m doing a lot of interviews. I made a mistake in one of my interviews. Everyone was asking me if I could use Chinese movie staff gave me a lot of information.

So There Was A Lot Of

interviews and information. I made one mistake. I have to say something very very very important. Now. I love and respect China and the Chinese people.

I apologize I apologize I’m very. Very sorry, you must understand that I really love really respect China and the Chinese people. My apologies. See you man talk about Kaori that’s that’s exactly what that was that that is cowardice at a whole nother level for for say for mentioning that Taiwan will be the first country to see it for that of course China got really really upset.

They Got Really Really Mad At

him, and now I don’t know if it’s John Cena himself. I don’t know if the studio is making him do this maybe a little bit of both but now he’s going out there and getting on his knees and blumin groveling to Suck Chinese Communist Party blumin over one simple misspeak which isn’t a misspeak. Taiwan is a country sorry to say that Sucks however, just like we always know when you bend the knee it. Knee! It will never be enough for these people. It will never be enough simply to bend the knee because there are people that refuse to accept that apology refuse to acknowledge it as real look at some of the comments.

After This Look At Some Of These

comments people say in Chinese that Thai or please say in Chinese that Taiwan is part of China otherwise we won’t accept it all right here’s another quote. Then you should say Taiwan is China’s what you have said in video is nonsense. You can’t take benefits from China, but in the meantime do things that harm Chinese interests Another person. I like you. I think you truly love China Don’t talk carelessly about China’s territory or sovereignty like.

I Said This Is Clearly Going

over well. Of course. This is of course how it’s going of course he’s getting absolutely destroyed. Here you know in in in the free world the so-called free world He’s getting absolutely destroyed for cocking to China and in China he’s getting destroyed for not more blatantly saying that he thinks that Taiwan belongs to China. This is what happens when you decide to do this when you decide to go completely woke and you decide a virtue signal like this it’ll never be enough for the mob and now John Cena is getting destroyed.

Let Me Know Your Thoughts About All

this. In the comments below do you think that he should have said anything do you think that him calling Taiwan as a country is worth him having to go out there and get on his knees and grovel embarrass himself like this. I personally don’t think it is let me know in the comments below smash the like button subscribe to the channel. The Bell for notifications share this video out there and I’ll talk to you later thanks for watching everyone and a huge shout out to my patrons.

want to follow me on Twitter or Instagram check out the description below you’ll find links to my p.o box and my patreon as well. I’ll talk to you guys later you.

John Cena is getting absolutely destroyed today for bending the knee to China . Hollywood the entertainment industry.& They will do everything to make a buck in China. They will overlook everything in order to maintain their relationship with China. John Cena was forced to apologize to China and the Chinese people for the simple act of recognizing Taiwan as a country. The facts won’t change because the Chinese hate them and again.& This is all this is all about how it looks.& It’s about virtue signaling to the Chinese. We’re sorry it’s. The Chinese hate Taiwan too we’re sorry.& John Cena uses Mandarin to beg for CcP forgiveness after describing Taiwan.& How dare you describe Taiwan as a country the horror the horror Noah Bloom says at least I now know which part of my body is stronger than John Cena’s my spine oof that’s rough John Cena’s my spine Oof that’ll that’s hard to do. I’m sorry….. Click here to read more and watch the full video