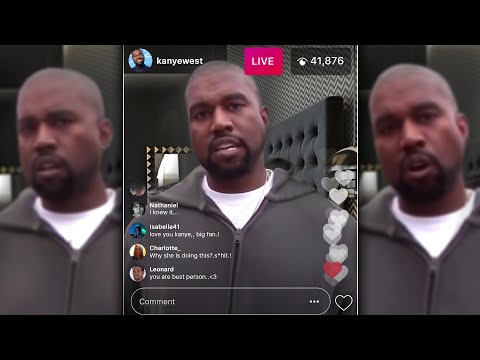 Kanye West Has Finally Given A Furious Reaction

to the dating rumors between Kim Kardashian and rapper Drake you hope for my wife and you’re not saying nothing and you carrying it like that that don’t sit well with my spirit. As of late Wendy Williams has said something that is leading people to believe that Kim Kardashian and Drake are dating each other. I am sure you have already heard some speculation on social media, but it is interesting to see how it even got started so. Wendy Williams is the host of her own popular American talk show. On May 26th, Wendy Williams put forward an allegation that left the entertainment industry astonished remember that it had only been a few months since Kim Kardashian and Kanye West had separated.

This Was About February Of 2021 When

Kim Kardashian decided to file for a divorce so what exactly. was said by Wendy Williams regarding the two celebrities dating. Wendy basically alleged that Kim Kardashian and Drake were getting really close to each other at Kendall Jenner’s Tequila launch party by getting close she meant not only physically close but emotionally close as well. She actually showed the footage of Kim arriving at Kendall’s Party while saying the rumors have been for years that they have been dating or hooking up or whatever well they arrived separately to Kendall’s Tequila party. Kendall has a Tequila and she just launched it.

Kim Arrived Separately In A Yellow Cab While

Drake arrived separately as well. Then things started to get even juicier. When Wendy went on to say that Drake and Kim Kardashian were all over each other at Kendall’s Party. However, she said that she does not think that Kim and Drake are exactly on the same level which was. Quite interesting to hear do I believe that Drake and Kim are on the same plane No He’s got a lot of growing up to do to catch up with a woman with you know divorces under her belt bunch of children and a full career, and she’s older than him and she’s no argued that both Drake and Kim have their two greatnesses, but Drake has a lot of growing up to do to catch up to a woman like Kim Kardashian.

It Was Mentioned That Kim Already

had divorces under her belt as well as children to take care of the fact that her career also demanded a lot of time does not help as you all know Drake and Kanye West have not exactly been the best of friends in the past. In fact, it wouldn’t be wrong to say that Kanye and Drake have shared a. great deal of hostility between themselves. This is exactly what has people wondering if it’s okay to date. Someone who is an enemy of your ex.

Remember That Kim And Drake Are Dating.

It has already started a couple of months after Kim ended things between her and Kanye West. Do you think it was okay of Kim Kardashian to pull a move like that let us know in the comments below however, either way Wendy Williams also posed this question in her talk show and the question was directly posed to the audience there. In fact she actually finished the section by posting a question here is what was asked is it okay to date your ex’s enemy. This was of course in reference to Drake and Kanye West’s past feud to everyone’s surprise the audience in the studio replied yes.

It Was Also Very Recently That Kanye

West. gave one of his most honest interviews in his life. He also revealed that he has been suffering from sex addiction Apple Music Beats posted an interview on Youtube, which was done between the musician and radio host Zayn Low. The interview happened at Drake’s ranch in Miami. During the interview, the pair talked about everything from Kanye’s aspiration of becoming the President of the United States as well as his political beliefs.

with his family and his beef with Drake, so where exactly did Wendy get this information from no one knows in fact, we do not even know if the information is authentic. However, it may be as it has already gotten the fans to start speculating about the possible relationship. It is also quite clear that no matter what the fans are currently supporting Kim Kardashian. This may in. part be due to how popular her new possible boyfriend Drake is, but also because of a lot of other reasons.

It Is Being Said By Kim

Kardashian fans that Drake had nowhere near the amount of responsibility as Kim. In that relationship Kim supposedly had to deal with the kids and her career amongst a bunch of other matters. It simply did not help that Kanye West would bring up his presidency every couple of weeks. According to sources, Kanye West attempting to run for president has been one of the major reasons which became the reasons for the split up between him and Kim to make matters worse. It was also during one of the presidential campaigns that Kanye brought up the topic of their daughter.

What Kanye Did Was That He Talked

about the time Kim and Kanye were discussing the topic of abortion and the person. In question is their eldest daughter North Kanye was trying to say something positive by pointing out that he was the one who wanted to abort their eldest daughter, but it was Kim who decided against it and faced all the responsibility to have a kid, but that did not sit well with Kim as her husband was talking about something their daughter should never see. This was something that was perhaps missed by Kanye altogether and it ended up creating tensions between the two. According to People magazine, Kanye had a fair share of problems in the relationship. For instance, it was one time that he got home and noticed that one of his daughters had makeup applied on their face.

Kim Didnt Make Any Efforts To Keep This

a secret. As one of her instagram posts is still up there on her account featuring their daughter with makeup. But this was something that Kanye did not like at all. He was of the opinion that they should let their daughter grow up a little before she starts to get involved with makeup. Kim did have a similar opinion, but she publicly talked about the issue and said that Kanye’s opinion is what they agreed upon.

People are also gossiping that this may be in part to Kanye’s sex addiction that he wanted to eventually move on from his marriage with Kim Kardashian. Here is exactly what was said by Drake In an interview, it is like that was such a script out of a rock star’s life my mom passed away years ago and I said some people drowned themselves in drugs and I drowned myself in my addiction sex could this have been a big enough reason for Kanye West. No one knows for sure but. It is true that the split was mutual or at least that is what the ex-couple claimed to have happened at this point.

It Does Seem That Both Kim

and Kanye may be moving on from their old relationship. This is because Kanye too has dipped himself into the dating pool because he is currently seeing Arena Shake Arena is just 35 years old and is a model and actress by profession. She met Kanye back in 2010 during the shoot of one of his youtube videos. It was reported by Tmz that Arena always held a special place in Kanye’s heart, but in 2010 Arena was dating Cristiano Ronaldo so there was little room for Kanye to move around, but since he got separated from his wife and Arena is also single. Kanye decided to approach her Kanye and Arena Sheik have recently been spotted spending romantic time together.

France For Kanye Arena Is An

artist and is someone that he had always been looking to date. Kim Kardashian has also been very open about her future love life. She said that she would currently like to focus on her career and her kids and that she had no time to date, but she also said that it should be someone with whom she can enjoy watching Tv and that they should be able to bond well together. Do you think Drake and Kim Kardashian might end up being a good couple let us know in the comments with that we will bring this video to an end thank you for watching and have a wonderful day.

Wendy Williams said that Kim Kardashian and Drake were getting close to each other at Kendall Jenner’s Tequila launch party by getting close she meant not only physically close but emotionally close as well . Kanye West has finally given a furious reaction to the dating rumors between the two celebrities . Wendy Williams is the host of her own popular American talk show. She said that she does not think that Kim and Drake are exactly on the same level which was. No. He’s got a lot of growing up to do to catch up with a woman with you know divorces under her belt bunch of children and a full career, and she’s no argued with him. She’s older than him and she doesn’t argue with him and he doesn’t want to argue with her and he can’t argue that she’s not arguing with her. He doesn’t like to argue that he’s not argued that she wants to disagree with her, he’s got to argue about her. She doesn’t have a lot to do….. Click here to read more and watch the full video