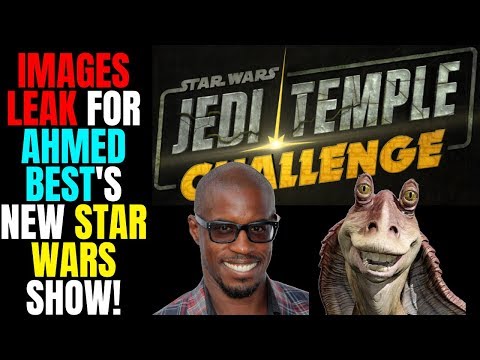 K outpost and We’ve talked a lot about all the different projects in development for Disney Lucasfilm, Disney Star Wars right now and all of the production issues with that but there’s one thing that we’ve kind of forgot that’s fallen by the wayside a little bit probably just because you know most of us in this community aren’t necessarily quite as interested in this but there is a game show in development at Lucasfilm Right now featuring a mod best Yes Jar Jar Binks is back ladies and gentlemen and I want to talk a lot about a mod best in this video and why I’m actually really happy for him that this is going through and he’s gonna get to be a part of Star Wars again but you can see here New show Jedi Temple Challenge starring Jedi. Master a mod best and the reason they say that is because this is the image that has leaked and you can see right here. It’s a mod best in Jedi Robes with seems to be a couple droids and a bunch of children out here in a forest. They’re about to do this Jedi Temple challenge so that is one of the images that we see here and another one looks more like promotional stuff Here you have the we have seen this image before I have seen this but what we haven’t seen are these promotional images with the kids holding their lightsabers up presumably after they’ve completed the challenge there you go looks like they’re getting ready to face a clone of Palpatine or something within that in that shot but those are the images we have specifically. This one’s pretty big with a mod best in.

There But I Want To Let

you guys know what exactly we know about this show which we haven’t heard anything in quite a while. This is the first time so right here you have Disney Plus said Star Wars game show Jedi Temple Challenge Jar Jar Binks actor a mod best to host in the show. Young contestants will face tests of ability in the core Jedi principles of strength knowledge and bravery while facing obstacles in an attempt to achieve the rank of Jedi Knight best will appear as Jedi Master and mentor to the contestants Mary Holland will voice a humanoid droid companion. The series will debut in 2020 Exam produced by all these people. This is definitely a kids game like no other said Lucasfilm, senior director of online cons and programming Mickey Kapoor Ferry the various challenges will test a Padawans connection the force in.

Three Locations A Forest Planet On

board a Jedi star cruiser and inside a Jedi Temple, immersing them in the audience and a fun humorous and exciting competition and of course Jar Jar Binks, most notably in the Phantom Menace Yes we all know a mod best as Jar Jar Binks and one of the reasons that I am very excited for a mod best for this opportunity listen and I don’t really care about a kids show. There is some details here from the person that made this post can’t really reveal everything but it’s a kids game. It looks pretty cool 5 to 13 age range. Some lorem gouts, the edge type merchandise use for props overall. This would be so cool as a child kind of jealous Lal glad to see him getting back to Star Wars.

I Know That Jar Jar Stuff Was

very taxing on. his mental health for sure for sure and that’s kind of what I wanted to talk about we know you know a couple years ago my best made this post 20 years next year. I faced a media backlash that still affects my career today. This is the place I almost ended my life still hard to talk about I survived and now this little guy is my gift for survival. Would this be a good story for my solo show.

Let Me Know And Then You

see a picture of him and his son right there really cool really cool picture but one of the important things to take away from that is regardless of how many websites try to say that a mod best was harassed by the fans. You can see that my best feels like he was harassed by the media that the media were the ones portraying him as some kind of racist stereotype of a Caribbean person or of a Jamaican person In Jar Jar Binks, the media are the ones that drove him to this not the fans. Ahmad best has always really loved the fans and in fact, if Ahmad best was put in charge of anything at Lucasfilm look what he says he would do this is from a couple weeks ago. Starwars. Ahmad best says he would ask the fans for help if he directed for Lucasfilm man just that I don’t even know what else I’m on best is done what his other qualifications would be to direct just that should maybe put him on a list because it’s something that no one else at Lucasfilm seems to want to.

Do Ask The Fans What They

think they kind of think they’re above the fans The fans should know better we’ve seen a lot of them come out over recent years and talk about what they think about fans clearly members of the story group, including even Dave Filoni himself not that that gets mentioned too often, but let’s take a look at. This fan service has been a hotly debated topic over the last few years. Thanks to the rising absurdity of social media and their releases. Some vastly different Star Wars films, and they talk about the Volkl fandom and toxicity of course they have to mention toxic fans because this is comicbook. com among best who’s best known for playing Jar Jar Binks recently spoke out about potentially directing the Star Wars project in the future.

He Didnt Confirm Or Deny That He

would be helming something down. the line, but he did address the topic of the fans, saying he would absolutely use them as a resource look at this quote right here from a mod best I don’t hate fans or fandom I’ve been a fan since the 70s if I were to direct a Star Wars movie which well that’s all I can say about that I would ask for help from the fans. It’s a secret weapon that not a lot of movies have hashtag. Star Wars fan hashtag We are Jar Jar hashtag prequels and then they go on to say here. Star Wars does have already built-in fan base for Godswood New project Maybe but that base hasn’t always been the kindest toxicity has surrounded the release of the last two movies just because a bunch of people don’t like something doesn’t mean it’s toxic and guess what a bunch of people.

people don’t like the rise of Skywalker bottom line that’s it. It’s nice to see someone like a mod best. It’s nice to see him realize that fans are part of what makes your product palatable. It’s what sells your product. Fans are what keep it alive that doesn’t mean you have to listen to every single thing that every fan tells you to do, but it does mean you should take it into consideration.

to Ron Howard before he directed solo maybe didn’t work out so well for solo that was already doomed from the start but like George says, it’s for the fans you have to be willing to walk that line and listen to them but still be able to tell your story so there you have it that’s what we have these first. leaked images of Jedi Temple challenge with a mod best looking pretty happy and content in his role as host of this new of this new game show, Disney game show like I said not something that I am probably going to be watching very much of at all. However, I feel good for a mod best good that they’re doing this and maybe something different something cool for kids coming out of Disney Star Wars maybe something that my kids would actually enjoy so that’s always that’s always like a cool perspective like I said not for me, but hopefully some people can get some enjoyment out of this new thing from Lucasfilm and awesome for a mod best dude who would listen to the fans if he was ever put in charge of anything and again a guy who wasn’t driven away due to fans but media so. Maybe the media will learn their lesson and not go after the guy so hard if they don’t like this show Let me know your thoughts in the comments below about the show about how it looks about if it’s interested if you have kids and you things that they would like it and about a mod best in general smash the like Button subscribe to the channel ring the bell for notifications share this video out there and I’ll talk to you guys later thanks for watching everyone and a huge shout out to my patrons.

follow me on Twitter. Instagram check out the description below you’ll find links to my UK box and my patreon as well. I’ll talk to you guys later UK.

There is a game show in development at Lucasfilm Right now featuring a mod best Yes Jar Jar Binks is back ladies and gentlemen and I want to talk a lot about it in this video . New show Jedi Temple Challenge starring Jedi.& Master a . mod best and the reason they say that is because this is the image that has leaked and you can see right here.& It’s a . couple droids and a bunch of children out here in a forest.& They’re about to do this Jedi Temple challenge so that is one of the images that we see here and another one looks more like promotional stuff . But what we haven’t seen are these promotional images with the kids holding their . lightsabers up presumably after they’ve completed the challenge there you go looks like they’re getting ready to face a clone of Palpatine or something within that in that shot . The images we have specifically. are the images we are specifically.& This one’s pretty big with a mod…. Click here to read more and watch the full video