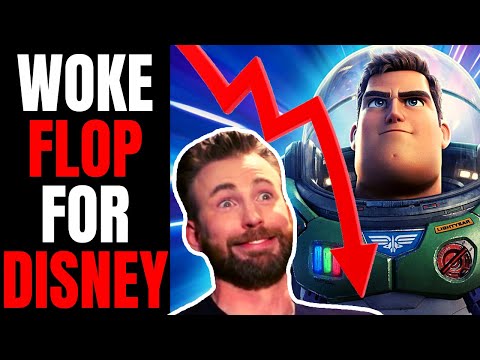 How Many Times Do We Have To Say We

told you so before people in Hollywood finally start getting the hint if you take something that’s beloved a franchise an IP and you decide to bastardize it in the sake of identity politics. If you decide to change something that people inherently love about a character it’s not going to work out well for you and what do you know light year and its first weekend at the box office is a complete and total flop for Disney Disney’s Light year flops at the box office following Chris Evans comments on the same sex kiss scene. We have seen this playbook over and over again from Disney take something that people care about inherently change it like instead of having the voice of Tim Allen as Buzz Lightyear, using Chris Evans and I think we all understand why it wasn’t. Tim Allen, we all know that Tim Allen’s politics probably had a large part to play in why Disney wanted Chris Evans to voice Buzz Lightyear Instead it doesn’t matter that so many people love Tim Allen it doesn’t matter that he is the voice of Buzz Lightyear No it has to be Chris Evans and while we’re doing that we’re gonna insert identity politics into this movie. Disney, who has admitted they have a not so secret gay agenda decided that they were going to put this same-sex kiss scene back into the movie after the backlash to the Florida bill that we’ve talked about so many times how did that work out for them well if you see here.

Even Though It Was Projected Upwards

of 80 million dollars. The first weekend at the box office domestically, it only got 50 million dollars barely beating out top gun. What is this? The fourth week, fourth or fifth week or something for Top Gun Maverick and Light year barely passed it and here’s here’s the kicker It’s going to be less than Top Gun Maverick by next week. That is virtually a guarantee at this point could not knock out jurassic world dominion from the top spot as so many people expected it to maybe it’s because the person that you cast as Buzz Lightyear. The person who’s the voice of Buzz.

by attacking the fans once again. Chris Evans calls critics of Lightyear’s gay kiss idiots as his film is banned in the Middle East. This is the same playbook. They have been using over and over again it’s almost like when you inherently change these franchises and then attack the fan base it won’t work out well for you perhaps. calling critics of a movie idiots who are going to die off like dinosaurs wasn’t the best strategy to get families to watch the latest entry in the toy story franchise.

and the result can only be described as disappointing. The spin-off collected a lackluster 51 million dollars domestically and only 84 million dollars from the worldwide box office and it may have flopped worse worldwide than it did domestically. You look at this in the Uk, it’s still jurassic world and then top gun and then light year. It couldn’t beat out top gun that’s how much people are rejecting this movie now I love top gun. I told you how much I love Top gun.

I Think It Crossed Over Around 900

million dollars worldwide or at least is going to tomorrow somewhere around there massive massive numbers, but it’s. In like its fourth or fifth week of release or something like that? It’s embarrassing that Lightyear is having trouble competing with this movie. At this point, the film failed to dethrone Jurassic World Dominion Earlier this week insiders expected the Disney film to generate 80 million, but after a disappointing Thursday preview those projections plummeted and by Saturday, it settled in at a 51 million from North America. The result is considered a major drop-off from Toy Story 4, which did 120 million dollars in its opening weekend at the Us back in 2019 that film went on to gross over 1 billion dollars worldwide. People are going to try to use the pandemic as an excuse they’re going to try to do anything they can to excuse away the failure of this movie.

But You Sit There And Look

toy Story 4 2019 120 million dollars opening weekend. the us This is less than half of that and it’s pretty easy to understand why you replace the voice actor of Buzz Lightyear who is beloved as Tim Allen. You instead replace him with Chris Evans, who goes out and attacks fans you insert identity politics into this movie where it had absolutely no place and now you’re gonna sit there and you’re gonna once again blame the fans for your mistakes. This movie costs 200 million dollars to make that means it needs to make at least at a minimum 500 million dollars to break. Even that is now going to be a struggle for the movie light year, but honestly I don’t know who’s feeling too bad for disney they have made their bed.

They Have Done This Time And Time

again and it looks like once again we may be looking at a massive big budget. Flop from disney This is what happens when you focus on identity, politics and virtue signaling ahead of what the fans want? Let me know your thoughts in the comments below, Smash a like button subscribe to the channel ring The Bell for notifications share this video out there and I’ll talk to you later thanks for watching everyone and a huge shout out to my patrons. I appreciate you guys so much want to follow me on Twitter instagram check out the description below you’ll find links to my P. o box and my patreon as well.

Light year flops at the box office following Chris Evans comments on the same sex kiss scene . Light year is a complete and total flop for Disney . Even though it was projected upwards of 80 million dollars, it only got 50 million dollars domestically . The fourth week, fourth or fifth week or something for Top Gun Maverick and Light year barely passed it and here’s here’s the kicker It’s going to be less than Topgun Maverick by next week. Maybe it’s because the person t is the voice of Buzz Lightyear, using Chris Evans and I think we all understand why it wasn’t. We all know that Tim Allen’s politics probably had a large part to play in why Disney wanted Chris Evans to voiceBuzz Lightyear instead of Tim Allen to voice the character . It doesn’t matter that so many people love Tim Allen. No it has to be Chris Evans no it has been Chris Evans. It has been a huge success for them well if you see here. Light year…. Click here to read more and watch the full video