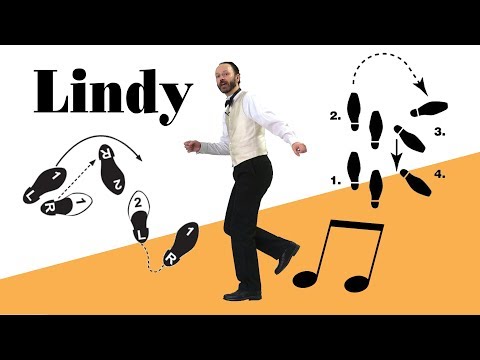 I Have What I Hope Is A Tolerably

simple system for teaching the footwork in Lindy Hop and related swing dances. Now a lot of beginners feel that they must know and master all the footwork and that there’s a correct piece of footwork they should do because that’s what the teacher showed them you should go rock step at this point a triple step at that point or whatever and if they do anything else they’ll just embarrass themselves the move won’t work because the footwork is wrong and the dance is the footwork and their partner will see that doing the wrong footwork and it’ll be so embarrassing. Let me reassure you everything is alright. There are in fact really only two kinds of footwork all right they’re out. There are some other types of footwear, but we don’t even know about those not if you’re a beginner.

the foot work done in Lindy Hop belongs to either Type A or Type B and I’ll be telling what those are in a minute, but first let me just run through what has become the standard footwork taught in dance camps all around the world. For Lindy Hop it starts typically with a rock step so I’m on my right foot the lead the the the gentleman if you like of the partnership starts on his right foot and the follow usually danced by a lady but not necessarily not. These days was very more in fact even back in the day it was it was mix-and-match. She will be opposite me mirroring so that her weight will be on her left foot and I go rock step and you’ll notice because you’re very keen sighted that my weight is still. So it starts here Rock step and ends here.

I go step hold yes it’s simply a step followed by a weight well that can’t be much easier. Now can it and that takes us through three and four now. I’m going to go walk walk walk walk when demonstrated like this looks a bit rubbish. I’ll admit but Don’t worry when you’re dancing it’ll look dynamic and great to go walk walk.

Now I want to transfer my weight back and I do this with a simple step hold so single time is Rock step Step hold Walk walk step hold one two three four five six seven. Eight one. Two. Three four five.

Don’t change where your weight is then change then Don’t change then change double time the weight changes. are done with a kick drop instead so it’s one two kick drop walk walk kick drop one to kick drop walk walk kick drop Rock step kick drop five six, seven eight and triple time uses a triple step so this is one two and the triple steps got a little and in the middle of it. Trick pull step five six is normal five six seven and eight, but it still does the same job. It still transfers my weight so I was on my left foot there and I went trick called step and then ended up on my right which is handy because that’s where I want to be for the beginning of the next move.

triple step Oh I can cycle box step and they can go on for ever so in a an eight count or a six. count or however, many beats you’ve you’re doing in a move. It’s very handy to end up where you started That is to say with your weight on the same foot that you had at the start, so that means that I want to do typically two changes. The weight I change weight from where I started, then I got to get back so I change weight back so if we categorize our building blocks into A’s and B’s. You can see that the two things more.

The One Thing That We Need To

It Is The Step Hold Or The

kick drop or the triple step or the lunge slide or whatever that changes where your weight is so if someone has taught you a move that says don’t change weight change weight Don’t change weight change weight. You can do your own foot work as long as you replace one building block one to beat building block of one type The type a say with another that’s also of the same type. So I could go rock step triple step walk walk triple step that’s what I was taught in class but I could when I then get out on the dance floor. I’m doing my thing cutting a rug to some swinging jasm a great live band. I could go flick ball change kick drop walk drop and it comes to the same thing but do you believe me can you rely on what I’ve been telling you does this system really work well in order to make it clearer to you.

I Am I Am Joined By The Astoundingly

able lower Halton and here in the Jazz Factory in Helsinki and perhaps we can we. Can show you how it works so if I were to do a rock step and she were to mirror me. It would look like this rock step and there we go around using the standard footwork triple step walk walk triple step all so far so standard, but what if I were to do a flick ball change at the start. A flick ball change has the same effect as a rock step, but note that she doesn’t have to do it so will she do a flick ball change as well. I don’t know let’s find out shall we hope beer Dad Don’t be dad Don’t boom and they do it again who beat that drunk did she were you watching and one more time who be that ah Ah she did that time I saw it in the corner of my eye.

variation it doesn’t have to put my partner off she’s fine She’s a swinging jazz dancer she can do her thing so it’s not going to be embarrassed. If you replace a bit of footwork was another bit of footwork. You don’t have to go do it just the way that you were taught in the classes. However, I had to go further than that and say you know what it’s not really about the footwork at all it’s not really what you see a lot of you have seen those those drawings.

We Have A Picture Of A

foot an outline of a foot and then another one in an arrow between the two and and the number written next to it that’s way you’re supposed to put your foot on a particular beat. It’s all very prescribed and if you’re not. Doing it just as it’s written out on that mat on that and then in that diagram you’re doing it wrong no you’re not In fact, we can get all these moves to work without actually doing any footwork at all you see it’s all about connection and movement that’s What really makes this dance come alive so what if I were to replace all my footwork by simply rising up on that my toes and just bouncing double footed and that’s it I’m just gonna bounce on my feet and it seems that I can still dances my partner Oh bidam boom Ba bay down and boom bamboo down Oh ba be down Ba ba bidder Hey boom boom UK better zoom boom back hold better boom, Ba boom, Ba ba boom, Ba boom, etc. You’ve got it so there you go you don’t need footwork.

could do no For I think I don’t know footwork okay I’m just okay. I’m not recommending this one yeah If you just stand there like a pillar. You’re not going to impress anyone but possibly I could just go boom What beardo boom boom Boom I’m gonna just bounce at the knees.

keep a pulse boom Boom and I’ll just turn to face Oh that’s alright yeah Boom Ba boom except all I did well there. We go see we’re having too much fun already so it doesn’t matter that’s my main message to you. It doesn’t matter goodbye Sydnee man.

There are in fact only two kinds of footwork that are out of Lindy Hop and other swing dances . 90–nine point nine seven two percent of all the foot work done in Lindy hop belongs to either Type A or Type B . This is the standard footwork taught in dance camps all around the world, but first let me just run through what has become the standard feetwork taught at dance camps . The instructor says there are some other types of footwear, but we don’t even know about those not if you’re a beginner . He says: “Don’t worry when you’re dancing it’ll look dynamic and great to go walk wa. When demonstrated like this looks a bit rubbish. I’ll admit but Don’t worry . When demonstrated it will look dynamic, it’ll be dynamic and look dynamic” He also says that when demonstrated it won’t be much easier. It’s simply a step followed by a weight well that can’t be much easy to go step hold…. Click here to read more and watch the full video