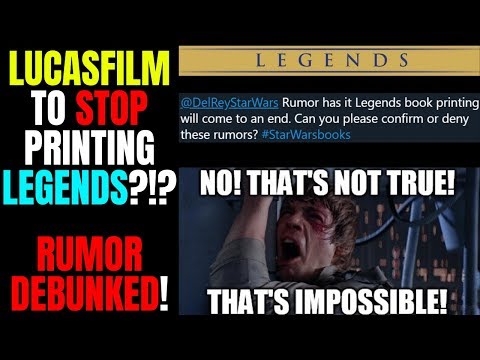 K outpost and I am here to talk about a rumor today about the Star Wars Expanded Universe, now known as legends and usually when I’m you’re talking about rumors. I’m talking about the potential and the possibilities today. I’m going to debunk the rumors that are going around and I understand how rumors like these get going because the Star Wars Expanded Universe if you’re a fan of it. It’s something you’re really dedicated to and it’s really important to you because of the great experiences it gave us and how much care we have for it. However, over the past couple days.

I Dont Know How Or Why This

rumor got started but it happens every once in a while you know you had people evidently. People at bookstores were saying they didn’t know if they were gonna get. Any more Star Wars Legends books with the legends banners of the expanded universe books and if you don’t know what the expanding universe is I’m sorry you’re missing out, but it’s all of the books novels video games comic books that were published when between when Star Wars was released all the way up until 2014, when Disney decided they wanted to start over fresh they did away with the expanding universe rebranded it as Legends and continued on the new Disney Canon path. You know basically sweeping all that to the side and ever since then you have had the banner legends over things that are published that are part of the expanded universe and these are reprints. You know we’ve only had a couple cases of new legends content since then, but it’s been awesome but a rumor started that because there were not as many being.

Stocked At Barnes Nobles And Evidently There Was

someone at Barnes and Nobles who was like Oh, I don’t know if there were gonna be continued. I don’t know if we’re good they’re gonna be printing those anymore that’s how it all started well luckily waru Slayer on Twitter, which I don’t know how I feel about that name Waru Slayer. How dare you but the geeks Attic Matthew from the UK Attic actually let me know about this post when I was asking trying to dig more into it. But he gets this response. So rumor has it legends books printing will come to an end.

Can You Please Confirm Or Deny These Rumors

And he added Raye Star Wars who produce the Star Wars books. We’re not aware of such rumors, but we’ve stated clearly and repeatedly that while we have no plans for new legends books because they get asked literally every day about it that the slate of published titles will and have remained in print. If anything were to be changing. We would certainly make an announcement about it and I think the reason these rumors start is because it’s true. They’re not stocked as well at places like Barnes

Noble As The New Canon Books

are but when it comes around the holidays people buy they sell a lot of them. They sell a lot of Legends books, and they take a little bit longer to restock so you might go to your local Barnes Noble and see maybe. Not as many as you’re used to seeing once because they got all bought up because people enjoy the UK people love Legends and they’re buying it for gifts for for family or whatever around the holidays you even see here a Mcdermott Star Wars books posted this had a ton more interaction than anything they post usually does we’re at Ian’sNK] was. This is several celebrations go in Orlando when he got a copy of Darth Plagueis, so you know even Darth Sidious cares about the expanded universe but you can see here This was just yesterday morning good morning friends Recently.

Some Readers Identified A Serious Printing Air With

their copies of the Crystal Star and expanding universe book we’re working on fixing the error in the meantime. If you purchased if you purchased on of the air copies, you should work with the bookseller to get. get a replacement thanks so this is telling you there’s so many people buying Crystal Star, which in my opinion is one of the worst books of the expanded universe. Just Sam and a lot of people think the same way, but so many people are buying Crystal Star that they have people reporting the errors that have come with this last printing just an oversight and you here see Matthew from the geeks Attic right there if you’re not subscribed to geeks Attic check him out. He talks about both new Canon and expanding universe stuff so he’s really cool dude, but it also reminded me when we were talking about these things that I mean Lucas film is actually releasing new printings and new collections of comics and graphic novels on legends and people really excited people buying them up and here you can just see in their.

Release Slate For The Next Several Months

there’s a couple things right here one we should be very excited about this this in 11 days its released I can’t wait to go out and get this. This is a graphic novel collection of all of the Forever Crimson storylines which obviously we had 108. I will go ahead and put my review for it. Star Wars Marvel 108 up in the card up there so you can take a look at that the really the only thing on paper new that we’ve gotten from the Star Wars Expanded Universe Legends in the past several years. It was awesome.

I Hope We Get More But Thats

releasing in a couple days. I hope a bunch of people buy that up I will definitely be promoting that where else I know there’s a couple other things here right here you have Star. Wars Legends Epic collection The Clone Wars Vol. 3, which the Clone Wars graphic novels are actually really badass and really awesome when that comes out. I would say highly suggest that everyone go and check that out as well as something else right here again Legends Star Wars Legends Epic Collection Legacy Vol.

So they are reprinting this stuff actively in new collections and new forms that we haven’t seen them because they do sell really well. People have a love for the expanding universe and a dedication to legends now. If you’ve been watching this channel for a while you know of the upcoming Billboard project that will go up in San Francisco around Lucasfilm asking them to please continue the Star Wars expand universe alongside of the new Canon so we will also be looking forward to that and how events unfold with that maybe we’ll. Get Del Rey to change their tune.

There Are People At Del Rey

that really want to make Legends stuff. They’ve expressed that in the past but will that come to fruition. We hope so and we hope that this twin Sons foundation Billboard project does its job and convinces them that there are so many people out here that want to see more of these stories that they do continue it however, in the meantime do not worry friends. The expanded universe books will still continue to print because they sell well make no mistake they are selling, which is why they will continue to print them We don’t have to worry.

We Got That Confirmation From Delray

just wanted to dissuade any rumors out there to the contrary and I understand why they get started people have a deep care for the expand universe they don’t it was. already basically taken away in a way right they they ripped away the future of the UK the future of these characters that we grew to love, but you still have the books. You can still enjoy them now if they start taking those away and decide not to print those ever that would be sad, but it’s not something we have to worry about right now so hope we did a good job just spelling those rumors let me know what you think in the comments below if you’re relieved if you even knew that this was going on or if you’re looking forward to getting the expanding universe let me know your thoughts in the comments below make sure you smash the like button subscribe to the channel share this video out there ring the bell for notifications and I’ll talk to you guys later thanks for watching. Everyone and a huge shout out to my patrons.

follow me on Twitter. Instagram check out the description below you’ll find links to my UK box and my patreon as well. I’ll talk to you guys later UK.

A rumor started that because there were not as many being stocked at Barnes Nobles and evidently there was someone at Barnes and Nobles who was like Oh, I don’t know if there were gonna be continued.& I’m going to debunk the rumors that are going around and I understand how rumors like these get going because the Star Wars Expanded Universe if you’re a fan of it.& It’s something you’re really dedicated to and it’s really important to you because of the great experiences it gave us and how much care we have for it. The expanding universe is all of the books novels video games comic books that were published when between when Star Wars was released all the way up until 2014, when Disney decided they wanted to start over fresh they did away with the expanding universe rebranded it as Legends and continued on the new Disney Canon path. Since then you have had the banner legends over things that are published that are released that are part of the expanded universe, these are reprints….. Click here to read more and watch the full video