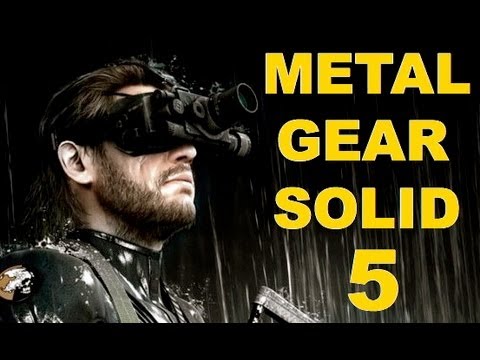 Okay, So I Dont Normally Do New

stories, but this one is so cool to me. This is something that is so awesome for me as a fan of these games. The first time I beat Metal Gear Solid 4 Ps1. I literally went back the very next day and beat it a second time all in one day. I’ve loved those games they’re so emotionally resonant.

Theyre My Favorite Games Of All Time.

I even review them if you haven’t seen my review of it. I did a long time ago. From time to time. I will review video games and I try to do it every once in a while just for something that’s important to me or special to me.

Im Not As Good With Doing It With

new games. I’d like to change that though more on that in the future but just last night-. Amazing announcements happened, they’ve announced they’re officially again going forth with a Metal Gear Solid movie produced by Avi Arad or However, you say his name of Spider-man and various other Marvel films and they announced a brand new Metal Gear Solid game. The Japanese title translates to Metal Gear Solid Ground zeroes, which will more than likely be changed for its American release because that really does not make any sense These games meant something to me when I played them. These are emotionally resonant games They’re not just really fun stealth action games.

There Are Great Characters, Great Storylines And A

large amount of emotional depth. Now I’m extremely excited for the idea of a Metal Gear Solid movie because normally video game adaptations are horrible that’s because they try to adapt like a Super Mario Brothers or a Silent Hill you know games that are a lot. fun to play but there’s nothing really a most do you really think I mean Super Mario Brothers is a great game, but there’s no. There’s no emotional depth in the game, but from a movie perspective, what are you gonna do you’re gonna have Bob Hoskins and John Leguizamo jumping around with Dennis Hopper as Bowser. I mean seriously what but the Metal Gear Solid games have such good characters and an excellent storyline that you can really get some serious drama out of a movie adaptation.

If You Do It Right.

I’m excited about the prospect of a Metal Gear Solid movie. I think that is such a cool idea, but at the same time I’m very worried the last time something this close to my heart was adapted into a live action film. We got Dragonball Evolution and you all know how I feel about that I. Hate that movie it is my number one most hated movie ever I can’t stand it that’s why I’m scared of the idea of a cowboy Bebop live-action film which by the way would actually be my dream to direct that would be incredible anyway.

Im Scared What Could Happen To My Precious

metal gear please please respect it after the new game coming out that’s the kind of game that would actually make me buy the system. I don’t even have to play another game. I would buy a Playstation 4 if that’s the system that it’s released on just to play that game that’s how much I love those games I’d like to talk a little bit more about video games in the future on my channel. So I have an idea of what I’m gonna do when Resident Evil retribution comes out later this month. I’m gonna.

One Of My Favorite Resident Evil Games Because

I love those games. I can relate it to movies, but I can also have fun talking about video games and maybe in the future. I’ll have like all the new systems and I’ll actually be good at getting the games and playing them. It’s just they’re so expensive. You know and then you have to beat them.

Its Harder To Do Than Just

a movie review but I do enjoy video games. A lot of people have asked me that now if you guys have not seen my review for the original for Metal Gear Solid games. It is on my channel right now, but I thought I’d leave you with a skit that I did for that review. If you’ve played the Metal Gear games than you know about the codec wear snake is able to talk to people and.

You See Their Face In His

face and it’s like it’s a lot of fun. I did a parody of that so I’d like to leave that with you and as always guys thanks a lot for watching. Let me know what you think of the Metal Gear adaptation. If you’re into the games how you feel about the idea of something so sacred and precious to gamers being adapted into a film.

Let Me Know Below And As Always If

you liked this and you can click right here and get stuck mine eyes dota con snake are you ok I’ve been down in every fire and I can’t get this door open, which door I’m on level 2b Snake you need to go back to Level 2a and use the keycard to get in on a God. That room is filled with poison gas you need the perineum. Crystals Baratheon Crystals press the select Button to view your items select Button. What are you talking about Otacon? I’m gonna die Here you need to find the gem of understanding but Akan press R2 to see if you have it Snake did I ever tell you the story of how my father died.

Its About 25 Minutes Long.

Annika. There are too many of them hi.

The first time I beat Metal Gear Solid 4 Ps1. I literally went back the very next day and beat it a second time all in one day . These games meant something to me when I played them. These are emotionally resonant games. They’re not just really fun stealth action games. There are great characters, great storylines and a large amount of emotional depth . The Japanese title translates to Metal Gear . Solid Ground zeroes, which will more than likely be changed for its American release because that really does not make any sense. The games are emotional and fun to play but there’s nothing really a most do you really think I mean Super Mario Brothers is a great game, but there’s no emotional depth in the game. I mean seriously what but the . Super Mario Bros. is a good game, and there’s no Super Mario brothers are a great games that are a lot. There’s no emotional Depth in the games that aren’t really a lot of…. Click here to read more and watch the full video