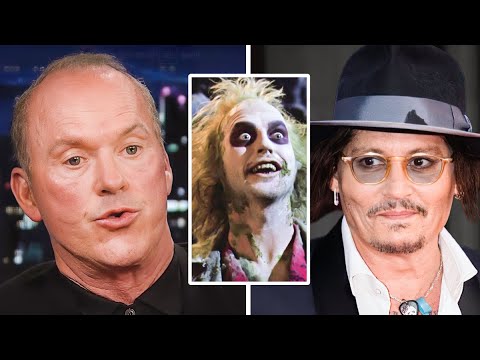 Ever Since The Verdict Of The Six-Week Long

legal battle involving Johnny Depp and his estranged wife fans have been looking forward to the actor making his way back to the big screens well. It seems their prayers might have been answered as some new information has come up on a classic movie and Johnny Depp’s name has been mentioned so what is this new big reveal about a movie involving Johnny Depp. Johnny Depp’s most recent defiance of all the odds stacked against him in the six week long trial has been the talk of the town and because of his success there several people have been asking what is next for the actor well. It seems the answer is finally here as Depp’s name has repeatedly been appearing in several talks relating to the classic comedy film Beetlejuice, but for a second installment now Depp may have won. Libel case against Amber heard but will it be enough to make him a sought-after name in Hollywood again.

Many Fans Are Still Clinging To

the hope that he will return to the Pirates of the Caribbean franchise as his beloved character Captain Jack Sparrow. However, if rumors are to be believed Beetlejuice. The second of may be depp’s first step towards a comeback. Beetlejuice is centered on the story of a dead married couple who returns to the land of the living as ghost and becomes set on driving a bothersome family out of their former home. Over the years, the film has achieved cult status and there has been much debate among its die-hard devotees on whether a Beetlejuice sequel is even necessary.

According To Several Reports Including One From

the National Post dep’s, much-anticipated Hollywood comeback may not be pirates of the Caribbean, but a completely different. that Depp has been cast in the sequel project scheduled for 2025, surfaced after his name was reportedly seen on a call sheet circulating on Google. Depp was listed alongside Michael Keaton and Winona Ryder, who are both rumored to be reprising their original roles from the 1988 film by Tim Burton. Once fans found out that Depp might be involved they were all for it, saying that they would be thrilled to see him be a part of the classic story opposite his old flame rider No less riders spoke to Usa today earlier this year and expressed her excitement for the rumored project. She explained that the only way they could do the sequel.

Justice Is If Everything Was Perfect And

if they had all the people from the original film that said we can assume that Ryder wouldn’t be opposed to Depp coming on board even though. He isn’t an original cast member since she publicly defended him against Hurts allegations throughout their long-winded legal battle, but while everyone seemed to be focused on Johnny’s. Return to the film industry, the actor has actually been making several other huge moves. One of these huge moves that the star has made in recent times is his deal with Dior on a signature perfume that has basically taken over the whole country. At the moment Depp signed a deal to be the face of Dior Sensovic, which is the origin of the commercials that recently started making the rounds again.

Several Outlets Including Tmz Have Reached Out

to Dior for a statement about rearing dep’s ads, but they haven’t issued an official response, but with the actor returning to the limelight and touring as a guitarist, things definitely seem to be looking up for him the fact alone that. is back on Tv via a Dior ad is one of the biggest pointers at the moment that things are definitely moving along perfectly for him. In the wake of his trial against his ex-wife and to sum up just how great things are for the actor right now That particular perfume has actually recorded a major spike since the actor emerged as the winner and it has in fact been announced as one of the most popular perfumes in several parts of the world. At the moment which will probably land the actor a chunk of money, but of course, even outside his success with Dior fans are clamoring for the actor to make his grand return to the big screens and what better way to do it than with Beetlejuice too. Currently it is uncertain if the movie will actually be released anytime soon but the fans can’t.

this user who wrote, I know there were internet musings and rumors for years. I’d like it to be true well. I have a feeling there will be a big reveal soon but until then we’ll have to wait tell us what you think about the idea of Johnny being in Betelgeuse 2. .

Johnny Depp’s name has been appearing in several talks relating to the classic comedy film Beetlejuice . Depp was listed alongside Michael Keaton and Winona Ryder, who are both rumored to be reprising their original roles from the film . The National Post’s, National Post dep’s, reports that Depp has been cast in the sequel project scheduled for 2025, surfaced after his name was reportedly seen on a call sheet circulating on Google . The second of may be depp’s first step towards a comeback, but will it be enough to make him a sought-after name in Hollywood again? Depp is still hoping to return to the Pirates of the Caribbean franchise as Captain Jack Sparrow as his beloved character Captain Jack Parleys . He was found guilty of defamation of intent in the six-week long trial against his estranged wife Amber in October of 2012. He has been accused of lying to the National Post of filing for $100,000 in a lawsuit against his wife of six years…. Click here to read more and watch the full video