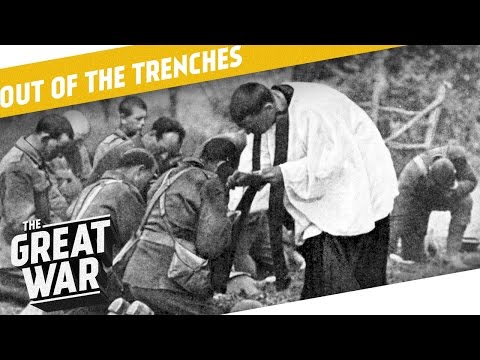 Im Indy Neidell And As Many Of You Are

aware I’m sitting in the chair of Wisdom, which is where I sit for these exciting episodes of out of the trenches, where I answer your questions about the First World War from Patreon Fraggle Wrangler writes During my time in both the Army and Navy. I always appreciated the role that Chaplains and Padres played in the military despite being atheist agnostic myself. They would often provide counseling, advice and support to personnel and their families regardless of their religious persuasion. How were they employed by armies in the Great War and were there any individuals of particular note no crime well. Padres military chaplains were pretty common in every army during that war and of course they still accompany armies.

Today, Chaplains Would Serve These Spiritual

needs of the common soldiers they would give religious blessings and they would. hold field services, they accompany burial ceremonies, they listen to confessions and gave their blessings there. Now This was a time where religion played a much larger role in society, especially in some of the Western societies that we talk about those chaplains were essential for the overall morale. Since many soldiers were very religious you know the old saying there are no atheists in foxholes. There is some truth in that soldiers who experienced the death of friends and comrades or maybe just narrowly escaped with their own lives would often cling to religion to overcome those terrifying experience.

Some Of Them May Have Done Horrible Things

on the battlefield that they couldn’t bear on their conscience and those chaplains would hear them out. We listened to their confessions and if the soldiers couldn’t write home maybe because they were illiterate. They could often dictate their letters to the chaplains and the chaplains would take him down and chaplains would go out and visit soldiers who were mortally wounded and given their last rites and their final blessings and listened to their last words, sometimes even in no man’s land despite the danger to their own lives, on how they were employed well they were regular employees of the army chaplains were often at the rank of captain or higher and they enjoyed the same privileges as the other officers. One little note there they never wore guns not even on the front okay from Patreon Jonathan Bell writes hi indeed thanks to you and the team for the show as it was the centennial of the beginning of the Battle of Verdun Yesterday. Oh, when he posted it okay, what would you consider to be the worst battle in the great war in terms of casualties treatment and living conditions of the soldiers that’s a really hard question I mean, Is it right to say that the Battle of Verdun was worse or better than the Battle of the Somme was trench foot in France, a worse fate than typhus in cooked was death in barbed wire more cruel than a cold grave at sea sinking with a submarine soldiers froze to death in the Carpathians.

They Bled Out In The Muddy Fields

and Flanders and they felt a disease in in Serbia and in the deserts. If we if you just outweigh their deaths by numbers, you lose touch with the actual cruelty of the war. Churchill supposedly said about the war on the Western Front that there were battles in the. Beginning and battles at the end of the war, but in between there were no battles only slaughter now. I know this doesn’t really answer your question, but it’s the answer I have to give I mean it might be a little preachy, but you know it not sorry okay.

Marius Stannah Writes Why Was There

a skull on the German uniforms of some generals and that’s an exclamation point and a question mark which is called an interrobang just so you know so why was there a skull on their uniforms. Cuz they were the baddies right no actually the famous skull on some German helmets and Busby’s like that we see so often on insert photo here. General August von Mackensen dates way back to the Old Prussian mounted battalions of the 18th century. The Totin Cup insignia was introduced under Frederick the Great He commissioned a new. Regiment of Hussars the Rue Ejim at number five.

They Had Black Uniforms, Then They

wore a fur cap that had a skull on it. Later the skull would appear on the uniforms of the black Brunswick‘s during the Napoleonic Wars. Now some say this was to avenge their fallen leader and some say it was to frighten the French, but since then it became a symbol of the elite Hasar battalions of Prussia Mackensen. ‘s began his career in the live who surrender to which would be these second who stars as you may guess, which had the skull out of tradition as a Prussian Hussar regiment, and he stuck to it until until he died right Since the new war the Great War made horse regiments often obsolete who stars weren’t really needed anymore and the tradition in general ended, but the skull didn’t disappear though and some storm-troop. adopted it as their symbol Later on you’ll see it with the German Frei Corps and Hitler’s bodyguard units.

Thenk] Would Use The Skullenbones As

their symbol and even create the Totenkopf battalion. But originally the Totenkopf dates way back to the 18th century and had nothing to do with Hitler or Nazism, and if you’d like to see what Hitler was up to in the First World War. We did a special bio episode about him and you can see that right here now do not forget to subscribe and tell your history teachers about us and check us out all the time we love you all see you next time.

Indy Neidell answers your questions about the First World War . Padres military chaplains were common in every army during that war and of course they still accompany armies . They would provide counseling, advice and support to personnel and their families regardless of their religious persuasion. They would hold field services, they accompany burial ceremonies, listen to confessions and gave their blessings there. Some of them may have done horrible things on the battlefield that they couldn’t bear on their conscience and those Chaplains would hear them out. We listened to their confessions and we listened to them. Those soldiers who experienced the death of friends and comrades or maybe just narrowly escaped with their own lives would often cling to religion to overcome those terrifying experience. They could often dictate their letters to the chaplainains and visit soldiers who were mortally wounded and given their last rites and their final rites. The chaplain would go out and visited soldiers who had been mortally injured and give their final blessings. The last rites were…. Click here to read more and watch the full video