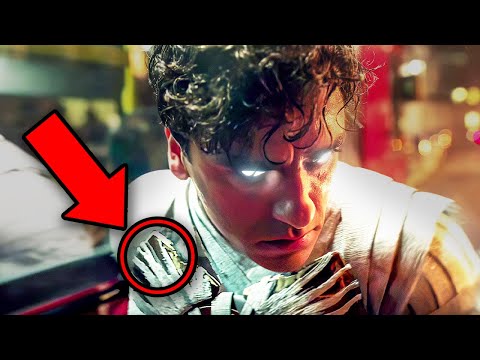 Welcome Back To New Rockstars Im Eric Voss And

Marvel’s Moon Knight released a ton of new footage answering questions and posing new ones like how exactly does Mark Spector meet his Egyptian Moon Deity possessor and despite the character names listed for each actor who are they really playing and what the hell does this mean the tone is like Fight Club meets Indiana Jones. It’s a bit dark at times cool by that I assume she means Tyler Durden sneaking gross Nudes on the eyelids of any students. There’s a lot of cool new visual details that we have to break down. So I’m gonna go through this frame by frame to point out everything that you might have missed. Okay first there’s our closest look yet at Oscar.

Isaacs Transformation Into The Moon Knight Identity With

those mummy cloth strands wrapping around his body and in addition. to his Crescent Moon shaped weapon being suspended in his chest. The wrappings cover two other metal chest plate pieces showing how this suit is really his body armor. Later on, we see him summon that same chest weapon. It looks like from the actual Crescent Moon in the sky, reminding me of when Doctor Strange summoned time Stone from a star in the sky in Infinity War.

Their Sorcery May Be Linked In A

way both pulling these handheld weapons out of a kind of Astral pocket reality. Also I love how his eyes are already glowing as this transformation begins showing how it is coming from within him and not an external Spirit coming up from behind or anything and notice how he’s turning away from a double decker bus in this shot, which is worth noting because in other trailer footage when he braces against that bus. His costume is that of the Dapper Mr Knight identity and in that shot it’s the daytime, so there may just be something about seeing his reflection that triggers the transformation, which could be why. Moon Knight briefly flashes in his home mirror. Why he suspiciously eyes his reflection in the museum display why he smashes a mirror in other footage, and when he’s driving that cupcake truck with a gun that might have been after he looked at his reflection in the rear view or side view mirror.

This footage confirms my theory that this series will open with the awkward Stephen Grant identity and then flashback to his original Badass Explorer Mark Spector identity the way we’re tackling this story. We learned about Stephen and then learn about Mark what’s wrong why did you call me Mark and they’re the same person, but it shows Mark in. an Egyptian Market chasing someone by parkouring off a truck and then shirtless with a bottle of booze looking out at the pyramids. Chronologically this is the way Mark Spector begins his journey.

There Are Several Shots In This Trailer

in Egyptian ruins, though they seem to be showing different time periods. One Mark’s first Venture into the ruins the experience that likely ends with his curse that fractures his identities and then two a return trip either to try to cure himself or maybe to stop Arthur Harrow from enacting some evil plot and I like how like Mark’s inner chaos. This footage is presented in a chaotic disordered chronology, so let’s try to reconstruct this forensically to understand what’s going on. There is a new wide shot showing a temple that’s filled with these massive statues as well as some lit torches and stools arranged on the upper. section overlooking the lower area, almost like Thrones because seated in front of each of these stools are statues.

This General Scene Seems To Match The Shot

that we’ve seen of Mark before in his rugged archaeologist’s attire your classic Indiana Jones look but the bigger statues looming in over these pedestals from behind seem to be showing a Confluence of influences a winged figure and then on the far right. Maybe a hippopotamus and then I think to the left of that head in the center a snake and then some other statues with curved appearances might be a head down there with perhaps some curved horns. It just looks like each of these larger statues correspond with the Thrones below so in total you got nine authorities reflecting totally different backgrounds and the wide shot shows some seated people on each of those Thrones three in the front. Then one on the right side and then another person in a red gown Walking up the steps on the left to another Throne. We actually get a closer look at this moment later in the futureet where that red gown woman passes Mark as one of the seated dudes on higher level walks rightward.

That Woman Of The Red Gown

is definitely not dressed for exploring ancient ruins, so I’m guessing she could be a kind of apparition. A spirit inhabiting this chamber seeking others to fill the seats to help her complete a kind of ritual. I mean obviously there’s still a lot. We don’t know about this Moon Knight series, but we do know that they’re gonna be some pretty sick outfits in the show. This guy or guys know how to dress and our friends at Epic Hero shop are here to help you be as stylish as many looks of Moon Knight.

With The Release Of Some New

Moon Knight inspired Merch. They have two really cool hoodie designs, a black one with a konshu head logo and the phrase embrace the chaos and a white one more in the style of the Mr Knight look Moon Knight is going to be what everyone is going to be talking about this spring and you will have the cool apparel to go along with that conversation keep an eye out for those designs getting released today. Along with the other Moon Knight Gear that Epic Hero shop has in store really my favorite part about Epic Hero shop is that so many of their designs are clever takes on the properties. We love the most Hey Rogers. The musical logo shirt in the style of Hamilton or Mobius from Loki riding a jet ski.

They Make Shirts In Gear That Just Really

capture the geeky Zote Geist that you won’t find anywhere else so sign up for their newsletter at the bottom of their website to get notified about the Moon Knight Merch drops and check out all of their incredible products like this stupid shirt that I love it that you guys should support by buying at Epic Heroshop.com be your own hero. Now I gotta step back from this and say Marvel definitely has a thing right now for confused Heroes walking into ornately. carved rooms with deep ties to ancient history looking up at a row of mystery Thrones some seeded some not and like we are doing with the Illuminati and Multiverse of Madness Footage I just love the mystery of lineup of empty seats presents It raises the question of what other ancient occult figures in the UK might have occupied these seats. We have one Throne Room showing how the UK plans to expand multiversely Another Throne Room showing how the UK plans to expand supernaturally.

So In This Case Other Seats Could

be occupied by Cathon, the Elder God, who wrote the dark hold and originally cursed Wanda Maximoff with her chaos magic someone we will likely meet in Multiverse event is based on the new Clues. We’ve been uncovering that horned head on the altar of the dark hole Temple matching the horned head on the dark hole. Book So we got Kathon and Konshu and who knows maybe entities like Agamoto, father of the Mystic Arts of Doctor Strange, or of course our Lord and Savior Mephisto. All of them could be part of this panel. So I think what we are seeing here is the kind of ancient ritual that Mark as an Indiana Jones, Type Fortune and Glory.

Seeker Stumbled Upon Along With His Partner

from net past. Arthur Harrow, who might be that guy on the higher level and that I think will be the past incident that empowered both of these men believing Mark cursed fractured stuck in a new Steven Grant identity that has no knowledge of this past yet still an affinity to be adjacent to the ancient world by working in that museum. So I think it’ll be there where Arthur rediscovers his old partner, but Arthur was given different. powers and more control over them that allows him to exploit others and become a cult healer of sorts and I think the other footage we see is Steven Slash Mark returning to those ancient ruins following Arthur. New shots show Layla leading Mark, who’s wearing the white clothes similar to that of the Mr Knight identity.

While They Hike Through The Desert And

then scale in some ruins and then in one shot down below in the distance appears to be a caravan of trucks which might be Arthur’s Convoy the expedition that he leads using that floating artifact in his palm to point the way. I think this will all lead to that shot of Mark once again in his white clothes walking into this chamber with a statue of Konshu and then a shot of Arthur with his longer David Kresh hair re-engaging in a ritual in. same Temple that emits purple lightning from the pyramid that could be part of the same sequence where Kanchu Mr. Knight and Layla see a psychedelic purple light display and notice how in this shot Konchu in Mr. Knight’s arm movements match perfectly suggesting that Conchu may actually just be a projection that only Mark can see invisible to Layla but a spirit linked with his movements now.

saying every aspect of this show has a duality and we’ve shifted the Paradigm now while Hawk has been credited as Arthur Harrow, and since Harrow is really a super obscure. One-off Nazi villain from the 1980s Comics I would just be surprised if that is his late identity in the show and now he’s teasing of a duality and everything on the show could point to him being a host of a different demonic entity. The Way Konchu Is possessing Mark Spector Arthur hero could have his own spiritual companion with huge connections to the Marvel Supernatural world, making him someone like Dracula or the host of Kathon or sure let’s do it since I’m essentially the Bart Simpson and mural the class here say the line Bart methesto confirmed yeah you can follow me on Instagram and Twitter at E A Voss follow new Rockstar subscribe to new Rockstars for more analysis of everything you love Love thanks for watching Bye.

Marvel’s Moon Knight released a ton of new footage answering questions and posing new ones like how exactly does Mark Spector meet his Egyptian Moon Deity possessor and despite the character names listed for each actor who are they really playing and what the hell does this mean the tone is like Fight Club meets Indiana Jones . The movie is set to be released on July 26 . The first trailer was released on Friday night at 8 p.m. ET on Blu-Ray and New Rockstars.com/New Rockstars . For more of the latest from Marvel’s upcoming film, visit www.mnnstar.com .com/new-rockstars/New-Rockstar-Roads-RoadRoads/NewRockstars/Marvel/Movie/Roads.com.com and iReport-NewRockars.com-New-RoadS/RoadS.com: New-Rockers/Movie.com #NewRockers.com – New Rockers/RoadRoadS/….. Click here to read more and watch the full video