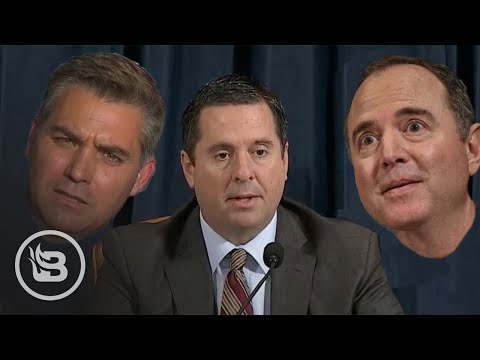 Thanks Gentlemen Id Like To Address A Few Brief

words to the American people watching at home if you watch the impeachment hearings last week. You may have noticed a disconnect between what you actually saw and the mainstream media accounts describing it when you saw three diplomats who dislike President Trump’s Ukraine policy discussing second hand and third-hand conversations about their objections with the Trump policy. Meanwhile, they admitted they had not talked to the president about these matters and they were unable to identify any crime or impeachable offense. The president committed what you read in the press were accounts of shocking damning and explosive testimony that fully supports the Democrats accusations. If these accounts have a familiar ring.

Its Because This Is The Same

preposterous reporting the media offered for three years on the Russian Hoax on a nearly daily basis the top news outlets in. America reported breathlessly on the Newest bombshell revelations showing that President Trump and everyone surrounding him were Russian agents. It really wasn’t long ago that we were reading these headlines fromNK] Congress investigating Russian investment fund with ties to Trump officials. This was false New York Times Trump campaign aides had repeated contacts with Russian intelligence. Also false slate was a trump server communicating with Russia.

This Was False New York Magazine Will

Trump be meeting with his counterpart or his handler. This was false The Guardian Manafort held secret talks with Asajj in Ecuadorian embassy. Also false UK President Trump directed his attorney to lie to Congress about the Moscow Tower project. All of these were false there was no objectivity or fairness and the media’s Russia stories just as a fevered rush to tarnish and remove a president refuses to pretend that the media are something different. different from what they really are puppets of the Democratic Party with their bias misreporting on the Russia Hoax.

The Media Lost Confidence Of Millions

of Americans, and because they refused to acknowledge how badly they botched the story. They’ve learned no lessons and simply expect Americans will believe them as they try to stoke yet another partisan frenzy. In previous hearings, I’ve outlined three questions the Democrats in the media. Don’t want asked or answered instead of shedding light on these crucial questions the media are trying to smother and dismiss them. Those questions start with what is the full extent of the Democrats.

Prior Coordination With The Whistleblower And Who Else

In These Depositions And Hearings.

Republicans have cited numerous indications of Ukraine meddling in the 2016 elections to oppose the Trump campaign. Many of these instances were reported including the posting of many primary source documents by veteran investigative journalists John Solomon. Since the Democrats switched from Russia to Ukraine for their impeachment Crusade. Solemn is reporting on burry Smih Hunter Biden and Ukraine election.

Medellin Has Become Inconvenient For The Democratic Narrative

and so the media is furiously smearing and labelling Solomon. In fact, the publication The Hill told its staff yesterday. It would conduct a review of solomon‘s Ukraine reporting coincidentally. The decision comes just three days after a democrat on this committee told a hill rider that she would stop speaking to the hill because it had run Solomon’s stories and she urged the rider to relay her concerns to Hills management. So now that Solomon’s reporting is a problem for the Democrats.

Its A Problem For The Media

as well like to submit for the record John Solomon‘s October 31st story entitled Debunking some of Ukraine’s scandal myths about Biden and election interference I encourage viewers today to read this story and draw your own conclusions about the evidence Solomon has gathered s unanimous consent that we put this in the record. Mr. . chair without objection the concerted campaign by the media to discredit and disown some of their own colleagues is shocking and we see it again in the sudden denunciations of New York Times reporter Ken Vogel as a conspiracy theorist after he covered similar issues, including a 2017 Politico piece entitled Ukrainian effort to sabotage Trump backfire My third question why did Barista hire Hunter Biden, what did he do for them and did his position affect any UK government actions under the Obama administration.

We Have Now Heard Testimony From The Democrats

own witnesses that diplomats were concerned about a conflict of interest involving Hunter Biden that’s because he had secured a well–paid position despite having no qualifications on the board of a corrupt Ukrainian company, while his father was vice president, charged with overseeing Ukrainian issues. After trying out several different accusations against President Trump, The Democrats have recently settled on bribery. According to widespread reports, they replaced their quid pro quo allegation because it wasn’t polling well. But if the Democrats in the media are suddenly so deeply concerned about bribery.

You Would Think They Would Take

some interest in Burry Smih pain Hunter Biden eighty-three thousand dollars a month and you think they would be interested in Joe Biden threatening to withhold us loan guarantees unless the Ukrainians fired a prosecutor who was investigating Burry Smih that would be a textbook example of bribery. The media of course are free to act as Democrat puppets and they’re free to lurch from the Russia hoax to the Ukraine Hoax at the direction of their puppet masters, but they cannot reasonably expect to do so without alienating half the country who voted for the president they’re trying. to expel Americans have learned to recognize fake news when they see it, and if the mainstream press won’t give it to them straight, they’ll go elsewhere to find it, which is exactly what the American people are doing you.

The president committed what you read in the press were accounts of shocking damning and explosive testimony that fully supports the Democrats accusations . This is because this is the same preposterous reporting the media offered for three years on the Russian Hoax on a nearly daily basis the top news outlets in. America reported breathlessly on the Newest bombshell revelations showing that President Trump and everyone surrounding him were Russian agents . The media’s Russia stories just as a fevered rush to tarnish and remove a president refuses to pretend that the media are something different from what they really are puppets of the Democratic Party with their bias misreporting on the Russi hoaxes, says President Trump . Trump’s impeachment hearings last week was a ‘shocked and explosive’ testimony that supported the Democrats’ accusations, says Julian Zelizer, but it was ‘shameful’ testimony was ‘disappointing and ‘shocking and ‘explosive’ testimony, he says . Zelizer says. It’s a ‘false’…. Click here to read more and watch the full video