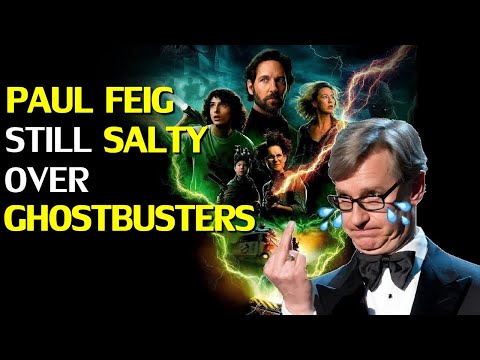 The Hit Film Ghostbusters Afterlife Will Soon Be Released

on physical media and to coincide with that Sony is releasing an 8-disc Ghostbusters ultimate collection to Blu-ray and 4k. The set naturally features the three Ghostbusters movies, namely the original from 1984, the sequel from 1989 and of course, part 3. Jason Reitman’s Ghostbusters afterlife absent from the collection. However, is Paul Feig’s female-centric Ghostbusters parody the activists on Twitter weren’t happy about this and raised the matter to Paul Feig himself, who subsequently called Sony out on it. In this editorial.

I Will Go Through What Was Said

why it made no sense and finally why the 2016 movie genuinely has no business being included in any Ultimate Ghostbusters collection as detailed in our earlier video on why so many critics wanted Ghostbusters afterlife to fail through a series of events back in 2016, Paul Feig’s Ghostbusters became. to Hillary Clinton’s failed bid to become president because of that intrinsic link. There are many most notably in the entertainment media complex who conflate the movie’s commercial fail Udavi box office with Hillary’s loss to Trump and her victory was something they had poured their entire heart soul and being into whenever These people are reminded of this movie’s failure. They feel the emotional pain of that electoral loss, which is why any kind of slight against this movie is reacted so vehemently against an outlet like film wouldn’t care if any other box set was missing a few movies, but this one being left out was big enough an issue that they posted a lengthy and cringe-worthy article about how problematic the mission was. This article was signal boosted when it was retweeted by none other than Paul Feig himself, who in the retweet addressed sony directly saying.

Know This Must Be A Mistake.

We do have a lot of vans and Bill Dan and Bernie were in it and it won the Kids Choice award for Best Feature film the year. It came out so I guess this was just an oversight hashtag. We are all ghostbusters. Then both this tweet and by default.

The Slash Film Article It Retweeted

was further signal boosted when the Hollywood reporter picked up on the story, so let’s dive in shall we going back through the signal boosting we are left with the cringeworthy Slash film article in which they try to obfuscate the simple fact that the Paul Feig movie is widely regarded as a bad film by saying before anyone tries to bring up critics ratings. Ghostbusters was review bombed so hard by toxic fans before the film even hit theaters it’s next to impossible to figure out. How the general populace actually feels about the film there? The narrative has been set and that narrative is that you can’t be sure the general public doesn’t like it because it was review bombed by the nasty toxic fans here it should be pointed out that in their write-up the Hollywood reporter did address that the figure movie failed at the box office and that the it word a lot of money around the world, but it just costs too much, making it economically not feasible to do another one so it’s too bad. I i you know the director he spent too much on it and he he he didn’t shoot scenes. We suggested to him has several scenes that were going to be needed and he said no we don’t need them and then we tested the movie and they needed them and he had to go.

in reshoots So yeah! So he will not be back on the Sony line anytime soon UK going back to the slash film article. It has made further plain what the author feels about both the Ghostbusters fan base and the existence of Ghostbusters afterlife. One of the biggest complaints made about Ghostbusters afterlife was that many felt it was a way to placate the abusive adult toddlers who cried about their ruined childhoods over the mere existence of Ghostbusters 2016 and the omission of the film in this ultimate gift set feels like just another form of rewarding toxic behavior and there we have it again. When the Fig movie subverted the brand and wiped the events of the two original movies out of existence that was good and well and progressive, but when the moviegoing audience flat out rejected it and the audience got what they wanted in Ghostbusters Afterlife and ghostbusters Afterlife wiped out the feed movie in the exact same way the Fig movie intended to wipe out the originals, then that’s suddenly problematic the double standard is as stunning as it is sickening from these people’s point of view making a blu-ray box set of the original movies, including afterlife, but deliberately leaving out the feed movie and then calling that the ultimate collection is immensely triggering, and when you dig through all these our grapes, that is what it all boils down to how can the collection be labelled as ultimate if it’s missing a movie. The article reads look I.

A Lot Of People Vehemently Despise The 2016

Ghostbusters movie and I’m not here to try to convince anyone to feel a certain way about it, but omitting the film from a box set called the Ultimate collection is factually inaccurate straight up disrespectful to everyone who worked on that film and is one hell of a problematic act of blatant erasure whoa projecting much the 2016 movie did all of those things as well as that it referred to Bill Murray as not ghostbusters material, and it found other ways to sideline and disrespect Every last one of the original ghostbusters be that as it may. This then is what the entire article rests upon and that is also where it falls apart. The main point of complaint. Here is that the blu-ray collection has the audacity to leave out the fake movie and still call it the ultimate. I think maybe Slash film and by extension, Paul Feig since he retweeted it has the term ultimate confused with the term complete.

If This Collection Had Been Called

the complete collection while leaving out the feed movie, then slash film would have had a point but it isn’t so they don’t. The term ultimate most commonly refers to the last in a series of events or stages. It can also refer to a point of origin of sorts that you have to move backwards to through a series of layers to get to or it could refer to something in its purest for good or bad most extreme or otherwise quintessential form that is the definition used in this case, and there is nothing factually incorrect about it. This ultimate ghostbusters collection could alternatively have been called the quintessential ghostbusters collection, and it would for all intents and purposes. have meant the exact same thing because this collection has been made stronger by way of a mission by losing the odd one out the one which only served to dilute and cheapen The brand.

You Are Left With The Three Movies

which are quintessentially ghostbusters and in the same continuity add a whole host of awesome bonus features to that and you are left with something that rightfully can be called the ultimate Ghostbusters collection for more details on that collection check out our show 4k for you. The most recent installment of which featured Tom and Valiant renegade take on this story and the box set at the center of it as usual. Let me know your thoughts on all of this in the comments you.

The hit film Ghostbusters afterlife will soon be released on physical media and to coincide with that Sony is releasing an 8-disc Ghostbusters ultimate collection to Blu-ray and 4k . The set naturally features the three Ghostbusters movies, namely the original from 1984, the sequel from 1989 and of course, part 3 . Jason Reitman’s Ghostbusters afterlife absent from the collection . Activists on Twitter weren’t happy about this and raised the matter to Paul Feig himself, who subsequently called Sony out on it . The article was signal boosted when it was retweeted by none other than Feig, who in the retweet addressed sony directly saying ‘know this must be a mistake’ and ‘know it must have been a mistake. We do have a lot of vans and Bill Dan and Bernie were in it and it won the Kids Choice award for Best Feature film the year. It came out so I guess it came out. It won the kids Choice Award for best Feature Film of the year’…. Click here to read more and watch the full video