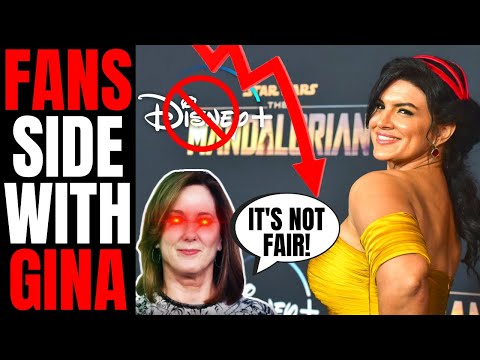 with rk outpost and when we saw the massive backlash that Disney and Lucasfilm received in the aftermath of them firing Gina Carano for her political opinions. We all knew that the vast majority of people thought that this was wrong, especially when you consider the hypocrisy the double standard that so many pointed out that Disney and Lucasfilm have so many people working there that say far more inflammatory things on social media, but nothing happens to them because they’re on the right side of the Disney Hollywood echo chamber now people may not have agreed necessarily with what she said maybe they thought she could have worded it differently, but they did not think that she should have lost her job that she should have been fired that she should have been attempted to be cancelled by these people and now. We have evidence to support that not only are they getting backlash on Youtube channels on social media posts, But now we have actual polling data that suggests that the vast majority of people do not support her being fired take a look exclusive poll majority of Americans less likely to support Disney over woke politics firing of Gina Carano. Now this pole dat is coming to us from this one public opinion strategies they do do a lot of polls and things so it’s not just like a twitter poll someone pulling it out of their ass. Things like that just wanted to make that clear up front Americans are rejecting Disney’s dive into woke politics and disapprove of the firing of Mandalorian standout.

found Corporate America’s luncheon to quote wokeness and cancer culture might hit a bump in the road given public. Reaction to Disney‘s recent actions pollster Neil Newhouse of public opinion strategies concluded assessing data from a recent survey conducted February 26 to March 3rd. Now before we get into that actual hard data just remember just the things that we have been seeing the cancel Disney plus movement the barrage of posted there yet supporting Gina Carano on twitter on Facebook whenever they post something people calling out their hypocrisy or you can look at the star Wars Youtube channel and see that it’s consistently every time they post a video. It is getting down voted and ratio to hell with the vast majority of the comments we can go take centuries before we take a look. The vast majority of the comments end up being Gina Carano quotes the fans support Gina Carano in droves where are all these other people that are maybe down voting Ben shapiro’s.

don’t really exist. There’s not that many of them not that many people actually wanted to get her cancelled, but they are the ones that manipulated the media to into making this narrative about her, which resulted in her getting fired. Among other recent Disney news participants of all stripes, Republicans, Democrats and independents were asked questions concerning Disney’s ties to China. The company’s threat to abandon doing work in Georgia over pro-life legislation and the recent firing of Carano over an allegedly offensive social media post. Now.

This Is Just A Poll Of People

in America to be fair, so I know I have a lot of people that watch internationally. This poll was specific to American politics, notably participants were shown the social media post in question from Carano and overwhelmingly thought the fine was unjustified 72 percent to 28 now. Wonder if they would have been shown a similar post maybe from Pedro Pascal calling half of America Nazis I wonder what they would have said about that post. I wish they should have shown that she should probably do a poll showing them that and think if they think the equal result should happen to that person to be clear I’m not calling for that I’m simply pointing out the ridiculous double standard with at least half of Americans opposing each of Disney’s actions tested and also being less likely to watch Disney’s programming companies may be wise to slow the stampede of Wokism. The data clearly shows the actions like the ones.

Disney Has Taken Definitely Have The

potential to negatively impact its bottom line. Now. I think this is very interesting because people were asked first just blindly do you think Gina Carrano should have been fired. Then they were shown the actual post and told to analyze it for themselves and they gave a different answer because again the woke. Mainstream media narrative has been something telling everyone that Gina Carrano was something she is definitively not.

When First Asked Americans Were Found

to oppose Disney’s decision to fire Carano 58 to 42, including a majority of Americans across all age groups, gender and ethnicity. Majorities of Republican and independents. Similarly opposed to firing and 40 percent of Democrats honing in on Carano. The polling data found more than 70 percent of Americans believe the actors should not have been fired after assessing it for themselves right so that’s what we’re talking about this 72 to 28 after they actually read the post. If they actually decided for themselves.

They Didnt Think That She Should Be

fired overwhelmingly. After reviewing the post 28 percent said Disney. was right to fire. Carano 39 said it may have been poorly worded, but she did not deserve to get fired and 34 said they found nothing wrong with the quote and Gina Carrano should not have been fired The the opposition to Carano’s Fire even held true with Democrats and liberals. A majority of every single group tested any way you break it down thought that it was wrong once they analyzed it for themselves that is what Disney has done that is what a bad decision Disney has made.

There Is Virtually No One On Their

side if people actually look at this post and read it for themselves. Seventy percent of Disney fans also said Carano should not have been fired and here is where it gets really strange and really troublesome. If you’re Disney because it’s not just that it’s just not that reason that people. have a bad view of Disney right now notably 61 percent of those with a quote less favorable impression of Disney identified the firing of Carano and other canceled culture actions the company has taken some of the comments include Disney defended using sets near slave camps in China, then firing people for having different views than the boss has they’re yielding to woke cultural activism. They’re developing a full-blown cancer culture.

They Came To Liberals Of The Canceled Culture.

If she had liberal views. She would be hailed as a champion that’s 100 true they fired an actress who dared to be conservative. This also goes into other things. Other reasons why people are walking away from Disney and this is the real thing people can only be pushed so far every time.

One Of These Moments Happens More

and more people step away from Disney they cancel their. Plus they cancel their annual park membership. These are all things They’re just drops in the bucket, but they slowly add up over time. Sixty-four percent of Americans oppose Disney’s decision to close down popular rides after activists said the rides have racist origins and messages in the same vein. Americans were predictably displeased with the company.

S Quote Political Correctness By A 65

to 35 margin. Americans believe companies like Disney have taken political correctness too far that is absolutely insane. A mere 25 said Hollywood was not biased against conservatives. I’m surprised it was that high to be honest with you. So 75 percent of people understand reality that Hollywood is extremely biased against anyone with an opposing viewpoint and it shows 84 percent of people opposed.

Disneys Decision To Film A Movie

in China as the Chinese Communist Party allegedly engaged in genocide of the Uyghurs. The Disney’s. actions were found to make a majority of Americans feel less favorable at the company and less likely to watch Disney programming. 60 percent of Americans say they have a less favorable impression of the company and 58 say they are less likely to watch Disney programming That is a big deal. We knew that it was bad.

We Knew That People In The

vast majority of cases did not agree with them firing Gina Carano, but now we have the actual evidence and the proof that shows that they are less likely to support Disney because of this. This is a big deal like we’ve been saying all along it’s not just a fringe group of people that support Gina Carano. It is the majority of people normal people support Gina Corrano the weird Cancel culture mob that succeeded in getting her fired. They are in the minority they are the freaks. They are the weirdos and we just have more evidence to back that up let me know what you think about all this In the comments below Smash the like Button subscribe to the channel ring The Bell for notifications share this video out there and I’ll talk to you later thanks for watching everyone and a huge shout out to my patrons.

follow me on Twitter instagram check out the description below you’ll find links to my p.o box and my patreon as well. I’ll talk to you guys later you.

Disney and Lucasfilm fired Gina Carano for her political opinions . ExCLUSIVE polling data shows that the vast majority of people do not support her being fired . The pollster Neil Newhouse of public opinion strategies concluded assessing data from a recent survey conducted February 26 to March 3rd. Americans are rejecting Disney’s dive into woke politics and disapprove of the firing of Mandalorian standout. Exclusive polling data has found Corporate America’s luncheon to quote wokeness and cancer culture might hit a bump in the road given public opinion given public given public’s reaction to Disney’s decision to fire Carano. The public is less likely to support Disney over woke politics firing of Carano, according to an exclusive poll. The survey was conducted on February 26-to-March 3rd . The survey concludes assessing data was conducted by public opinion strategists. It concluded assessing Data from a survey conducted on March 26-March 1st . The public opinion strategy concluded assessing the data from an earlier version of the survey…. Click here to read more and watch the full video