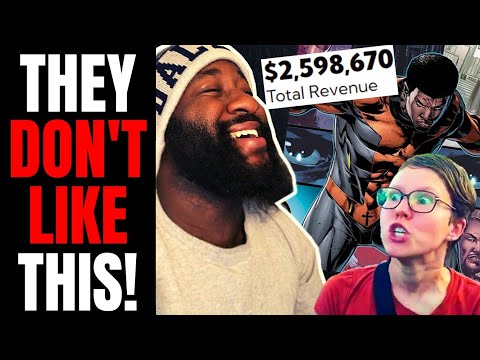 Less Than A Week After Launching His

new comic book universe, The Ripovers Eric July has already seen massive success when you take a look at this and you realize that less than a week into this he’s now up to nearly 2.5 million dollars and over 28 000 individual customers. Those are insane numbers for anyone let alone the number one book or the first book for his comic book publishing company he did it by himself. He took his own money because he believed not only in himself and the ideas that he had but in the audience because the audience is sick and tired of woke garbage from these comic book companies. They’ve said it multiple times they don’t want this they’re rejecting all of this stuff from the mainstream and Eric July with a crossover between several different communities online realized that was his opportunity he is capitalized and you see even in the New York post.

defies cancel culture earns 1.7 million dollars in four days well again they need to update this headline because after not even a week we’re damn near up to 2. 5 million, but it hasn’t been without some criticism. There are so many people taking shots at Eric July simply for doing his own thing and a lot of them. a problem with it because they’re jealous that’s the bottom line These people are jealous that he is having success when he hasn’t paid his dues yet look at this reply from this guy who’s part of some.

was like go hood comics something like that, but it’s focused on telling stories for a black audience. He says my point is and I’ll end it here you’re rambling on about people hating on you and that’s not true. They want to see you earn your spot in this space outside of your political following sales. From that following certainly don’t mean you can look down on others in the community ripple responds because you know he will I find it hilarious that people indy or not think I answer to them or I’m required to earn something just because they exist These people do. Not at all understand what the point of anything we’re doing here and that’s fine and that was not the first person certainly wasn’t the last look at this.

I Talked About It The Other Day As

well, But there’s one person out there. Black Sands entertainment who is you know the self-proclaimed number one. Black comic book publisher in America has a problem with Eric July because he doesn’t agree with him politically because he doesn’t think exactly the same way that he thinks he should He put this up here. Black Sand entertainment I’ll just rest my case here believe what you want my crew is all black and everyone I affiliate with is an ally to black causes. You guys really champion a dude that goes out of his way to champion Kyle Rittenhouse publicly and of course, Ripple laughed this idiot off and made a video.

Him Monetizing Him And Selling Many More Comics

out of his stupidity. I certainly anticipated this it’s the envy they look at it like they’re more deserving of the success because of superficial reasons, but the real truth here is that this should be getting way more press and it should be should be getting way more attention than it is you see places like Fox News in the New York post covering it but why haven’t we seen anyone in the actual comic book space the legacy comic book space the media why have we not seen them talking about this I’ll go to comicbook. com You’d think that something that hits 2. 5 million dollars in less than a week should be huge news at all these mainstream outlets right I mean you would think so I mean I don’t see it near the top anything maybe they did something. This weekend, Maybe they did something this weekend Let’s search for ripaver Shall we let’s search We got some ads wait no results no results for coming on rip Averse that’s weird isn’t it the the thing that made more money than the biggest crowdfunded comic book in history.

Youd Certainly Think That Deserves To

be news on comicbook.com right what about something like bleeding cool they they cover comic book stuff right I’m sure they want everybody to know about the ripaverse let’s search ripaverse here you can’t see it on the front anywhere. No we’re on the front but let’s search rip averse let’s see what we get from bleeding cool Ah search bleeding cool for rip Averse we got some ads. No results isn’t that weird don’t you think this should be one of the biggest things in the comic book industry. Right now everybody should be.

Talking About Eric July, But No

the only people that are you know bold enough to actually talk about it are the ones that are jealous bitter blumin just like this guy just like so many of the people that came after him online because he doesn’t think the same way they do. Despite the fact that his comic is apolitical. Despite the fact that he wants to sell to everybody not just if you agree with him that’s not good enough. These people want him to do it their way well that simply ain’t gonna happen as you can see it’s paying off dividends for Eric July Rip Averse I saw number one nearly at 2. 5 million in less than a week thanks for watching everyone and a huge shout out to my patrons.

Eric July launched his own comic book universe, The Ripovers, less than a week after launching his new comic book series . He’s now up to nearly 2.5 million dollars and over 28 000 individual customers . The comic book is the number one book or the first book for his comic book publishing company . But it hasn’t been without some criticism, with some saying they’re jealous that he’s having success when he hasn’t paid his dues yet . July: “There are so many people taking shots at Eric July simply for doing his own thing and a lot of them. They want to see you earn your spot in this space outside of your political following sales sales. From that following certainly don’t mean you can look down on others in the community ripple responds because you know he will,” he responds because he will I find it hilarious that people indy or not think I answer to them o the answer to those who don’t think I answered to them’ response to those comments ….. Click here to read more and watch the full video