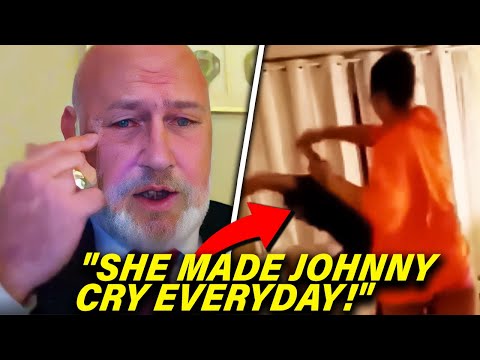 Amber Heard Is A Lot Of Things

and being demanding has become one of them. This was revealed by Johnny Depp’s Bodyguard, who confessed to witnessing the ex-couple past stormy relationship. Clearly some friends colleagues and employees of the ex-couple have testified and shared their thoughts on the ongoing trial. While some have turned to social media to give their opinion. It may surprise you to know that an employee that shared in the ex-couple’s nearly every day-to-day activity has stepped out to take a stand at the Virginia court what has he retweeted and can we also hold on to this information as the truth let’s find out as we get right into the video.

the stand in the Hollywood Star’s defamation trial against his ex-wife and testified to observing the ex-couple’s relationship hitting the rock. He also claimed that he injuries and marks on Johnny Depp‘s face as his marriage to Amber heard got increasingly more unstable. In addition, he explained to the court how the relationship between the couple went extremely sour as Amber heard became more dominant and demanding. Just like the beginning of every love story. The two stars were deeply into each other as connolly testified but along the line, the relationship hit a stormy wave and the love that used to exist between them faded gradually.

He Added That They Began To Argue More

often at the beginning. It was all Lovey-dovey everything was great honeymoon period was on and yeah. It was good. It was great to see Johnny happy again. Amber was lovely charming as she usually is and good as Gold Amber started to change.

demanding. I could see that Amber wanted to wear the. In this relationship that was pretty obvious he said the bodyguard added that heard could get frosty at the drop of a hat and over time witness depth getting quieter as Amber started getting grumpy. In addition, the bodyguard provided an observation he made at different times. When the couple argued I could hear Amber screaming.

I Could Hear Shouting And Bawling.

He said adding that he could mostly hear heard shouting and that the couple fought more often than not. Although he didn’t testify to witnessing any form of violence. Connolly told the court that he began noticing scratches and injuries on depp’s face and guess what he confessed that he never saw any marks on herd. What I noticed straight away was.

Most Of These Marks Were Happening

on the left-hand side of his face. Connolly said there would be scratches on his neck maybe a fat lip. The corner a bruising in the eye socket. It was getting more regular not every week, but it was definitely happening. He added to further prove his testimony.

A Photo Taken By Connolly Himself Was Shown

to the jury. The photo was taken during the ex-couple’s Honeymoon In 2013. Depp, who is in the picture alongside his now-ex-wife and three others appeared to have visible injuries and swelling on his face. When asked to describe the photo Connolly pointed to the swelling on the left-hand side of Depp’s nose and under his left eye. As expected the bodyguard was cross-examined by Amber’s attorney and when asked to describe what he thought had happened.

He Said Either Hes Walked Into A

door or a door has walked into him, prompting laughter from the courtroom, especially from team Depp well that’s really Hilarious and it sure appears as though the pirates. sense of humor has rubbed off on his team. Depp’s fans have roared all over social media and anger and disgust for what they believe to be evidence of Amber abusing their dearly loved star. This is what the fans had to say fans have seen this photo and speculated that Johnny Depp was injured on his honeymoon for years. Their bodyguard Malcolm Connolly has just confirmed it.

A Fan Wrote And Posted One Of

the honeymoon pictures with the ex-couple and three other people in it. In the picture Depp’s pink bruised face is very noticeable well that’s saying a lot if you’d asked me. Malcolm knows what he saw and heard testifying that Amber heard chased Johnny Depp from the house in Australia after he cut his finger off screaming at him, calling him a coward mocking him again for leaving the situation. This After she claimed he held her hostage for three days. Another fan wrote, I loved Malcolm Connolly so much he has his ex-hmP prison officer training.

He says it how it is dealt with Rottenborn really well. He heard Amber screaming at Johnny and showed the language she used great testimony a fan wrote while commending the bodyguard’s performance in court. While some fans have called our attention to how incompetent. The lawyers in team Amber are one fan wrote real Amber heard where did she find these attorneys They’re doing a great job of proving Johnny Depp was victimized by her hashtag Amber Monster team Johnny Depp.

These Lawyers Are Ruining Their Careers.

They look ridiculous and incompetent. I hope heard is worth it to them. Another added. Some Have also concluded that Amber’s lawyers had no choice but to please her till the trial ends they are either completely inept or at the point where they know she’s screwed, so they’re just circus clowning it because they’re stuck with her.

I Feel Sorry For The Ah Legal Team.

They need to work with what Ah gave them for the trial and present it is true. I think they only want this to be over so they can go back to their normal lawyer’s life and forget that they’ve ever represented Ah in court as expected team Amber has been astonished, but they have remained loyal to the Aquaman star here’s what a few of them had to say one fan wrote Imho he was probably drunk and fell on his face. This is not uncommon for drug and alcohol abusers. The fool should have never filed this lawsuit.

He Will Lose And Has Also Damaged

any prospect of future work. Don’t do drugs people Don’t get drunk people be happy Another wrote Amber is innocent guys all those years of torment. I can’t believe it why can’t people see the truth. She’s been abused by Depp so badly she’s such a strong woman and I ask that all men should support her hashtag Amber heard is innocent of course. Some fans believe Depp’s bodyguard supported him and accused Amber hurd because he directly works for Depp.

has claimed in court that she spat in her face and sent abusive texts. During her time when she worked with her well that’s just disgusting Catherine James went further to explain to the court everything you could possibly do to run someone’s life she went on to list tasks such as grocery shopping dealing. with travel dealing with decorating and liaising with people on film sets and when asked about her salary and if she was paid. Catherine confessed that although she was paid, she was paid very poorly as expected. Catherine asked for a salary raise, but according to her, she leapt up out of her chair and put her face about four inches from my face spitting in my face, saying how dare I ask for that salary.

In Addition, Catherine Went On To Say That

Amber was verbally abusive when she worked for her and told the court that she screamed over the phone at her multiple times. Catherine also claimed that Amber sent barrages of abusive text messages which became a habit of hers. Catherine added that the text would often be incoherent and not really making sense. Catherine boldly revealed that Amber’s family members were not left out in.

Abusive Games As Her Sister, Wendy

heard was also verbally abused by her Catherine regarded it as a kick-the dog kind of relationship well that came directly from an employee who used to work for the Aquaman Star and now the fans are left to decide on how to perceive the star one fan wrote, Kate James statement is so sad. I read that bit you tweeted and think about how badly Jd must be scarred from all the abuse he endured from her another wrote. This actually breaks my heart and makes me feel physically sick. It sends me straight back to a time that I’d rather forget.

I Know How Abusers Work And Operate.

This latest revelation has further shown that there is more than meets the eye or could the future reveal something else. We We probably don’t know let us know what you think in the comment section below do well to like this video and subscribe to this channel till then remain informed.

Depp’s bodyguard whose name is Malcolm Connolly took the stand in the Hollywood Star’s defamation trial against his ex-wife . He testified to observing the ex-couple’s relationship hit a stormy wave and the love that used to exist between them faded gradually . The bodyguard added that they began to argue more often at the beginning . He also claimed that he injuries and marks on Johnny Depp’s face as his marriage to Amber heard got increasingly more unstable . In addition, he explained to the court how the relationship between the couple went extremely sour as Amber heard became more dominant and demanding . He added that heard could get frosty at the drop of a hat and over time witness depth getting quieter as Amber started getting grumpy . The two stars were deeply into each other as connolly testified but along the line, the relationship started to change . The trial is still ongoing and is expected to last for the next month. The trial continues to continue to continue. The…. Click here to read more and watch the full video