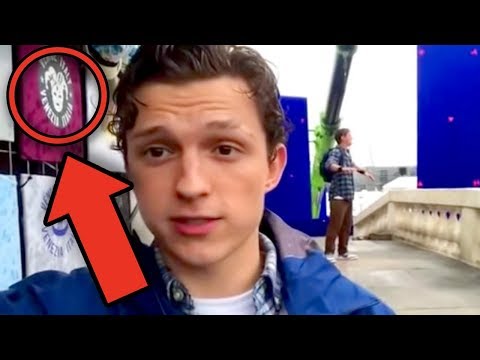 homecoming sequel the upcoming Spider-man Far from home. He’s coming July 2019 just a few months after Avengers 4 and as more and more behind the scenes social media post come out it’s appearing increasingly likely that far from home could actually feature the sinister six. This is all thanks to Tom Holland, whose generous insta game has made any trailers for this movie completely unnecessary who are all the new characters and possible villains that have been announced for this movie and what could these announcements tell us about far from home story Let’s start way back at the end of Spider-man homecoming in the post-credits scene we saw Michael Keaton‘s villain character Marvel_Comics)” target=”_blank” rel=”noreferrer noopener”>Adrian Toomes aka the vulture behind bars crossing paths with this guy now. This is one of Tim’s old associates Mac Gargan played by Michael Mando so I got. His neck the Scorpion shaped one of a Scorpion and the Marvel comics Matt Gargons Alter-ego is the Spider-man villain Scorpion and he says this interesting line of tubes.

Ive Got Some Boys On The Outside Whod

love to meet him. You know take a picture slice his throat put his head in the dryer why a dryer Mack I guess just don’t mix Peters bloody severed head with the white clothes nasty stains Gargons words got us all pumped because any hint toward a group of criminals conspiring to kill Spider-man has to be considered a nod to the sinister Six. They’re a team of six Spider-man villains led by Doctor Octopus to kill Spidey. Originally it was Doc Ock Vulture, Electro Kraven, the Hunter, Mysterio and Sandman. Though the lineup has changed over the years with other villains like Hobgoblin, Chameleon and Rhino and Scorpion rotating in there.

At Sony To Make A Sinister

six movie four years remember the amazing Spider–man 2 in 2014 ended with a major tease toward the censors sixteen headed up by Harry Osborn. It would have included Rhino Vulture, Doc, Ock Mysterio and Kraven The Hunter Drew Goddard was originally going to direct this sister 6 Spin-off actually saying he wanted to adapt a more classic adaptation that would have included Sandman in made goth Politer. He actually wanted it to be a Redemption story without Spider-man, but then Sony scrapped these plans when they announced a rebooted version of Spider–man in the UK in a joint partnership with Marvel Studios. Also, there was a leaked email from Sony executives suggesting plans to do a Sinister six movie. As part of this partners assuming the deal went well and it definitely has Spider-man homecoming topped both the amazing Spider–man films and Tom.

Made His Version Of The Character

a huge hit and now as we get updates on Spider-man far from home. It definitely does appear to have multiple villains being added to the cast. First. It was announced that Michael Keaton would be returning as Adrian. Toomes Vulture in that post-credit scene with Mac Gargan Tombs defended Peter Parker by refusing to give up his name, but whether he’s a reluctant villain or caves and helps Gargons guys track down Peter Vulture will be part of the sequel in some way and I think it’s safe to assume Scorpion will be as well.

Now Scorpion In The Comics Is Similar To

Spider-man and that his UK is enhanced with arachnid abilities and he wears a suit with a cybernetically controlled tail. This version of Mac Gargan appears to be adapted from the Ultimate Comics, in which Gargan is a Mexican crime. Mac Gargan later becomes one of the hosts of the Venom Symbiote, so he could be a way to spread Venom into theNK] crossover part of the Sony Verse. That is if the studio wants to leave the Tom Hardy Eddie Brock Venom version in its own sub-universe, so with Vulture and Scorpion that’s two villains but around the time of Keaton’s return was announced reports came out that Jake Gyllenhaal was in talks to play Mysterio. Mysterio is Quentin Beck, originally a special effects wizard and stuntman working in Hollywood.

technology in hypnosis and smokescreens to get inside his victims heads and wears a fishbowl style helmet to protect himself and while We’ve been waiting for more details about Mysterio and trying to track down pictures of Jake Gyllenhaal in London. It was announced that Turkish actor Newman, a car would join the far from home cast as a character known only as Dimitri Now. There is a Demetri in the Spider-man comics Dimitri Smerdyakov for the pronunciation. It’s also known as the Chameleon now The Chameleon is a master of disguise. Some versions of the villain over the years have given him shape-shifting powers, but the original in the most recent version are more practical.

He Wears A Mask Of Peoples Faces And

he impersonates them perfectly. He’s basically a TOm Cruise in every Mission Possible movie in an Instagram post-a car included some hashtags that seem to confirm Jake Gyllenhaal as Mysterio in the movie, along with appearances from Samuel L. jackson as Nick Fury and Cobie Smulders as Maria Hill. In the most recent possibilities of a new villain came one again from TOm Holland, who took to Instagram to plug a charity. He works with joking about a stand-in who does his stunts.

this footage. First notice that t-shirt rack those set the scene in Venice Italy establishing the city as one of Peters. Many destinations in this European adventure that will also feature London and Prague, but more importantly that big wave attack has led to some speculation that the villain Hydro-man could play into the plot as well. Hydra man is more bench. He gains the ability ability to manipulate water after Spiderman knocks him from a cargo ship that was experimenting in ocean water and yeah.

of Sandman and Hydra. Man did actually join Da in a pseudo-sinister six group called the Sinister Syndicate in the Spiderman ride at Universal Studios Orlando so that makes four to five possible villains all appearing in Spider-man far from home. So if this isn’t an attempt to assemble a sinister six in the UK, then what is it we know the studio has been dying to put the Sinister six in some movie, and this is the first real opportunity for them to do it. Sony recently reminded us all that they still retain the film rights to 900 Marvel characters and any chance they get to make money off of them. They’re gonna jump on it ever since Sony.

Its Deal With Marvel, Theyve Had

one movie home coming to establish the new incarnation of Peter Parker and to team-up movies in which he plays a supporting role. Now Spider-man will finally have a big sequel Otto himself where he can expand his own world with several Spider–man iconic villains and at this sinister six theory is true that just leaves one more mystery villain I’m gonna go out there and say Doc Ock mostly because the Sinister SIx has classically been his operation now. J. b Smoove has also been announced to play a major character in far from home. Maybe will be the party place the saying the tinkerer from homecoming is still out there after that movie and I could see him tinkering some new scavenged Atari or Ultron tech into some cybernetic arms that could be used to rip off Peters head and throw it in.

and insert the quarters and twist a knob to permanent press really the frustrating thing about all this is it’s probably gonna be a while before we get confirmation on the sinister six either way because according to theNK] guys Peter Parker‘s just a pile of lint that Tony Stark astha keeps shaking office clothes. I suppose that’s what happens after you don’t clean out the lint trap after you put Peter Parker’s head in the dryer until we get some announcements about Avengers 4 like a trailer or a synopsis or a freakin title. At least the studios are obviously gonna be pretty hamstrung to reveal any details about far from home because they would have to explain how Spider-man is even alive before they reveal anything about the villains so here’s a question I’ll leave you with who else should. Be another villain in far from home would you prefer Doc Ock or maybe Green Goblin or Venom or Carnage comments down below with your thoughts and follow me on Twitter and Instagram at Ei Vas to keep track of me and some fun projects like on the works for you Guys like this video share it around and subscribe to new rockstars for more of this Marvel nerd theory stuff because Lin Spider-man far from homes title is revealed to be just a fake cover for its real title Spider-man and the Sinister six, while everyone else is surprised by this news, you’re gonna be like boss called it and if that isn’t the case he’ll just forget you ever saw this video.

Spider-man Far from home is coming July 2019 just a few months after Avengers 4 and as more and more behind the scenes social media post come out it’s appearing increasingly likely that far from home could actually feature the sinister six . Tom Holland’s generous insta game has made any trailers for this movie completely unnecessary who are all the new characters and possible villains that have been announced for the movie and what could these announcements tell us about the story . The sinister Six is a team of six Spider-men villains led by Doctor Octopus to kill Spidey . Originally it was Doc Ock Vulture, Electro Kraven, the Hunter, Mysterio and Sandman but has changed over the years with other villains like Hobgoblin, Chameleon and Rhino and Scorpion rotating in there . Spider–man 2 in 2014 ended with a major tease toward the censors sixteen headed up by Harry Osborn . It would have included Rhino Vulture and Electro KraVEN, the hunter and the villain…. Click here to read more and watch the full video