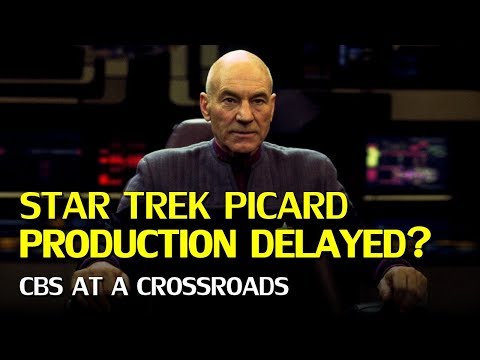 When It Comes To Behind-The-Scenes Drama, The

Star Trek franchise has something of a checkered past. However, the highly anticipated Picard series has the potential to take things to a whole new level. Previously. We have reported that just one week prior to cameras being scheduled to rollNK] and production company’s secret hideout were at an impasse not only over the visual look of the series, but also key Story aspects unless the solution can be found and fast. The production will have to be delayed an incredibly expensive last resort that nobody wants.

However, One From Uk Point Of

view could prove to be the lesser evil. Production was scheduled to begin on Monday April 15th of 2019. That date came and went with no outward signs of any filming having taken place. As of the making of this video, filming has not yet confirmed to have begun. Production may already be one full week behind schedule.

In This Video, We Will Look At

the underlying cause of the production delay, how long it might be before filming actually begins the different paths available to UK their likely outcomes and how they might respond to the situation. The Picard series is under the same alternate license as Star Trek Discovery and the Kellan Timeline movies. It is also written, produced and visually conceived by the same core team behind Star Trek Discovery, many of whom were in turn brought over from the Calvin Timeline movies. As such, the Picard series conceived visual appearance is an unmistakable further evolution of the visuals seen in the Calvin Timeline movies and most recently in Star Trek Discovery. Subsequently It doesn’t appear that it could have ever evolved from the Canon of the next-generationNK] series or movies The look The Picard series is going for is one that licensees know from past experience will not sell as their customer base does not respond to it.

This Is Why Purportedly They Will

not commit to produce any merchandise to speak of for the Picard series the way it is currently planned. One of the lessons the current UK management reportedly have learned since the ouster of UK and discovery progenitor Les Moonves in no small part from seeing the hard numbers is that if the licensees won’t get on board something for the most part they didn’t do for Star Trek discovery that is a good indication that the built-in fan base also will not get on board that in turn means that the built-in audience won’t subscribe to. access in the numbers UK needs to grow the service in accordance with their projections by all accounts few other audiences then the built in Star Trek audience signed up for all axis either, which makes this current iteration of Star Trek. The flagship series of this service a money loser for UK. As such, it is in the best interest of UK to salvage their flailing digital service.

By Course-Correcting Star Trek, Which They Are Reportedly

doing by mandating the changes required to win back the built-in audience for Star Trek Discovery. This meant the original plans for the series were scrapped. Season 2 was hastily rewritten to banish the discovery and its entire crew in the future, where they could violate the Canon. No more those left behind agreed to regress their technology in a major way and to never speak of the discovery or its crew ever. The Picard series, which is still in development.

were requested to alter previously agreed-upon designs and plot points in order to bring the series closer to Canon, creating distance from the discovery brand of Star Trek. Doing so, however, would not be best interests a production company secret hideout and the powers that be behind them not only would altering the visuals and controversial plot points compromised their creative vision. It would expose them to the risk of not seeing any revenue from merchandise. Even in the event. Licensees were to sign on if sufficient changes were made for more information.

of the Star Trek rights and the intricacies of the license as this all goes back to the rights divide following the Viacom split what this means for UK is that they have a decision. Make UK are at a crossroads. They must choose a path and they must choose it yesterday as we’ve established production could already be one week behind schedule, which UK would have to pay for and close to full cost with nothing to show for it and they would have to pay even more to make up for that lost time for every day that passes with no filming costs will continue to soar. We do not yet know which course of action. NK] have chosen or if indeed, a final decision has been made, but we can entertain some informed speculation on which paths they have to choose from.

There Are Variations, But Ultimately It Boils Down

to two one is proceeding with the series a secret hideout had intended if they were to go down this path any outstanding work could be completed and production could commence rapidly. rapidly, In an interview with Trek movie director Jonathan Frakes revealed that the series is being made in production blocks of two episodes each. This means the ripple effects of a late start can be kept to a minimum, although they would have to at the very least complete the first block in later pickups however, proceeding with the series that secret Hideout had planned would preclude making sufficient changes to win licensees back on board the series would like discovery before it be released without merchandising support to speak of it would remain to be seen if audiences would respond to the controversial storylines any better than the licensees. We have heard that secret Hideout have been fighting hard for UK to land on this path. The other path available to UK is to halt production and rework the entire series to where it will be acceptable to licensees.

And In The Process Hopefully Go Down

better with the built-in audience, making them more positively inclined towards UK all access. However, that would involve delaying production for months, which would add substantially to the cost of making the series a series which is already on track to be one of the most expensive 10 episode series ever made. If UK were to choose this option and the audience still didn’t respond and if UK all access didn’t get a boost that would justify all the expense it would have significant fiscal repercussions for UK and major career consequences for those responsible on top of this walking down. This path could also bring about a major conflict with secret hideout and bad robot as it would undercut them lawyers would get involved which comes with its own set of costs and uncertain outcomes. These Are the options that UK has to choose from outwardly, though appearances must be kept up.

given the rumors surrounding the production. Many spent the week starting with April 15th waiting in anticipation for a tweet or other signs of life from showrunner Alex Kurtzman first block director Hon L Culpepper or anyone else involved with the production to confirm it had indeed begun no such confirmation was forthcoming instead. Three more cast members were officially announced on Wednesday April 17. The announcement did not mention anything about a premiere date or the start of production. The sad Irony is that of all Star Trek productions released or announced ever since.

The Cancellation Of Enterprise.

Picard is the one series that many fans are actually excited about and the one that at least on paper by all rights they should be a. Common fan complaint against All Star Trek since 2009 is that they have either been alternate versions of a time frame already explored or proclaimed prequel to the original series that has done nothing but wreak Havoc on canon Fans have been vocal about their desire to see the Star Trek franchise move forwards instead of regressing backwards unless you count the recollections of Spock Prime In 2009. Star Trek, which technically is part of the ultimate iteration of Star Trek not the original canon. The Picard series marks the first onscreen venture into the uncharted post-next generation era in nearly two decades.

Therefore On Paper This Is The

series that both fans and licensees should be lining up to see as well as buy and sell merchandise had it not been for them being tarnished by their inclusion in Discovery. A case could have been made that designs. and visual secret hideout were going for might have been justified in the series set almost two decades after the events of Star Trek Nemesis. However, in no small part due to Star Trek discovery that very aesthetic is causing problems for the Picard series Visuals.

Aside That The Same Basic People Creatively In

charge of discovery are also in charge of the Picard series does not generate much in the way of enthusiasm among the built-in audience how those problems will be resolved and how quickly production will commence remains to be seen. We will keep you up-to-date on the situation as we learn more till then let us know your opinion on all this in the comments below. If you like this video, then please help share it and share your opinion in the comments. Midnight’s edge aims to give the most comprehensive analysis and commentary on genre.

of our videos, then please subscribe hit the Bell icon and remember to indicate that you would like to be notified when new videos are uploaded. If you really like what we do, then please support us on Patreon until a better alternative comes along or send us a direct donation through UK. Also check out our sister channel Midnight’s Edge after dark for live shows and other rants follow us on Facebook and Twitter and stay tuned for more here at midnight Sedge Oh.

Production was scheduled to begin on Monday April 15th of 2019 . That date came and went with no outward signs of any filming having taken place . Production may already be one full week behind schedule . The Picard series is under the same alternate license as Star Trek Discovery and the Kellan Timeline movies . It is also written, produced and visually conceived by the same core team behind Star Trek . It doesn’t appear that it could have ever evolved from the Canon of the next-generationNK] series or movies . The look The Picard Series is going for is one that licensees know from past experience will not sell as their customer base does not respond to it . This is why purportedly they will not commit to producing any merchandise to speak of for the Picard series . The series will not be produced any merchandise . It will not appear to have ever evolve from the . Picard series. The Picard visual appearance is an unmistakable further evolution of the visuals seen in the Calvin Timeline movies and most recently in Star Trek…. Click here to read more and watch the full video