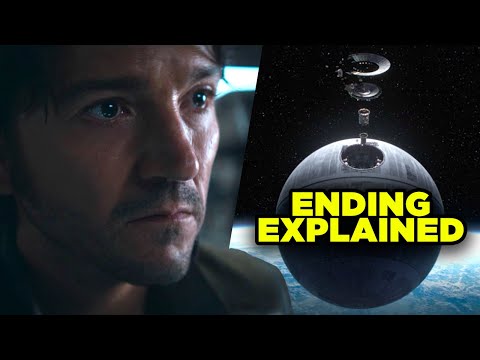 and this is an explanation of the ending of the season finale of Star Wars and Org and Thank you toNK] Games for sponsoring this video more on them in a moment I’m recording this right as I’m prepping a lead for my Thanksgiving holiday so I’m really just going to talk about the ending of this amazing season of streaming content and how it was so cleverly set up throughout the season. There’s gonna be a lot that I don’t cover in this video but that’s all going to come out in my full episode breakdown that I’m gonna take some extra time with that’ll come out on Monday thank you so much for your patience as always I think you know by now that I like to dive deeper into the visuals try to correctly identify all the Star. Star Wars ship designs and translate all the orabish It’s gonna be hard for me to do all that while I’m traveling to be with my family so anyway. The ending of this amazing season and or was always conceived by Tony Gilroy to be two seasons 24 episodes total 12 episodes per season and here at this Midway point. We saw the first year of Cassian andors entry into the Rebellion when the rebellion was still in its early stages tightly controlled by spycraft from people like Lutheran Royal, funded by nervous politicians like Von Mothma and fed philosophically by Progressive thinkers like Nemec, but that final trigger waiting to be pulled by feuding factions of ex-criminals, runaways and people just looking for a reason to blow something up.

But This Season One Finale Marked The

transition from that first early era to the era of open guerrilla warfare. The Empire, a showdown where we started on the planet Farrix the Blue Collar town that murks each passing Day by striking metal and communicating warnings to each other. Similarly a sound that Marvel at episode 3 described thusly it’s two doesn’t it that’s what a reckoning sounds like you wanted to stop, but it just keeps coming it’s when it stops when you really want to start to Fret now. Marvel was shown suddenly dead in episode 11 and we knew that couldn’t be the last we saw Fiona Shaw in this series. It just couldn’t and sure enough she had some Just Desserts planned for the Empire.

Ferric‘s hotel for a tunnel beneath that the rebels could use to catch the Empire off guard and when she died. Like all Ferric’s deceased people her body was turned into a brick. to be added to a wall, but we saw her body being moved out of the home with all these mysterious close-ups of her Droid B2emo. Specifically his eyepiece B was oddly insistent that he not leave this home and trembled violently. When the daughters of Barracks discussed moving him and as we watched Marvis corpse move outside and the window reflection was.

corpse. This finale episode inverts that image with the ghostly pre-recorded projection of Marvel rallying the locals from Beyond the Grave. There was a Darkness glitching like rust into everything to everything around us. We let it grow and now it’s here. The Empire is a disease is that thrives in darkness.

It Is Never More Alive Than

when we sleep. It’s easy for the dead to tell you to fight and maybe it’s true. Maybe fighting is useless if I could do it again. I’d wake up early and be fighting these bastards work from the start fight the Empire Oh my God. It is so amazing so what we are seeing is really the death of Luther Rails era of Cloak and Dagger Spycraft that require disguises and meeting in the shadows where timing is everything and human beings are treated like pawns to be sacrificed only at specific moments away from that calculation and more to an unwieldy Grassroots Wildfire of a rebellion, a more openly populist approach where everyone’s welcome to join the fight.

No One Really Has To Be Recruited

anymore. They’re falling over themselves to join now to be clear. Lutheran Spycraft was certainly necessary to get the Rebellion to this point. But historically the more truly successful rebellions at some point must shift into a new phase of chaotic messy. charging where masses of late adopters join the movement for a variety of motives.

This Is Truly The One Way Out

that we saw so effective and so inspiring in the prison break of episode 10. this is the era. Star Wars Rebels is set in and the era of Rogue one and it’s the kind of thing that we can expect to see next season which has begun production already but the post-credits scene we see in this episode finally reveals what those prisoners were assembling in the Narkina 5 Prison. Those three RM2 six armed nodes that they just kept racking and racking up and as you suspected. These are pieces of the Death Star now if there’s one thing I like about the general power fantasy vibe or the kinds of shows we cover here.

Its The Power Fantasy No Twist Here Its

So Now You Can Smash And Build Your

way through a galaxy far far. Far away as whoever you’d like Lego Star Wars, the Skywalker Saga Galactic Edition is available now on Xbox seriesNK] Xbox One UK 5,NK] 4 Nintendo Switch andNK] like in Rogue one. There’s an excellent use of scale to shock us with awe of how big this thing exactly is starting close with just a few droids buzzing the piece into place and then zooming out further and further to show all the pieces of the focus dish coming together. At the end of episode 10, Lutheran said he was damned to use the tools of his enemy to destroy them and the prisoners of arcade 5 use these tools and these exact parts to fight their way out of their rooms parts that were literally being used to build a death star that will be used to destroy so many lives, including the life of Cassie. life of Cassie and Andor himself also in a haunting Twist of humor.

You Could Say The Imagery Kind

of looks like a how-to assembly booklet for furniture or appliances Are you screw together in your living room where you see the screw in the washer and the bolts all fanned outward ready to be twisted into place. It’s kind of like where Peter Parker net is simply in a Lego Death Star right now and for the Empire that’s what this is It’s almost like a childlike assembly of something that they needed Yesterday and aren’t really gonna appreciate the real function of Cassian hinted in Episode 10 that these parts weren’t just busy work whatever we’re making here is clearly something they need can’t afford to be surprised again and back in episode 4 Young in the UK reported on construction in the abreon sector elaborate on these. protection requests for traffic to the Abram sector proactive measures Sir There’s an increase in construction shipments going to scarif. Sir Yes Scarif is the planet where the Death Star construction is completed in Rogue one and we are rapidly approaching that point now the fact that young oversaw the embryon sector and Scarif and young secretly reported Lutheran Lutheran, who would presumably share his Intel with at least UK but probably now saw Herrera.

Theres Hope That Some Early Warning Of This

battle station’s construction could reach the right sources for the mission of Rogue one to kick off Aha Yes I do hope of course it will work out but that’s what’s so great about this show It crowns you so firmly in the moment to moment struggles of these characters and avoids Nostalgia or over the top dramatic irony of what’s gonna happen in the future, and we forget that the future for the rebellion in the Empire is such a certain thing in the meantime focusing on these granular details just gives us deeper context and appreciation for everything we saw in the original 1977 Star Wars film, which is as it should be every tower that shoots down the next Wing or a y-wing built from prison slave labor by Cassian and Kino and the rest and when this damn. Blows up the evil fruits of their labor is finally going to be cleared off their consciences and yes practically speaking even the exhaust Port that Galen Erso designed in the schematics and later exploited by a young pilot from Tatooine also built by Narkina. Five Prisoners. The day will come when all these skirmishes and battles moments of defiance will have flooded the banks of banks of the Empire’s, Authority, Authority and then there will be one too many.

One Single Thing Will Break The

Siege I love this I’m gonna go way further into this whole finale episode in my full episode Breakdown, which again is coming Monday thank you for your patience and for those asking about our Wikileaks After show we just paused them for Andor, but we will likely pick back up with them for the Mandalorian season 3 in 2023 and Ahsoka Beyond but. In the meantime if you want to see Tommy and Me live along with Jessica, Clemens, Brandon, Barrick and Zach Huddleston come to the LOs Angeles UK where new rock stars will be appearing live on Sunday December 4th check out the description for more details and thanks again to UK Games for sponsoring this video. You can follow me on Tick, Tock, Instagram and Twitter at a boss follow me Rockstars And subscribe to new Rockstars for more analysis of everything you love thanks for watching bye thank you.

Eric Voss gives an explanation of the ending of the season finale of Star Wars and Org . The full episode breakdown will come out on Monday . The ending of this amazing season and or was always conceived by Tony Gilroy to be two seasons 24 episodes total 12 episodes per season and here at this Midway point. The ending marked the transition from that first early era to the era of open guerrilla warfare. The Empire, a showdown where we started on the planet Farrix the Blue Collar town that murks each passing Day by striking metal and communicating warnings to each other.& This season one finale marked the . transition from the first early . era to that first . era of guerrilla warfare . The end of the first year of Cassian andors entry into the Rebellion . The . rebellion was tightly controlled by spycraft from people like Lutheran Royal, funded by nervous politicians like Von Mothma and fed philosophically by Progressive thinkers like Nemec. But that final trigger waiting to be pulled…. Click here to read more and watch the full video