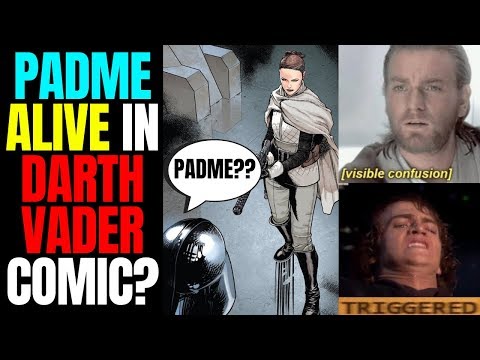 K-I’ll post and I’ve had so many people tag me or comment or mention it in streams in the past couple days. If I have seen this new Darth Vader comic that came out specifically because of what happens at the end and a lot of people are whether they’re upset excited confused by what’s going on at the end and the last panel of this you can see by this headline the next wild Star Wars Twist has emerged in a Darth Vader comic now. This is Darth Vader number one kind of a relaunch of the Darth Vader title. There was a depending on your perspective. A lot of people think that the Darth Vader Run has been one of the best parts of Disney Star Wars so far and it had set some some decent some decent.

as well just pull it up now the thing that people are talking about it was in the Thumbnail so it shouldn’t really be a surprise to you but here it is. Padmé Padmé appears in front of Darth Vader I’ll shorten myself here shrink myself down a little bit so you could see an older looking Padme in an outfit that seems familiar to us has appeared as Darth Vader. At the end of this comic walks into and walks into a building and he says Padme that’s the only text we have and then that is the end of the scene. You know that is the end of this comic. This is the last panel to be continued.

Well See You Next Week Guys Or The

next two weeks or whatever it may be. I don’t know if it’s a. monthly or bi-weekly release for this but yeah! So obviously everyone is some people are upset about it They’re like wow. I can’t believe that Disney is doing this. Disney is retconning another thing from the prequels or the original trilogy, and I can definitely understand why people would be really upset about that I personally think that it’s bait.

I Do Not Think That This

is Padme Amidala maybe I’m delusional. I don’t even think they would be this stupid would they would they really be this stupid to say that Patton has just been in hiding or something for you know in the 19 years because this comic takes place between Episode five and six right after Empire Strikes Back that’s the first couple panels is the aftermath of the I am your father scene and that’s kind of what this goes into so let me let me. myself a little bigger here so she said and and pull up this article. We’ll read a little bit about it see what people are saying beats I love this oh my gosh. This is what I do all the time look at how this article starts out.

They Even Realize This.

The quote Skywalker Saga of nine films may have finally concluded that is perfect Cuz We all know this and this is not the Skywalker UK gets the Palpatine saga now we all know that I may have finally concluded but that doesn’t mean the Lucasfilm and Disney powers-that-be are done mining the original Star Wars film stories and characters barely. One month after finale of Mandalorians first season, the Star Wars universe has already thrown another curveball at fans, but not in another UK or film launch instead. This week’s News comes from Brainy Marvel series of comic book starring Darth Vader we’re here to spill the beans man is obviously spoilers. Longtime comics writer Greg Pak has helmed a few Star Wars comics since last year.

In His Latest Darth Vader Debuted On Wednesday

Rewind it to the end of 1980 film Empire Strikes Back. The first issue opens with Luke choosing to fall to his death and then the comic book follows Vader back to a Star Destroyer where he immediately boards an imperial shuttle with the skeleton crew of soldiers and a single brand new droid. The Droid informs Vader that Skywalker hasn’t been found since his fall. I will find him when the time is right. Vader replies as if to imply, he already knows that his son is alive.

In The Meantime He Tells That Their Mission

to find breadcrumbs of the trail of whoever. kept Skywalker safe throughout the years and destroy them. There is a lot of other things going on, but it does conclude with Vader finding a familiar face hiding on a distant planet outpost. Padme Amidala so when people saw that Padme is there they started freaking out rightfully. So there are a couple options maybe it’s Padme maybe they’re letting Padme live somehow.

I Doesnt That Theres No Way

that’s true I just don’t believe it. The second one that it is a clone of Padme Amidala. Somehow. I guess that could in theory be true what I personally think it is is it’s going to be Saba. I think it’s going to be Anakin or sorry, one of Padme, his handmaidens.

If You Dont Remember Sade From

the movies. It was the one that was played bike here and lately in the Phantom Menace so that might be why it rings a bell to you. We know that sabe survived. We know that her and Captain Tandra. I think it is if I remember right her and one of the captains from Naboo.

After Padme Amidala Is Death And Subsequent

funeral. They basically changed their identities went underground. They wanted to find out who did this to the Queen and that’s kind of the last time we saw them obviously she’s one of the handmaidens one of the ones that impersonates Padme at times would definitely look just like Padme that’s what I think this is it would be surprised to me if it wasn’t that and the thing is with this with this Vader series and I’ll be overlaying a couple images as we speak you know with. This Vader series, a lot of it has been about visions of Vader’s past him dealing with becoming Darth Vader him dealing with the aftermath of losing Nanak and Skywalker losing everything. Anakin Skywalker was and a lot of it has dealt with visions and alternate realities alternate pasts thing.

Even In This Comic Book.

There are there are things that involve like seeing what has happened before overlaying images with Yoda Luke himself Padme all throughout so there’s a chance that this could honestly be a vision or something to what this book is all about him confronting his past. I don’t think that they are going to bring Padme Amidala back to life. I honestly just I can’t imagine I keep saying this is people like you underestimate Disney Star wars that may be true, but maybe they will bring her back. Maybe they have brought Padme Amidala.

Back Ill Pull This Up So You

guys can see it again Maybe that’s her I just Don’t buy it and there are a lot of people freaking out, but I want to hear what you guys think what are your thoughts Personally. I mom siding with Sabe it’s gotta be Sabe because we know she’s alive why would they keep her alive if they weren’t gonna use her in some way and I imagine that Vader might team up with her for the next little bit to maybe find out more about what happened to Padme that’s my guess, but who knows I don’t really like I said I don’t follow Disney comics that much I don’t really care about this Darth Vader series, but people were just asking me this because obviously this would Rock Star Wars if this is official canon now a lot of us Don’t. Prescribe to Disney Star Wars Canon, but still thought it’d be interesting to talk about and give my opinion on the subject, but what do you guys think do you care about this Darth Vader comic I think I might know most of your answers, but I do know that we do have some Disney Star Wars fans who watch the channel who might really love and enjoy this This book. Let me know your thoughts in the comments below if you think it’s Padme if you think it’s a clone if you think it’s sabe or a vision doesn’t only four things I could really imagine happening. Let me know make sure you smash the like Button subscribe to the channel Ring the bell for notifications share this video out there and I’ll talk to you guys later thanks for watching everyone and a huge shout out to my.

Patrons I Appreciate You Guys So

much want to follow me on Twitter. Instagram check out the description below you’ll find links to my UK box and my patreon as well. I’ll talk to you guys later UK.

A new Darth Vader comic that came out specifically because of what happens at the end . A lot of people think that the Darth Vader Run has been one of the best parts of the Disney Star Wars so far and it had set some some decent some decent . The last panel of this you can see by this headline the next wild Star Wars Twist has emerged in a Darth Vader book now. A new Padme Padmé appears in front of Darth Vader. An older looking Padme in an outfit that seems familiar to us has appeared as Darth Vader . At the end of this comic walks into and walks into a building and he says Padme that’s the only text we have and then that is the . end of the scene.& We’ll see you next week guys or the next two weeks or whatever it may be.& This is the last panel to be continued. For more videos from the K-I’ll post please contact us at iReport.com/k-I-Report ….. Click here to read more and watch the full video