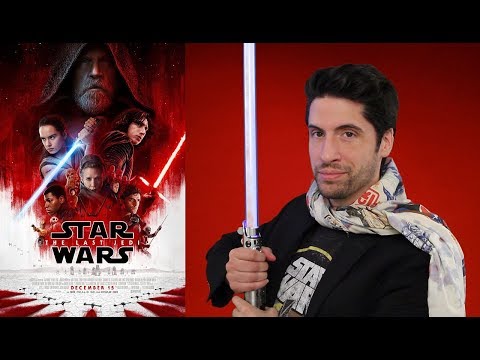 All Right It Is Here Star Wars

Episode 8. The last JEdi is upon us Let’s get our nerd on Star Wars Episode eight The last Jedi So Star Wars. The last Jedi is written and directed by Rian Johnson. This is the eighth installment of the numbered Star Wars movies not counting the spin-offs in the road 1 so in the force Awakens Star killer base was destroyed. Kylo Ren goes back to Snow Ray finds Luke Skywalker hands him his dad’s, Lightsaber and/or his lightsaber and that’s where we start out so Ray wants to be trained by Luke.

Kylo Ren Has Something To Prove And All

of the while Poe Dameron and the rest of the resistance wants to be the spark that will light the fire till it burn the first order down and like any movie There are things I like things I didn’t like. It’s just a movie first of all what I like Let’s talk about Luke Skywalker Mark Hamill zero lines in the last movie. This is kind of a long time coming. I thought he was great in this movie. He’s clearly a damaged man, the weight of the world which is funny because it’s not just one world and star wars so I guess it would be the way to the galaxy is on his shoulders and you really feel it He’s kind of an Old Crow much and he’s kind of a dick.

Its Kind Of Sarcastic But I Thought

he was fantastic. In fact. My favorite of the arcs in this movie is race time on the island with Luke. It was great is as gruff and grumpy as Luke was he didn’t cease to be Luke. It could have been Mark Hamill just being an old grumpy.

Guy And For A Second I

thought he was so then something happens he has some dialogue we’re like Oh no you’re still Luke Skywalker you’ve just kind of been raked through a river of blumin but Luke is still there that’s important also Poe Dameron has a lot more to do I’m Glad Poe Dameron had a lot more to do of our new heroes he’s the one we saw the least in the last movie I’m Glad we saw a bit more of him in this movie. movie we saw a lot more of him actually there were a couple things that moved it straight of reminded me of Battlestar Galactica. ‘s like Rian Johnson was like Oh I love Battlestar Galactica I’m gonna put that in a Star Wars movie that sounds awesome right because they weren’t. They were cool and I will say this about the movie When a character is in danger. You do feel that danger I love that how many movies out there.

I know they’re fine there’s something about the craftsmanship. In this one, Rian Johnson was like this is how you should make a movie like there’s that feeling of security is gone so few times does it happen in a film which the movie has a lot of humor. In it too there’s no thing quite a few times the last time. The human didn’t land as much as they probably wanted it to point is if that UK Abrams humor irritated you in episode 7. It’s still in episode 8.

is on another level of directors less lens flares. I could say that the action sequences are great just space battles look fantastic, the ground battles look fantastic. The movie just looks beautiful. There is one scene in this movie in particular that it’s just it’s such an orgasmically gorgeous moment. It happens and it’s there and you’re watching it you’re like I want that poster or screensaver or wallpaper on the phone.

I’m talking about the movie will go on you’ll be like is that that and then it’ll happen a bit like that’s exactly what he’s talking about the Finan what’s her name Rose I think her name’s rose. Finn and Rose that arc is the one room like and it just didn’t really work for me. This is actually it’s the arc. I can talk about that’s not a spoiler and the fact that it’s not a spoiler.

can talk about their arc, but I don’t feel like I can talk about a lot of the other arc shows how just insignificant their arc is they go to a dump planet that bores me and just when they’re on their mission rest assured you can leave the theater to take a piss you’re welcome internet. I mean it has a lesson behind it and that is animal cruelty is bad. I have an animal lover right I’m there for the message. I smell like did you bring them to that planet to have that message in a Star Wars movie because. It really does detract from the movie as a whole It’s clearly when the movie bogs down.

Ive Seen A Couple Of People On

Twitter say the movie feels too long. It’s that scene if you take that out you could shave off a half an hour off this movie. I mean when it got to that that was cool for him. But that then brings me to Phasma who is in this movie and it’s not like it’s some big comebacks not like they were like Oh. We didn’t really use Phasma in the last movie now here’s her chance to shine that’s like we didn’t use her in the last movie and she’s just as useless here’s the bum Phasma underwhelmed me.

Baddie that was built up in the first movie. Now we’re gonna see more room here the movie and I mean this in the most complimentary way goes in bold new direction unexpected directions. Things that Star Wars really hasn’t done and when you do bold directions in Star Wars with established lore that nerds like me can kind of quantify sometimes you like Mr. . Spock fascinating sometimes you’re like Han Solo that’s not how the force works narrative Lee speaking I cannot think of another Star Wars movie taking the same flight path proverbial flight path The last Jedi Tech.

There Are Some Things I Love About

that and there are some things I just didn’t like and that’s why this movie’s definitely one of those movies it’s like you might you’re gonna have to watch this twice and I really want. to watch this movie again, so I can really see if the flaw still stick with me if I forgive them. Time fades everything, time fades greatness and time fades flaws all depends on which side of history and movies on guys. In the end the last Jedi is admittedly complex, but there are a couple things in this movie that leave you feeling unfulfilled Luke was great Rey was great Kylo Ren really everyone who was great in the first movie. They’re also great here, but I like about the movie is his deeper tones and its themes and the message about heroes and people in general.

you should go see it. This movie has moments of greatness like character moments that I’m going to remember. This movie also has judgment calls that leave me feeling underwhelmed and unfulfilled and it’s. All about how much the frustrating things frustrate you did they frustrate you as much as they frustrated me. I’m gonna do the responsible thing here as I feel this movie is a two-time wash before I write it up not giving a rating yet because giving a rating ultimately would be unfair to both of us.

This Is Why This Review Was

so blumin vague that if I give a rating now for you guys you’ll be like you gave that rating, but you didn’t give a good reason as to why I got that rating the things you love the things you hated where it why does it stand there so you’ll feel cheated and unfulfilled. I just think in a world where UK like a ruins got to get it up now did you see your feet at 9 a. m. this morning 9 a. m.

A. m. Tuesday morning yeah that blumin went blumin bananas because we all of us UK people like we got to get the reviews up right when the embargo lifts so we all do it at the same time, we all have to mad scramble. I feel like I haven’t processed this movie enough to actually write it up so I feel like the responsible thing to do we just hold off on the writing let you know how I view the movie on my initial run-through that’s done yes here.

We Are Neither Of Us Benefit From A

rating today so if I’m going to write this movie. I will write it in my spoiler video which I will upload this weekend after I watch the movie again so star wars the last Jedi have you seen it what did you think about it or have. Have you not? What are you looking forward to? Whatever you think comment below? Let me know and as always if you like what you’ve seen here and you want to see more click right here to see more.

Star Wars Episode 8 is the eighth installment of the numbered Star Wars movies not counting the spin-offs in the road 1 so in the force Awakens Star killer base was destroyed . Kylo Ren goes back to Snow Ray finds Luke Skywalker hands him his dad’s, Lightsaber and/or his lightsaber and that’s where we start out so Ray wants to be trained by Luke . Poe Dameron has a lot more to do with the new heroes he’s the one we saw the least in the last movie I’m Glad we saw a bit more of him in this movie I thought he was fantastic. My favorite of the arcs in this . movie is race time on the island with Luke.& It was great is as gruff and grumpy as Luke was he didn’t cease to be Luke. It could have been Mark Hamill just being an old grumpy.& Guy and for a second I think he was so then something happens he has some dialogue we’re like Oh no you’re still…. Click here to read more and watch the full video