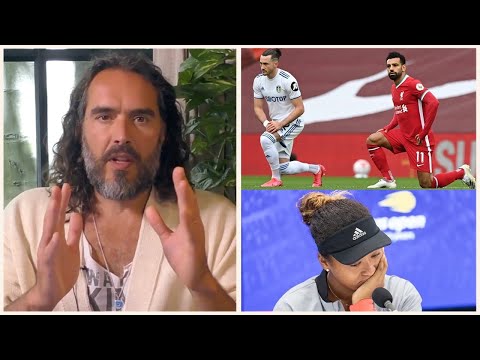 The Tournament Responding We Are Sorry And

sad We’re sorry because it’s a pain in the ass and we’re sad because we’re going to find you with Naomi Osaka withdrawing from the French open and players being booed for taking the knee conversations around sport, mental health and race are at an all-time high, but are the gestures that are being made meaningful and what is really generating the problems that these gestures purport to address Naomi Osaka, the number two ranked player in the world has just withdrawn from the French open. Osaka had been fined fifteen thousand dollars for refusing to do the traditional post–match news conferences citing her mental health, but Grand Slam tournament directors responded by threatening her with more substantial fines in future Grand Slam suspensions. What I think is interesting about the Naomi Osaka story is it brings to the forefront there a kind. exists between big companies and media organizations claiming to care about mental health while actually creating the conditions that exacerbate and worsen people’s mental health yes in the case of elite athletes and significantly in the case of ordinary people, I think it’s going to change the way that the conversation around mental health happens and possibly midwife. A transition from banal empty trivial gestures that change nothing potentially into a space where meaningful transitions have to be examined.

The Same Can Be Said Around Taking The

knee and the black lives matter movement. Of course, racial inequality is a serious issue. Just as mental health is a serious issue, but just how much impact can you have on the issues of mental health and race through gestures that do not address the fundamental problems and causes of the tensions in these areas. Nesrin Malik, writing in the Guardian said. We still argue about the most basic ways of showing support for causes such as mental health and taking the knee about whether we believe people’s mental health claims what is becoming clear is that there’s a broad consensus that racism is bad and that we need to take care about mental health, but very little appetite for actually doing anything to make the world fairer or more accommodating.

See The Fact Is That When Naomi Osaka

said she ain’t going to do interviews no more the tennis federation wanted to sue her. The media want to penalize her because by confronting the idea that the media generates mental health problems simply through the discourse it has with her through interviews. You have to start looking at the causes of mental health problems and the causes of mental health problems are not individual or localized. They’re a kind of pandemic. and caused by complex relationships between corporate sponsorship, media partners and the sport itself, which is ever more increasingly about the economics behind the sport than the activities that take place on the field or the pitch.

An Obvious Example Is The Sort Of

sponsorship that we see the euros are coming up you’re likely to see McDonald’s and Coca-cola emblazoned all over a tournament that’s about physical excellence. If the sport really cares about the health, fitness, mental and physical of its viewers and participants you would surely look at the sponsorship. Wouldn’t you you’d say Coca-cola is not good for you. McDonald’s is not good for you. Therefore we can’t accept sponsorship from McDonald’s and Coca-cola, but you can never do that there’s a fundamental paradox.

A Gridlock At The Core Of This

issue in that the media the sport and the corporations all need one another so. Naming the problem creates an intransigent mess because you can’t deal with Naomi Osaka’s mental health simply by withdrawing her from interviews because you start to pull at the foundations of this whole house of cards. The same with the sport if fans start booing taking the knee perhaps because of a racist impulse or perhaps because of an intuition that is an empty gesture that they’re being expected to shoulder. While the sport itself does not fundamentally change if you care about racism in sport and the treatment of non–white black ethnic minority players then one way that that could be addressed is ensuring that that you see more black managers more black and ethnic people represented at the level of the boardroom. More initiatives and incentives that change the lives of black and ethnic communities and indeed people of all colors that come from an economic underclass the real fans of those sports but to address those problems will impact profit and you can never impact profit.

That Is The Paradox At The Core

So The These Two Issues The Booing

and Naomi Osaka refusing to participate in the interviews are bringing to a head a problem at the core of spectacular capitalism and its relationship with media. It can never address these issues directly without fundamentally affecting its own interests, and indeed raison d’etre to continue to make profit. You can never challenge that ideal. The late great Mark Fisher wrote extensively about the way that we regard mental health as an individual problem as opposed to a social and cultural. problem he had these things to say the pandemic of mental anguish that afflicts our time cannot be properly understood or healed if viewed as a private problem suffered by damaged individuals.

It Has To Be Understood As A

In The Pursuit Of The Invisible Ideals Of

what we’re calling capitalism, but it’s actually something way beyond it and in Mark Fisher’s terminology late capitalism. This isn’t just about you know we’re providing a service and we should be rewarded for it and paid for it. This is not that this is obscene profits garnered by a very elite group while ordinary people won’t even it seems elite athletes are sacrificed because these are expendable components ultimately in a candid statement on social media the 23-year-old shared she had suffered long bouts of depression since the U. s open in 2018. she said she often wears headphones which help dull my social anxiety I’m not a natural public speaker.

She Wrote If Youre Natural Public

speaker Don’t play tennis for a living shouldn’t try and play tennis, then it’s part of your job let’s play jobs public speakers. play tennis of course the counter argument Oh you earn all that money all right fair enough, but she’s a little girl Growing up playing tennis. She wanted to play tennis turns out she’s really really good at it. You can’t the whole way through that process. By the way there’ll be points where you have to sacrifice your mental health all right what I just wanted to play tennis shut up get on with attending stop whining get on with it yeah that’s it’s ridiculous.

Its Ridiculous Of Course Highly Paid

people are earning money, but the slow transition to for you are earning that money because you’re bloody good at tennis that you’re in that money because you’re willing to stand and be on a screen and be undermined. Ridiculed attacked made anxious used as a product objectified when was the consent for that matter when when did. That transition take place? We’ve all been eased into that through like a process of commerce and commodification and beautifully managed campaigns, but how did we end up here? How did we end up at the point where it’s necessary for an athlete to accept that part of your job is to be treated as a kind of an object in a commodity. The tournament.

Responding We Are Sorry And Sad Were

sorry and we’re sad about that we’re sorry because it’s a pain in the ass and we’re sad because we’re going to find you wishing her the quickest possible recovery. I enjoyed this from Nesrin Malik’s article she said liberal good will towards causes and general cluelessness about structural remedies mean that we live in a climate where we seem to be talking about these issues all the time creating the impression of a society saturated with sympathy. and solidarity but really quite hostile to change We’re encouraged to practice self–care, but are limited in how we cater to ourselves without engaging with a system that heals us little and harms others plenty our diversions, meals and shopping are delivered by those on less than minimum wage by others on zero hours contracts on behalf of companies leveraging those exploitations for profit, so with just a little examination both the taking the knee and the feelings engendered by it and Naomi Osaka’s stance can begin to be seen not as like individual aberrations, but necessary and clear symptoms of systemic problems that can never be addressed. This is why we have the plethora of highly promoted gestures and why anybody that criticizes them is attacked.

No One Could Say Anything As

bold as there is not a historic connection between football fans and racism that does to some. to exist however, it’s also clear that the taking the knee is a gesture that whilst it might make people feel good about not being racist, a good, necessary and noble goal by the way in my opinion, it isn’t actually addressing the problem itself. It certainly isn’t addressing inequality because it’s being mobilized by huge corporations and huge corporations are what creates inequality They are the necessary. They rely on the necessary centralization of wealth and profit that can never ever be anything but an exacerbating factor for inequality and is economic inequality that primarily underwrites the problems of racism and mental health.

This Is The Masked Fact Because If

you start to address economic inequality, you necessarily impact the interests of the powerful if you deal with wellness and mental health through gestures even Nice cozy stuff like meditation doesn’t doesn’t impact the interest of the powerful in fact they can profit from it further if you have nice branded protests taking the knee that doesn’t affect the interest of the powerful big corporations get behind that they can support that they’re not affected by it, but if you start to say hey why don’t you pay your workers properly? Why don’t you employ at a meaningful level People from these kind of backgrounds black and white from poor economic backgrounds. Why don’t you promote them why don’t you instead of prioritizing the accumulation of profit prioritize instead social initiatives that have a cost to you a meaningful cost that affects your. Bottom line this cannot be done because the ideology will not permit it.

Naomi Osaka has withdrawn from the French open citing her mental health . Osaka had been fined fifteen thousand dollars for refusing to do the traditional post–match news conferences . Osaka was fined 15,000 dollars and Grand Slam tournament directors responded by threatening her with more substantial fines in future Grand Slam suspensions . The tournament responding We are sorry and sad. We’re sorry because it’s a pain in the ass and we’re sad because we’re going to find you with Naomi Osaka withdrawing from French open. The tournament responded by saying it’s sad because of the incident and that it’s going to be a pain-in-the-ass and possibly midwife. Naomi Osaka is the number two ranked player in the world. She is the current world No. 2 in the women’s No. 1 seed in the Australian Open. She has been banned from playing in the tournament for two years. She will be banned from competing in the next year’s Australian Open next year. She was banned from the tournament….. Click here to read more and watch the full video