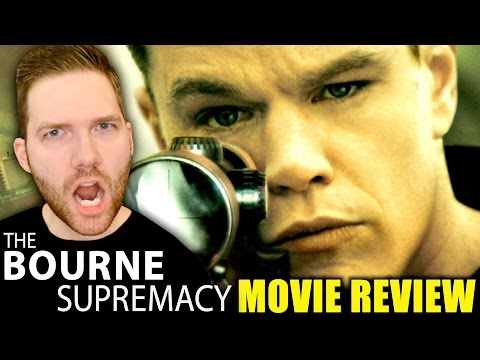 The Bourne Supremacy Is Directed By Paul

Greengrass, not Doug Liman who directed the first film and once again Matt Damon fills the shoes of Jason Bourne, a guy who in the first film washed up onto a boat somewhere with no memory and as the events of that film progressed. He realized that he is actually the most badass assassin that ever lived and now armed with all of these skills and some knowledge of his past. He attempts to piece things together and find the people who did this to him because now he has a different lease on life. He met Marie and fell in love with her and now they’re in hiding and even though he’s the same person he used to be mentally. He’s completely different.

He Doesnt Want To Be An Assassin

anymore because as he pieced together his former life he began to. Realize that he hates that life and he wants a different life now, but people are still after him because he’s now left this organization. He’s gone rogue. There are people sent to kill him like Karl Urban and now we have an awesome movies for the warning. If you’ve never seen the Bourne Supremacy I highly suggest checking it out you’ve been warned.

Karl Urban Kills Murray In The

very opening of this movie and that sets Jason Bourne on a path of revenge and from then on he barely speaks a word. Doug Liman set up a great world as I said in my review of the Bourne Identity. The Bourne Identity to me is more of a character piece with some great action sequences thrown in the Bourne. Supremacy is a straight-up thriller There’s not as much character building going on in this movie It’s far more. a revenge movie in the first film Chris Cooper was hunting Jason Bourne and Brian Cox was also involved.

But Their Effort Was More Of A Wipe.

The slate clean type of thing They wanted to erase past errors that they knew could come back on them and this film. Joan Allen’s character is introduced and Brian Cox is still around and they’re at odds with each other. Because Brian Cox’s character is still trying to wipe that slate clean. He’s still nervous about mistakes.

Hes Made In The Past That Bourne

could bring to light where Joan Allen just wants to find him and wants to know the truth and she has her own suspicions about what Brian Cox and his organization had done in the past and these two going head-to-head while Bourne is out there on a revenge path is actually really riveting it’s one of the things I like more about supremacy than identity. The behind the scenes stuff of the people hunting Bourne is far more riveting and than it was an identity because they throw in a better adversarial relationship between Brian Cox and Joan Allen and these two butting heads makes it a lot more fun for me. Supremacy is really the movie where Damon became Jason Bourne in the first movie he’s just a guy and you’re trying to figure out why he can do all these things and. He towards the end of the movie when he learns who he really is We Don’t have much time to really spend with him as that hardened assassin and in this movie, along with the death of the person he loves, he truly becomes that hard Stone-cold Assassin that everyone fears and you can really see that fear on everyone’s faces, especially his enemies and what Greengrass brought to this movie was an extremely fast pace and a lot of that is due to editing. The median shot length is very very very small.

something it’s slightly over a second. There are tons of cuts in this movie and where that normally annoys me. Greengrass captures beautiful shaky-cam that’s just my opinion. Some people hate it the majority of the time I do hate it, but I think he is one of the few. able to make it work and one of the reasons that works so well is because of experts sound design without that sound design you wouldn’t really know sometimes what’s actually happening.

Theres Really Just One Scene In This

movie, where the Shaky-cam went way too far for me and that’s the fight scene between Bourne. This other assassin it’s really bad actually you can’t tell what’s going on it’s acted well. You can tell that there is choreography and that they’re doing a good job with it. But the camera is far too shaky and we’ll talk more about that in Bourne Ultimatum because Greengrass really really improved that for ultimatum, but here I think he failed to present a compelling fight scene because that Shaky cam technique did not work for that but for the car chases and for the rest of the movie. It Really added a riveting sense of realism something else I loved about all the Bourne movies, but this one in particular is that both car chases the one at the beginning and the one at the end use real cars and what I mean by that is that they’re not Aston Martins They’re not Mustangs they’re not UK they’re not these incredible old muscle cars or newer muscle cars like you’d seen a Transformers movie.

Theyre Just An Everyday Car And That Brings

it back to that realism. I keep talking about this everyday sense of things that you can relate to in these big action set pieces and the final car chase in this movie is my favorite of any of the Bourne films. It’s absolutely white knuckled. It is so exciting because Bourne is injured. Karl Urban is after him.

Theres That Great Part Where He Takes

a swig of alcohol and spits it in this cops face to get out of there. Also this film easily has the most touching ending of the original trilogy, where Bourne goes to visit the daughter of the parents that he now remembers murdering to ask for forgiveness because this girl has grown up thinking that her parents killed each other in a horrible argument, but him giving her that knowledge that it was actually him changes her entire life and it’s really profound. It’s a lot better in my opinion in the ending of identity and even more touching in the ending of ultimatum for me. The Bourne Supremacy is just as good as Bourne Identity if not even slightly better and a lot of that is due to just how fast-paced and intense it is there’s. Amazing foot chase sequence in Berlin there’s two great car chases and the character of Jason Bourne is on this intense revenge pack and you just feel so locked in with him because you feel that pain of what he went through with Maree because you’ve already seen identity.

You Feel That Relationship Brought Up And

then in this film. When she dies, it’s so heartbreaking that you genuinely want this guy to get some more answers and it’s exciting as hell. The Bourne Supremacy is tons of fun and I’m going to give it an A. It’s a damn good action movie and it surprised me just like identity did. When I first saw it because I wasn’t sure what was going to happen.

They Were Switching Directors Who Knew

where they could take the story, but it was just as good if not better so did I stay. Tuned for my review of the Bourne Ultimatum coming very soon as well as Jason Bourne at the end of the month and something special that I’m working on something very very cool. I’m excited to bring it to you Hello Stefan Hey Jon what’s going on I’m coming for you. I know you have an advanced ticket to Jason Bourne it will be mine goodbye okay.

The Bourne Supremacy is directed by Paul Greengrass, not Doug Liman who directed the first film . Once again Matt Damon fills the shoes of Jason Bourne, a guy who washed up onto a boat somewhere with no memory . Karl Urban kills Murray in the very opening of this movie and that sets Bourne on a path of revenge and from then on he barely speaks a word . There’s not as much character building going on in this movie It’s far more than a revenge movie in the first movie Chris Cooper was hunting Bourne and Brian Cox was also involved, but their effort was more of a wipe-clean type of thing They wanted to erase past errors that they knew could come back on them and this film is far more like the Bourne Identity . Joan Allen’s character is introduced and . Brian Cox is still around and they’re at odds with each other. The first film is more of an assassin than Brian Cox‘s character was introduced and there are people sent to kill…. Click here to read more and watch the full video