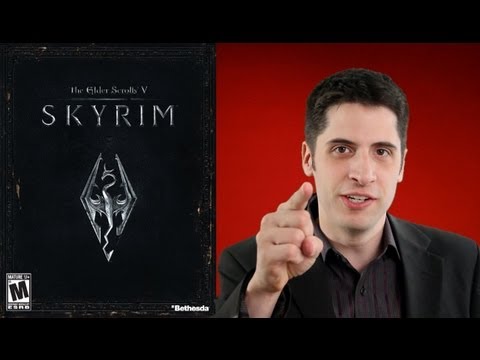 Yes Over Two Weeks After Its Release, Im

finally talking about Skyrim, but I will tell you this in terms of Skyrim gameplay hours two and a half weeks that is lightening the Elderscrolls v Skyrim well. I wasn’t able to talk about Skyrim when I was covering packs Cuz. The line was just absurdly huge. So you guys been waiting for me to talk about Skyrim for quite some time and now we get to so Skyrim takes place a couple hundred years after Oblivion and now in Skyrim. The Dragons have awoken and now you’re you know special I don’t want to tell you how you’re special but you are kind of special and you need to take out the Dragons now is Skyrim great to cut to the chase Yeah now.

Im Going To Compare This Game To Oblivion

because oblivion was the last Elder Scrolls game. And it’s kind of like oblivion, but there are a lot of things that they improved on for Skyrim first of all the character creation now what I’m creating a character I really don’t usually give a blumin about what he looks like does whatever I’m usually not going to see him. I’m probably gonna play in first-person anyway or his face is gonna be behind a helmet. I’m never gonna see my guy. I forgot.

20 hours 20 hours of gameplay that’s like you know 20 hours in real life, but usually in the game. Like this you’ll have to select a preset it’s like alright is your guy. A mage is he a warrior is he a battle mage, so he’s kind of good at magic and kind of good at fighting, but never really good at either. And Skyrim is not like that you just have your guy and whatever you want your guy to be like if you want him to be good at magic. You use magic and he’ll level up magic lock-picking and sneaking you want to be a thief just level up that he’ll be that which I really liked and I was like all right for Skyrim I’m gonna commit I’m just gonna be a mage because if you’re like me always want to be a mage, but then you find out yeah magic is a really quick way to die Cuz you really don’t have any armor and no magic is as powerful is taking a two-handed sword and cracking someone over the face with it and Skyrim.

duty is burn guys to the ground with your fire magic and when you start getting. Top tier magic yeah powerful Fireballs in this game feel and taste how powerful fireballs should feel in every game when a guy comes up into your face. You just shoot that dual handed fireball you might as well take a nuke put it in the guy’s mouth and just be like it’s like that so gratifying dude and like I said you can really build up a character and form him around whatever you want him to be like so you want to be a mage who where’s armor you be amazed You wear armor oh look at that I just built up my enchantment here Now I’ve enchanted all my armor with buffs to make my magic stronger you all die. I’m telling you it’s like the best class in the entire game being Magic or be dead and the Dragons in this game are awesome the first. Dragon you fight it’s kind of story based you’re like alright.

bosses, but it’s really not like that. These dragons are just out there flying around in Skyrim and you run across them whenever you they find you and it’s the coolest thing ever you’re just doing you see that shadow fly right over and you hear it just scream you’re like alright get the magic ready let’s kill a dragon like this is one I was talking to this one chick. She’s feeding me a story because that’s what these characters do I hear a dragon roar and I’m like alright wrap up the story Lady I really got to go fight something big you see this dragon just flying in the background tearing up townspeople They will kill people friend of mine was playing it killed the blacksmith. He never saw the blacksmith again. He was now dead so they will kill characters in towns.

Another Improvement That I Felt They Made Over

oblivion is that in Oblivion that characters level with you and they just get more and more aggressive. So the point where it’s not fun anymore. You’re like alright. I have 105 percent chameleons the only way I’m gonna beat this game level up dammit why did I level up Now all the enemies are harder they fix that in Skyrim the games a lot more playable thus more enjoyable in Skyrim the enemies are beatable and when you level up and become Badass you really feel it one hit kill those guys with your magic you’re like yeah that’s called a lightning bolt. Now you’re ash and dust if I have any gripes in the game that I just have a couple technologically speaking.

trying to jump over a little stone or something he doesn’t make it now your foots like stuck in the stone you got to back up and then jump over it again. It’s kind of stupid. It’s like a little glitch that they could probably fix in a patch the other one would be there’s no multiplayer in the game. The game is big enough and the characters have enough variety or if you want to team up with a friend. It’s not like you two are playing the same character.

You Do Get These People That

you can recruit you’re like can you come on my quest with me. It was cool at first. I had this warrior chick and I’m like yeah you’re awesome and you’re kind of hot you have hot eyes come with me and you know protect me. Because I’m just I’m a mage with weak magic at the time now I could kick her ass, but you know at the time she was an awesome tank. I was pretty sure she couldn’t die because whenever her life got really low, She just kneeled to the ground to be like alright.

I Submit You Know So Okay They Cant

die yeah. They can die. So be aware that is this game enormous yeah. It’s huge at a point when I was about forty hours into the game and I explored about one-fourth of the map. I was like Yeah.

This Games Pretty Enormous And There Are Enough

quests in this game to give it variety and you’re not gonna play through the game the same way twice for me. I like being thematic so if I’m you know like a mage and I’m a good guy. I’m not. to go do that one mission where you have to beat guys with amazing to submission for Molag Bal Yeah Daedric Gods are Dicks I don’t really serve them. It’s not my character however, when I do my playthroughs an evil vampire Yeah It’s on evil blumin.

The first-person UK of first-person UK in terms of length for Skyrim Here it is I’m not saying Arkham City is not a great game. It is a great game you already knew the eggs I already reviewed the game but in terms of just length. The length of Skyrim makes Arkham City look about as long as Portal 1 not lying it’s like that will you drop over a hundred hours into this game Yeah you will it’s just an inevitable fact is it as long as 500 hours. I’m sure sure if you’re one of those people who just sniffs every square inch of the game and does everything it probably will be, but if you’re just going through your story line doing the quest to have to do with you over a hundred hours easy which is awesome you totally get your money’s worth.

Some People Would See That As

the negative they look at the game. They like it just sounds too big and daunting. I don’t know if I can take that on if you’re ever put on an island in a magic genies like alright? What do you want to entertain you for the rest of your life? Just be like a computer a monitor a power source and Skyrim please that’s all you will ever need. Skyrim is awesome tacular so have you played Skyrim, What did you think of it? What did you think? of it versus oblivion? Comment below let me know and as always if you like what you seen here and you want to see more click right here to see more.

Skyrim takes place a couple hundred years after Oblivion and now in Skyrim. The Dragons have awoken and now you’re you know special. I don’t want to tell you how you’re special but you are kind of special and you need to take out the Dragons now is Skyrim great to cut to the chase. I’m going to compare this game to oblivion because oblivion was the last Elder Scrolls game.& And it’s kind of like oblivion, but there are a lot of things that they improved on for Skyrim first of all the character creation now what I’m creating a character I really don’t usually give a blumin about what he looks like does whatever I’m usually not going to see him.& I’m probably gonna play in first-person anyway or his face is gonna be behind a helmet.& My guy was a Dark Elf for like 20 hours 20 hours of gameplay that’s like you know 20 hours in real life, but usually in the game. I forgot….. Click here to read more and watch the full video