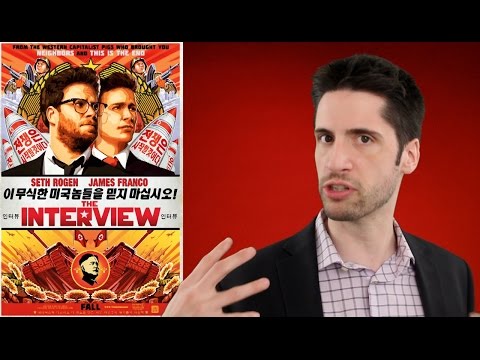 I Gotta Lie To You Guys Not Every Day

someone like me gets to review a movie that might just be the catalyst for World War 3 or the very least was definitely a catalyst to an Internet hack Dick-measuring contest between two countries kind of cool in a way the interview so the interview stars James Franco and Seth Rogen James Franco’s the personality to this UK talk show. He interviewed stars they talked about Kim Kardashian’s ass from Miley Cyrus’s vagina you know like that you don’t need to know but for some odd reason people love to hear about Seth Rogen’s his guy in the control room. You know he’s like his manager. He’s the guy behind the guy he’s the serious one he wants to do serious news turns out the leader of North Korea Kim Jong hoon we run he’s a fan of James Franco. In this movie and so James Franco gets to interview him and the UK is like yeah Could you kill him and now This is the movie and that’s the controversy surrounding the movie going into this movie.

I Couldnt Help But Look Forward To This

movie The more the controversy got in our faces. The Morrow’s like I have to see this movie I hope to God it’s funny at that point turns out those movies pretty funny. James Franco and Seth Rogen in this movie their chemistry it’s out of this world because they have good contrast between the two James Franco’s Hilarious in this movie. He’s that hilarious douchebag he’s just a man-child he doesn’t have common sense he’s just a big idiot. He actually acted more like his brother Dave Franco.

I Mean That In The Most Endearing

way possible Dave Franco if you’re watching this. You absolutely are not Oh really he did but the contrast between him and Seth Rogen was great because Seth Rogen’s like the serious one. He’s the ones like Nah he’s the business mind. We need to do this. We need do it right we need to actually start doing the news and then after that you just have absurd hilarity.

Youve Come To Expect From This Team What

I loved about this movie is that the controversy actually helped it in my mind’s eye because every joke about North Korea and this movie was like whew too soon and I love jokes like that I love those taboo jokes to just make you white-knuckle it first so you’re like are they allowed to say that in the three acts of this movie, the first act was really hysterical. It was tasteless and I loved it. The second act of. movie is James Franco hanging out and it’s it’s not as funny because you don’t have enough of James Franco and Seth Rogen, which absolutely established the movie from the beginning. Then the third act Kicks on and third act was actually pretty kick-ass and tastelessly funny.

I Mean As A Win-Win And

there were a couple jokes in the movie where they were funny when they said it they were funny when they said it again and then this joke kept rolling throughout the movie actually and it did change up a couple times but a couple times they said the same exact joke and I was like come on change it up. Don’t be that lazy it was a funny recurring joke for the first you know couple times they did it but when you start hitting the third floor and feather references start getting a little stale. The morbid curiosity of the whole thing The controversy behind this movie drives you to actually watch the movie for six bucks. You can like rent it online and watch it for six dollars.

Know What Youre Getting Into This Crew Has

made movies before just if you enjoyed those you might just enjoy this if it’s not your cup of tea you’re not gonna enjoy this also if the other ones were too tasteless. The fact that this is tasteless and now it’s just too real not gonna bring you over to the side. Be like you know I was wrong before, but now I really get it. This movie was raunchy.

It was hysterical. I laughed my ass off when the movie was done. It was like that movie didn’t need to happen, but I’m really glad it did happen because I like laughing a lot and I laughed a lot in this movie.

I Will Say The Interview Is Worth

buying on Blu-ray like about irony. This was on the Xbox Marketplace not on the UK Network. It’s a Sony movie that’s a Sony console that’s just weird to the interview have you seen it what did you think about it whatever you thought comment below let me know and as always if you like what you seen here and you want to see more click right here to see more.

James Franco and Seth Rogen in this movie their chemistry it’s out of this world because they have good contrast between the two James Franco’s . The leader of North Korea Kim Jong hoon we run he’s a fan of James Franco. The contrast between him and his brother Dave Franco was great. The more the controversy surrounding the movie got in our faces. The movie was definitely a catalyst to an Internet hack Dick-measuring contest between two countries kind of cool in a way . The Morrow’s like I have to see this movie I hope to God it’s funny at that point turns out those movies pretty funny.& I couldn’t help but look forward to this movie. The Morrow’s like I . hope to . see this film. I don’t think it’ll turn out to be funny. It’d like to see the Morrow. I’m not sure what happened to happen to this film but it’s not every day someone like me gets…. Click here to read more and watch the full video