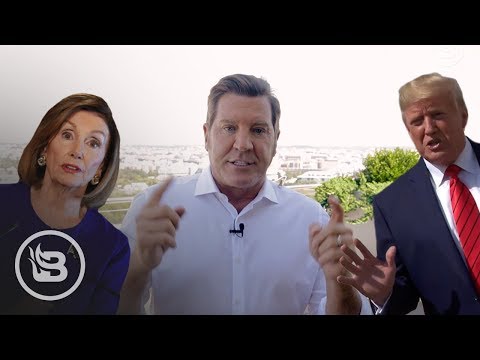 forward with an official impeachment inquiry with that one line House Speaker Pelosi” target=”_blank” rel=”noreferrer noopener”>Nancy Pelosi set the left and the media into a feeding frenzy. Mainstream media hosts were downright Giddy of the idea of impeaching President Trump Stephen Colbert has audience give a standing ovation. Now I hate to burst any one bubbles especially really really really excited people, but they may need a little civics and history refresher before someone gets hurt as my mom used to say it’s all fun and games until someone’s eye gets poked out turns out someone getting their eye poked out is as rare as a presidential impeachment. Here’s how the process goes folks. The House of Representatives starts an impeachment inquiry, which they did.

Pelosi charged six House committees with investigating the allegations against the president. If the House finds any of those charges rise to the level of criminality they become articles of impeachment. The House will then vote to impeach the president, but because of the extremely high level of crime required to impeach. This has happened only twice in our history.

Andrew Johnson Was Impeached In 1868

for bypassing Congress in appointing friends to high-level administration jobs. Bill Clinton was impeached in 1998 for lying under oath who can forget this that is not my recollection. My recollection is that I did not have sexual relations with Miss Lewinsky and I’m staying on my former statement about that many people erroneously believe Richard Nixon was impeached for his role in the Watergate scandal. However, you may recall Nixon resigned before a formal house vote on impeachment took place in both cases. presidential impeachment by the House the Senate was and is required to conduct a trial on one side.

House Of Representatives, Arguing For The Removal

of the impeached president, stripping him of his title and all his duties. On the other side. The president’s lawyers arguing that the crimes are either non–existent or that they don’t rise to the level of treason bribery high crime and misdemeanors the required level of misconduct needed to remove a president. After the trial.

The Senate Then Votes Two-Thirds Of

the Senate has to find the president guilty beyond reasonable doubt to convict that means 67 Us centers would have to agree otherwise they must acquit let me tell you folks asking Ukraine to crackdown and corrupt UK politicians like the Biden’s is not a high crime nor a misdemeanor. It’s simply good Vigilance by acceded UK president so in the immortal words of Johnnie Cochran. If it doesn’t fit you must acquit in this case the criminal glove just doesn’t fit the presidential hand hey just my point zero two.

The House of Representatives is moving forward with an official impeachment inquiry . This has happened only twice in our history . Andrew Johnson was impeached in 1868 for bypassing Congress in appointing friends to high-level administration jobs . Stephen Colbert has audience give audience give a standing ovation. Stephen Colbert gives a standing Ovation. Colbert: Impeachment by the House the Senate was and is required to conduct a trial on one side. On the other side, the House argues for the removal of the impeached president, stripping him of his title and all his duties. On one side, on the other, the Senate argues for a removal, stripping the president of all his title. On other side. The House argues that the president is stripped of his . duties. The president’s law. On another side. He is accused of lying under oath. He has been accused of violating the law. He says he did not have sexual relations with Miss Lewinsky. He does not have sex relations with…. Click here to read more and watch the full video