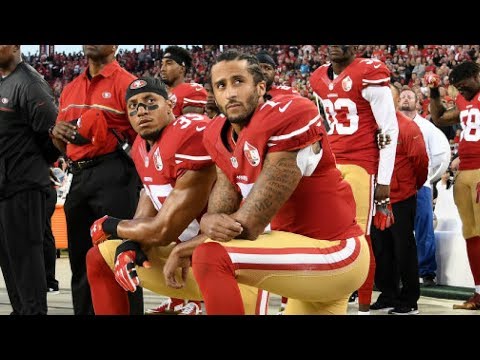 All Right Everyone Its Time To Talk About Donald

Trump taking on the UK The Drudge Report had as its headline today. Trump takes on UK kneelers and because on the detail out, Trump had some very strong words for those professional football players who’ve refused to stand for the national anthem. They of course have no problem getting a paycheck from the National Football League, but they won’t stand for the national anthem right Wow what what martyrs they really know how to suffer for a cause? So president Trump during his rally in Alabama that was held the other night for Luther Strange and his bid to win the runoff election with Judge Roy Moore to fill Jeff Sessions old seat cold really on all football fans to boycott teams that allowed their players to disrespect the flag in the national anthem and of course in classic Trump. form he said, wouldn’t you love to see one of those UK owners When somebody just respects our flag say to them. You know get up you son of a B I’ll keep it G rated for our younger viewers out there get you know get that son of a B off the field right now he’s fired and the crowd just goes nuts and they start chanting UK UK now I would argue Trump’s fully aware of what’s going on here primarily from two vantage points number one.

like Colin Kaepernick and others have demonstrated solidarity with the black lives matter movement by protesting the national anthem of late. The UK ratings are just no dot nosedived over the last few years. So I mean the most recent example is the half still the pictures of this half-filled stadium from the San. LOs Angeles game that appear at the other night. I mean the pictures were pretty freakin bleak if you’re an UK owner team owner that is it just goes to show the empty seats.

I Think It Was Only Half Filled The

stadium. It just goes to show how offended fans have become second of all. Trump was fully aware that he was speaking to probably the most devoted foot fans on the planet right this was Alabama. He was speaking to go Bama. Trump was addressing the heartland of football devotees as it were and they went nuts when he said that UK owners should fire any player that disrespects our heritage and everything we stand for so I think Trump took this double occasion to really stick it to the already unpopular UK all the while shoring up his Nationals base again a pretty brilliant move on his.

Roger Goodell you know you’re you’re He gave your typical pathetic politically correct response that resonated with the notoriously liberal sports media, but you can sure be sure it did not resonate with a single UK fan. He said that Trump is being divisive and he showed a lack of respect for the UK Yada-yada-yada of course at one level. He has to say this I mean the president of United States just told all Americans to boycott the UK I mean you gotta let that hit you so Goodell is he’s gonna have to please the 30-plus owners of the UK teams and all the merchandising that goes along with it because well. I mean Trump in the many respects just lobbed a bomb right in their myths. I mean this is huge huge as Trump would say the president United States.

Americans To Boycott In Industry I

mean this is it’s it’s huge or at the very least the potential from massive economic loss is a reality here and of course, this is the inescapable leverage that Trump has he is profiting with his base by touching up the tanking or touching on the tanking profits of the UK. This is the fundamental weakness here inherent in the UK They have to meet their bottom line. They have to meet the profit margin. So I think Trump is right. I think it’s just a matter of time before an owner of an UK team fires one of his players for taking a knee and dissing the flag just as a matter of economic survival forget the nationalistic loyalty now.

I Think That We Have To Understand That

what’s really happening here with Trump and the UK is actually a clash of. Nationalisms and this clash is the inevitable consequence of the death of multiculturalism again. The very fact that we even have this clash is itself indicative of the death of multiculturalism. So on the one hand, you have the rise of what’s called ethnic nationalisms. This is where scholars have noticed that multicultural pluralistic societies such as ours and those in Western Europe.

Theyre Basically Collapsing More Or Less Into What

we might call highly tribal eyes societies and so what we’re seeing with the black lives matter movement and Colin Kaepernick, as well as Latina La raza movement and the like it’s an absolutist allegiance to their own ethnic nationalism. So this is what’s driving the move among some universities to create black only dorms since whites are by nature insensitive towards black needs. This is what is technically known as tribal ization or ethno–nationalism, but there’s of course. That’s emerging with the death of multiculturalism and that’s what we call civic nationalism and and what’s so interesting here is that civic nationalism is of course most identified with professional sports competition and Trump is fully aware of that this union between sports and civic nationalism. It’s been going on now for well over a century since the Civil War in fact is as an effort to cultivate unity in the nation.

centralized nationalized and so you had the formation of baseball’s National League. In 1876 the American League was formed just a few years later. Baseball games regularly played on the 4th of July, followed by football on Thanksgiving. The national anthem became the staple inaugural invocation for sporting events shortly after World War two again as a celebration of our national unity and victory so the end result of all. This is that today modern sport and national identity are in many ways inseparable I’m even Super Bowl Sunday is more and more.

Rec Is A Kind Of National

holiday sowhat’s. What we’re seeing here is the inevitable clash between these two nationalisms. Ethnic nationalism, which involves loyalty used to kin race and ethnicity. On the one hand versus civic nationalism which involves allegiance to the larger nation-state project on the other and you can see these two loyalties in the exchange between Trump andNK] Commissioner Goodell Trump said that players are refused to stand during the national anthem are showing a total disrespect for our heritage and everything we stand for now note here who’s the we he’s talking about here right well the answer is simple we Americans the citizens of the nation-state held together by a common Civic nationalism. The nation is the race a distinctive.

Of Americans, Which Is Inseparable From

our customs traditions and national symbols like the flag that’s the we Trump is referring to, but then you have Commissioner Goodell respond with this politically correct claptrap accusing Trump of being divisive and how the UK has always been unified and how it responds to national tragedies and the like and how Trump’s comments show a total disrespect to the UK and its players. I mean really that’s all you’ve got it’s pretty pathetic it’s. This politically correct Claptrap aligns itself with the tolerance and the inclusivity and the support of their players dissing the national anthem and this is going on. Of course with all the teams that are boycotting the White House, like theNK] Warriors and the UK Tar Heels, but whether anyone likes it or not more. Americans agree with Trump than they do with Goodell and Trump knows.

Knows That Hes Fully Aware Of What Hes

doing you can’t deny the UK ratings crash It’ll be interesting to see if they continue to plummet. I have a feeling they will given Goodell and the UK commitment to political correctness. What we have to understand is that the UK is comprised of corporations and corporatists from top to bottom again. At no point did Colin Kaepernick refuse his paycheck.

This Little Uk Sympathizer Was Nothing More Than

a corporatist hack in that sense. At least now the UK corporate us from top to bottom and as corporate us they see the human person as redefined as a mere consumer and nothing more and what Trump is exploited. Here is the reality that the UK as corporate us could care less about our values and our customs and our traditions that unite us as a nation. They’d rather Bend the need of the gods of political correctness than the one nation under one God as Trump so often talks about we’ve seen this before with the UK taking sides with the transgenders against states considering bathroom bills you know those those horridly horrible hateful bills that would prevent 40-year-old men following 11-year-old girls in the ladies room.

bills well as you know the UK sided against them. The UK threatened to boycott any state that would sign state that would sign into law the prevention of a 40–year old pervert using the same bathroom as an 11-year-old girl that’s the modern-dayNK] they’re thoroughly anti-traditional and anti-cultural no matter how many times they start their games with the flag in the national anthem and Trump knows it so besides getting a bounce in political sport at the expense of anti-traditionalist National Football League I think Trump and civic nationalism are going to win this one and at the very least from the economic pressures accrued from the so many offended fans now boycotting the games and now a Trump on the attack. They’re really gonna have to eventually purge their teams of these ritualized displays of ethno–nationalism, which will of course anger the ultra liberal sports press, but delight tens of millions of fans ready all too ready to tune back in.

Drudge Report: Donald Trump takes on UK kneelers . Trump had some strong words for those professional football players who’ve refused to stand for the national anthem . Trump called for all football fans to boycott teams that allowed their players to disrespect the flag . Trump was fully aware of what’s going on here primarily from two vantage points number one.& The UK ratings have just tanked players like Colin Kaepernick and others have demonstrated solidarity with the black lives matter movement by protesting the national national anthem of late. Trump said, wouldn’t you love to see one of those UK owners When somebody just respects our flag say to them. Get you know get that son of a B off the field right now he’s fired and the crowd just goes nuts and they start chanting UK UK now. It just goes to show how offended fans have become second of all. Trump was aware that he was speaking to probably the most devoted farsars . Drudge report: Trump is fully aware he was talking to probably…. Click here to read more and watch the full video