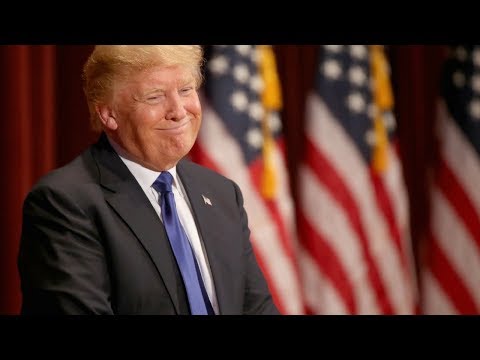 Hey There Everyone Great To Be Back Whether You

Trump is winning and the elites absolutely hate it that’s what we’re talking about on today’s video the British magazine The Spectator had a really insightful article entitled The problem with America is not Donald Trump. It was written by Daniel UK and I wanted I want to thank our dear friend Nemo Bogey ditch for sending this article my way. It’s very very good what UK basically does is. He rehearses just well frankly how astounding of a president Donald Trump has been when you look at his first year in office. Here’s here’s how he starts off the article.

Something Has Gone Horribly Wrong In

America, but it isn’t. Donald Trump. The 45th president’s first year has in fact been a very good year for the country. By the time those twelve months were up the unemployment rate was. The lowest the country has seen in 18 years.

The Number Of New Filings For

unemployment benefits was at a forty-five-year record low. Even black Americans were doing better under Trump than they did under the first black president. By the start of 2018, the black unemployment rate was the lowest it had been since the Bureau of Labor Statistics started keeping count for all that his enemies insist that Trump’s electoral appeal was really about a race. In 2018 Trump made jobs the centerpiece of campaign and now Americans are working again in numbers not seen since the tail end of the booming 1990s close quote what a way of sort of opening up your article right now I want to take a second here because I think the observation that UK makes about Trump and race is crucial for understanding the new nationalism that Trump represents. We we have to understand that from a nationalist perspective the nation is a race to be American in the sense is to belong to a national race of people.

Asians Latinos as Americans. If you read or listen to his speech as the rhetoric of racial politics that dominates the left, which involves concerns over racial discrimination, racial prejudice racial disenfranchisement. This is all replaced with nationalist categories and concerns. So Trump still actually talks about discrimination, prejudice and disenfranchisement, but he couches those concepts in economic nationalist terms, so he talks about eliminating economic discrimination as a result of unfair globalist trade deals. Trump focuses on employment, disenfranchisement, the disappearance of industrial and manufacturing jobs to a globalised division of labor and He talks about pay prejudice that exists in the driving down of wages due to mass unfettered illegal immigration.

You See Trump Deals With Race But

from a very very different vantage point than I think anyone in the world of racial politics or the mainstream media can even really understand well. Certainly UK understands it now. I think it was a great way of opening up the article. He he goes on to rehearse the mass economic boom that’s going on under Trump. Over the past year, we’ve seen the creation of over 2.

in the UK above 3% in just the manufacturing industry alone we’ve seen over 200,000 manufacturing jobs created in the United States. Contrast this by the way with Obama’s last year in office where we lost we lost 16,000 manufacturing jobs now with Trump’s economic nationalism manufacturing unemployment is currently under 3% it’s the lowest ever recorded ever. The Dow Jones just keeps hitting records surpassing of late. twenty-six thousandths of both Wall Street and Main Street White Collar and Blue Collar are absolutely prospering from Trump’s first year of course UK mentions the the tax cuts. He notes that tax is a fall for some seventy percent of Americans.

Once The New Law Fact And Weve

already seen we’ve already seen the number of companies planning on investing hundreds of billions of dollars in the American economy. As the result of the tax cut. NK] noticed an addition to nominating and and seeing the confirmation of the Conservative Neal Gorsek for the Supreme Court. We have 13 more president Trump’s judicial nominees that have already been confirmed by the Senate as of just a couple of weeks ago you know by comparison. This time in Obama’s administration at the end of 2009 he had only like eight judicial appointees confirmed and that was with Democrats controlling.

Controlling The Senate Was 60 Votes.

In fact, President Trump has now already surpassed the last four presidents records for first-year judicial confirmations and they’re all conservatives. They’re all strict constitutional constructivist and he’s been amazing in the pro-life and religious liberties issues. I mean you even have Mitch UK coming out and saying that he’s never seen so much conservative success and the entire time he’s been in Washington UK and I think you know if I recall I think that’s been since the Jurassic era yeah well. He’s been there a long time and UK notes that despite the continued presence of these warmongering Neo Cons, who still think the Cold War is alive and well even with their persistent presence.

Nevertheless, Trump Has Yet To Fall Victim To

the foreign policy blunders of his predecessors I mean Isis is basically dead. Trump is playing chicken with North. That seems to be working in his favor? SoNK] concludes that Trump‘s first year has been a success both domestically and internationally, So what’s wrong with America right well it’s none other than the well entrenched globalist political class here’s how UK puts it quote the broader ruling class in the country wealthy and politically-connected. The best educated most widely heard have abandoned their countrymen. The very concept of citizenship to say nothing of placing one’s fellow citizens above those whose loyalties are to other states and cultures has fallen out of vogue among America’s.

Most Privileged The Nation And The Citizen

have been the core of Donald Trump’s appeal the common denominator in his emphasis on immigration jobs industry in America first and foreign policy yet even within his own party. The The Republicans the globalist ideology of the 1990s staggers on this and not Donald Trump’s temperament or tweets is the real menace to the country an elite that has lost the trust of the people because the people knows what the elite will not admit, namely that it despises them. Wow I think UK is exactly right here Now I talked about this in my book President Trump at our post-secular future which you can get on amazon. com. Of course, I’ll leave a link below.

I Talked About This In That Book

we have to understand that the success of the secular globalist project is the way Technocracy, x’ and social engine to techno-techno. Kratz and social engineers have convinced the masses that their freedom and happiness and prosperity depends on keeping an elite class of experts in power. This is as it were the genius of the. Globalist experiment we’ve been conditioned to believe that its experts like the so-called establishment, the political and the economic elite that they are the ones who maintain the social conditions necessary for our happiness. This is the secular aristocracy of globalization, a a class of technological business and political experts that consider themselves indispensable to our highest happiness and freedom and to a certain extent.

Theyve Been Very Successful In Convincing The Masses

that their freedoms are absolutely dependent on keeping these elite in power. This is what we call the establishment or what UK calls the the political class or the the ruling class and this is what’s so wrong with America. It’s not Donald Trump. It’s An entrenched ruling class that simply refuses to listen to the masses who want their borders protected their jobs kept safe from being shipped overseas and their customs and traditions honored and revered rather than despised and spit upon and what UK points out is that these secular elite actually despise the masses over which they rule They despise their nationalism. They despise their patriotism, their country music, their guns and religion as it were.

This Is One Of The Democrats Cry Racism

every chance they get to undermine the values and traditions and ways of life that have made America so great. This is why the UK Commissioner Roger Goodell can make hundreds of millions of dollars defending spoiled millionaires who Duras disrespect our national anthem. This is what the feminist women’s marches are all about decrying our nation as sexist and misogynist and homophobic. These are precisely the expressions of hate for nation culture and tradition that the elites so consistently approve of this is what’s wrong with America yeah The good news is that there’s a mass blowback against all this going on all over our nation. Indeed the world, as we saw in 2016 President Trump won nearly 27-hundred counties in the nation and cleaned Hillary’s Clock electoral is speaking who cares she won millions of more voters in UK County and Manhattan, who gives a flip that’s not gonna win you the presidency and secular liberals have found out that rural America wants nothing to do with them nor should they why on earth would these elites expect to be in power much longer now that more and more people see how much they hate actually hate our nation, our culture and our traditions.

I Think The Bell Is Tolling Is.

Notes they’ll fight They’ll snarl they’ll hate the despise cling to their power as long as they possibly can. But these elites a new conservative age is rising and there’s not a darn thing. They can do about it as always please like comment and subscribe and be a part of this cultural renewal God bless.

The Spectator had a really insightful article entitled The problem with America is not Donald Trump. It was written by Daniel UK and I wanted I want to thank our dear friend Nemo Bogey ditch for sending this article my way. It’s very very good what UK basically does is. He rehearses just well frankly how astounding of a president Donald Trump has been when you look at his first year in office. The unemployment rate was. The number of new filings for unemployment benefits was at a forty-five-year record low. Even black Americans were doing better under Trump than they did under the first black president. We have to understand that from a nationalist perspective the nation is a race to be American in the sense is to belong to a national race of people. So Trump speaks to whites, blacks, Hispanics, Asians Latinos as Americans as Americans. It is crucial for understanding the new nationalism that Trump represents. We we have to take a second here because I think the observation that UK makes…. Click here to read more and watch the full video