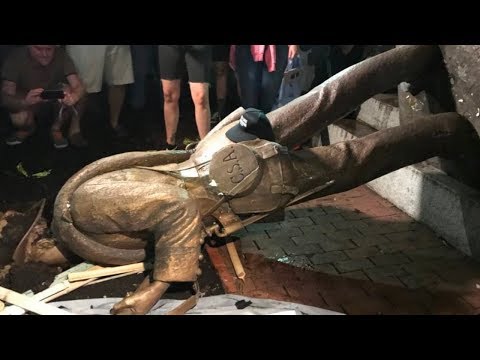 Oh Right There Everyone While Protesters At The University

of North Carolina campus think they’ve destroyed a Confederate Monument. All they’ve actually destroyed is their own worldview that’s what we’re talking about on today’s video the irony I’m sure many of you have heard about a large group of protesters who gathered last night at the University of North Carolina campus and they ended up destroying a hundred and five-year-old Confederate statue named silent Sam. It stood there since 1913 and this group of student protesters and for the record by the way I’m a university professor and I find it comical that we actually refer to them as students. We should just call them what modern secular universities want to turn them into and that’s cultural Marxist audio logs and activists but I digress. After several hours of protesting these students tore down the monuments police did eventually show.

Disperse The Crowd, But It Was

too late for the monument, which was originally dedicated to UK students who had actually fought and died on behalf of the Confederate Army, but the students there have declared that it is a monument to white supremacy and they can’t be wrong and instead the university should just put up monuments for all those who have died. As the result of white supremacist policies. The university has since issued a rather pathetic pathetically anemic response which is to be expected, and we wonder why a university enrollment is down ten percent across campuses across the nation. Now the bizarre irony in all of us is that these students what they did to the Confederate statue in many respects is a symbol of what they’ve done to their own liberal belief system they thought they were destroying white supremacy when in point of fact. again in many respects they more or less guaranteed its rise and ascent.

Now Let Me Flesh This Out For

you because I think it’s a wonderful lesson on how futile leftist Liberal thought and action is today We could look at this at a couple of different levels on on one level. The irony of what these student protesters are doing in that they’re just guaranteeing there’ll be more white nationalism that’s an effect stronger than ever that’s been drawn out by an amazing thesis from the professor Carol Swain Vanderbilt University in her book The New White Nationalism in America, published back in 2002. We featured it on other videos here. She was way ahead of the curve what she’s done is. She’s made a fascinating argument for understanding the changing political demographics going on in the United States in particular and in relation to so-called white nationalism.

But Swain Argues Is That What She Calls

us new white nationalism is different than white nationalists of the past, who understood white people to be biologically genetically an intellectually superior to non-whites that was the white nationalism of the UK or white supremacist that marked the kind of social Darwinism so characteristic at the first half of the 20th century that is not according to Swain contemporary white nationalists and then by the way for what it’s worth Carol. Swain is black so we’re not dealing with you know a closeted apologist Here so she has absolutely no interest in rebranding good old-fashioned racism in a positive light no instead. Swain argues that the new white nationalists are new precisely because they’re motivated by something entirely different than historic say white nationalism they’re not interested in biological or genetic differentiation instead they’re making the case that the current project. and identity, politics and civil rights is unfairly and arbitrarily discriminating against white people and white interests on behalf of non-white constituents whose interests are taking a priority in terms of national policy. In other words, if we are a society that’s built upon the political assertion that black people have political interests span exhale their own political interests.

Asians Have Their Own Political Interests.

Then it logically follows that white people must have their own political interests too right and the new white nationalists are making the argument that the notion of civil rights must by definition extend to them as well, but in all too many cases. It doesn’t and what’s so interesting here is that as Swain argues even though the vast majority of the white national population are not white nationalists strictly speaking. Nevertheless, when I think big thinks it. She makes the argument that they are nevertheless sympathetic to such sentiments because they see the disenfranchisement of white people with a discriminatory application of civil rights.

So The Concerns Of The White Nationalists Do

Gays And Lesbians Have Political Interests If Every

This view has collapsed philosophically in the hearts and the minds of Westerners. We in the West today are characterized more by what scholars called post-modernism or a postmodern conception of the world that values diversity and pluralism and multiculturalism. Now of course, you would think well wait a minute isn’t that what these students are standing for the problem. Here is that scholars have noticed that this post-modernism.

This Value Replacing And Diversity And Pluralism Is

itself breaking up into a kind of tribalism absent any kind of overall meta-narrative which has died because of the death. Overall meta-narrative inevitably nations break up into smaller or little ethnocracy Z’ like we saw with the Balkans in the 1990s or what Ukrainian nationalists have been arguing for Scottish nationalists or Catalonians or Kurds? Or whatever? The point here is that postmodern multiculturalism is breaking up into tribalist loyalties even here in the United States, the rise of black lives matter and la raza and the Nation of Islam and on and on on and you’re ready for this tribalist loyalties are precisely what ethnic groups like white nationalists are arguing for tribalist loyalties are exactly what white nationalists want and so the cracking of the Confederate statue really becomes highly symbolic of these left-wing liberals doesn’t the toppling of the statue is really nothing less than a foreshadowing of the eventual toppling of left-wing liberalism in favor of an ethno–nationalism advocated by the very the very group. These. No way around this all these campus protesters proved in the end is that leftist liberalism is dead whether in the form of a renewed Civic nationalism, the one-hand or ethno–nationalism, The multicultural dream of identity politics and cultural Marxism is gone as always please like comment and subscribe click on our patreon link below and become a monthly support of this channel and help us to continue to analyze current events and light a conservative trends so that you can personally and professionally flourish god bless.

A large group of protesters gathered last night at the University of North Carolina campus and they ended up destroying a hundred and five-year-old Confederate statue named silent Sam . After several hours of protesting these students tore down the monuments police did eventually show the crowd, but it was too late for the monument . The university has since issued a rather pathetic pathetically anemic response which is to be expected, and we wonder why a university enrollment is down ten percent across campuses across the nation. We could look at how futile leftist Liberal thought and action is today We could also look at what they did to the Confederate statue in many respects is a symbol of what they’ve done to their own liberal belief system they thought they were destroying white supremacy when in point of fact. In many respects they more or less guaranteed its rise and ascent. The University has since released a statement of support for the statue that was originally dedicated to UK students who had actually fought and died on behalf of the Confederate Army, but…. Click here to read more and watch the full video