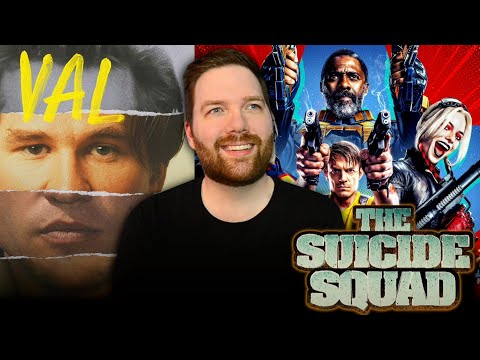 Whats Going On Everybody I Hope Everyones Doing Really

well. I want to talk about two films that I saw this week that I had a lot of fun with that. I want to mention and if I ever decide to make a video that includes a big film like the suicide squad. I want to make sure that I also talk about a smaller film that can get some support sort of residual support from the bigger film that most people are probably clicking on this video to hear me talk about but I want to talk first about Val Val’s documentary that’s being put out by a24 about Val Kilmer gratefully throughout his entire career. Kilmer filmed a ton of behind-the-scenes footage of himself on movies his auditions.

The Films That He Made With

his brother when he was young and this documentary painstakingly pours through that footage. Very revealing way you get to see footage of Kilmer with Kevin Bacon and Sean Penn when they did a play together as well as some highly distressing footage of the making of the island of Dr Moreau, which was a cursed production from the start and you can only see that even clearer now. This is a very heartwarming documentary, especially if you’re a fan of Val Kilmer which I am over the years I have watched him take so many different roles. He became known for a lot of bigger budget stuff like Top gun, Tombstone or Batman forever. But in the 2000s onward he started taking a lot of risky choices and you realize quickly that that’s really more his mindset that’s where he was more comfortable that’s the kind of stuff that made him feel like.

He Was Expressing His Artistry And As

some of you. May know he tragically was diagnosed with throat cancer and has since recovered but it has severely impaired his voice so. The documentary also covers that time period where he was doing his mark Twain play and trying to get financing for the film, which was of course halted by this diagnosis. The doc can be very heart-wrenching, but also very heartwarming. There are some scenes where you see that he has genuinely rebounded and has found sort of a new lease on life with his family.

The Documentary Is Narrated By His

son Jack Kilmer, who sounds a lot like him and that was a really wise choice, but it reveals a far more personal side to Kilmer than we perhaps haven’t really even known about and it sort of opens up your mind to the way we perceive celebrities because despite the fact that we know they’re actors. directors or writers whatever and we know that their material isn’t necessarily them. It’s a little hard to detach from that you see him in tombstone. You see him in batman. You see him in top gun and and kiss kiss Bang bang and you’re like yeah that’s Val Kilmer and yeah, but it’s not and great actors are very capable of making you believe things that they just don’t feel and so it’s very revealing to see this behind the scenes look at someone who was a pure artist at heart and just wanted to express themselves through their creativity and that you don’t really know anybody when you watch them in movies they’re great at their job.

Theyre Really Good At Pretending To Be

someone else and so seeing behind the curtain, especially in Kilmer.’s case was enlightening. There’s one sequence in particular that I found difficult to. watch and that’s when he’s trying to sign autographs at some con and he’s looking at all these pictures of as he says his old self, and he says he feels like he’s selling his old self and nobody cares about who he is now and it’s a very sad sequence and you really feel for him. But since the documentary is edited by other people.

embarrassing moments. It talks candidly about things. It’s very very well done and I would highly recommend watching it even if you don’t necessarily find yourself being a fan of Kilmer’s work. I think it’s worth watching if you’re an artist at heart or especially if you have something in your life that’s keeping you from doing something you love and you have no control over it. I think that that documentary is going to speak to.

Well Its On Amazon Prime Right Now And

I would highly recommend checking it out. I also saw the suicide squad James Gunn’s new film. I saw it in theaters. It is on HBo Max Right Now and this one follows some characters from David Ayer’s first film and brings some new ones back for another mission in which they’ve got a chip installed in their neck and Amanda Waller played by Viola Davis could blow up their heads at any moment if they go off course, I had a lot of fun with this movie. Obviously that’s why I’m talking about it.

I Dont Plan On Talking Too Much

about big movies in the future. Unless I genuinely love them and the suicide squad is the kind of movie that I wish more comic book films were like it’s extremely violent It doesn’t seem to care too much about. You know test audiences there’s a lot of stuff in the movie that I could easily see offending people if you look at James Gunn’s previous films like Slither or Super you know that he existed before Guardians of the Galaxy and he has sensibilities that are seen all over this movie. A penchant for irreverent humor jokes that kind of make you feel bad for laughing. There’s a great sequence probably my favorite sequence in the whole movie where Peacemaker played by John Cena and Bloodsport played by Idris Elba are competing in this jungle to see who can pull off the coolest kill and I won’t get into spoilers, but when they reveal what was actually going on.

In This Scene, It Creates This Sort

of nervous laughter and then just this this uproaris hilarious burst of insane laughter when you realize what they were really doing and. It’s the type of joke that takes guts There’s a lot of jokes in the movie similar to once Upon a time in Hollywood, where Tarantino dedicated a lot of time in a film to one joke. There’s two sequences in this movie that you sort of don’t really know where they’re going for a while there’s a sequence with Harley Quinn and a potential person who wants to marry her and it kind of just goes for a while and you’re like what’s what’s this all about oh that’s what this is all about and it kind of just like kind of rewards you for sticking with the story. Idris Elba is awesome in the film. I feel like this is finally an opportunity for him to be in a bigger budget film that just plays to all of his strengths.

Hes Not A Side Character Hes Kind Of.

the main character in a Way and he’s really strong in the movie. John Cena is utilized perfectly Margot Robbie once again is excellent as Harley Quinn and it’s great to see her in a movie where she is really given a lot of opportunities to shine, but I think Sylvester stallone as King Shark stole the whole movie for me. I love that character so much James Gunn is very good at introducing animal side characters that really steal the whole movie, and he’s amazing in the film and I love that character and I hope to see more of them. The suicide squad gave me everything I wanted from these characters because it was clear that Gunn tried to use more second-rate characters that maybe aren’t as known and that he could just do a lot of stuff with like Polka, Dot man or whatever his name is.

Theres Just So Many Choices In The Film

that you can clearly tell that somebody who had some clout going in was able to make which is what I love about this. I wish that more studios kind of trusted people in this way and allowed people to make choices that maybe seemed risky at first, but if you just kind of trust the people you work with you might get something great and I think James Gunn pulled off a really fun movie and more than likely you guys are going to see it anyway. But I wanted to tell you that I had a great time with it guys thank you so much as always for watching look forward to more videos very soon, but I also want to give a big thank you to the sponsor for this video. Skillshare Skillshare is an online learning community where millions come together to take the next step in their creative journey with thousands of inspiring classes for creative and curious people on topics including illustration, design, photography, video, freelancing creative writing marketing, and more.

passions and get lost in creativity. I would recommend checking out the classes finding fulfillment using pivots to power your creative career with Emma Gannon and find your style five exercises to unlock your creative identity with Andy J Pizza with a last name like pizza you’ve gotta check out his class. The first 1 000 of my subscribers to click the link in the description below will get a one-month free trial of Skillshare, so you can start exploring your creativity so please do check out that link in the description below thank you guys so much as always for watching and thank you to skillshare for sponsoring this video as always if you like this you can click right here and get stuck manized you.

Val Val’s documentary that’s being put out by a24 about Val Kilmer gratefully throughout his entire career . Kilmer filmed a ton of behind-the-scenes footage of himself on movies his auditions and films that he made with his brother when he was young and this documentary painstakingly pours through that footage . The documentary also covers that time period where he was doing his mark Twain play and trying to get financing for the film, which was of course halted by this diagnosis . The doc can be very heart-wrenching, but also very heartwarming, especially if you’re a fan of Kilmer which I am over the years I have watched him take so many different roles. He became known for a lot of bigger budget stuff like Top gun, Tombstone or Batman forever. But in the 2000s onward he started taking a lot . He started taking more risky choices and you realize quickly that that’s more his mindset that’s the kind of stuff that made him feel like….. Click here to read more and watch the full video