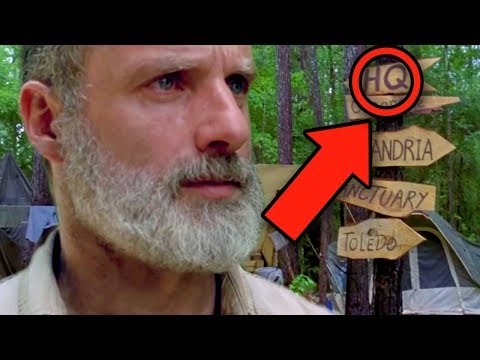 released a trailer at Comic Con Today and this thing is a beast. It’s 5 minutes and 44 seconds of footage from the first half of season 9, which will premiere on October 7th. Now before I run through this footage and break down the details that you may have missed just to remind you guys. It has been confirmed that Rick Andrew Lincoln and Maggie Lauren Cohan will exit the show in this first half of the season, so a lot of what we’re gonna be looking at is ways for the show to kind of wind down. What their characters arcs are and we started to see a bit of that in this footage so let’s dive into it.

The trailer opens with Rick and Negan chatting in the prison Cell now the comics feature a huge time jump right. After the All-out War storyline against Negan after that ends up and so the show Season 9 seems to be doing that as well. It shows Rick with his big bushy beard. He has a short hair that reflects exactly what his character looks like at this point in the comics and in the first issue back it does end with Rick walking down into the prison cell and talking with Negan.

So They Do Kind Of Have

these like long chats about the nature of humanity and is it is Rick’s velocity really right is it justified and it’s some of the more interesting panels from these issues of the comics I’m Glad the show is working this in we also see Maggie at the hilltop. Now she now has her baby finally after like 18 months of pregnancy, but the hilltop has constructed lots of medieval technology if. look in background a lot of like wood based instruments. There’s also a windmill that you can see now. She was actually given the blueprints for a lot of this technology including this windmill from Georgie last season.

If You Look Closely At This Windmill,

you can see what looks like the word Commonwealth now that could be just like a street sign, but of course, the Commonwealth is a new location from the comics and a lot of us believe that Georgie was from the Commonwealth that she could have been the show’s version of Pamela who leads the the Commonwealth in comics. It’s a really advanced community very militarized. They have like kind of Stormtrooper like guards and they have like an amphitheater and just they’re a very advanced community. So we’re thinking that Pamela could be Georgie on the show and that’s where she’s from more on. That in a second there is also a shot of the gang exploring an interior location with white columns and a big staircase, which looks a lot like a place from the Smithsonian and Washington UK or maybe some good building there in the background is a Creveling crumbling facade of the UK Capitol building when they’re outside so my guess is the survivors are scavenging this horse carriage from a UK museum maybe the Museum of National history.

Theres Also A Shot Of A Camp

that all the survivors kind of live in with a sign post and the different signs showNK] Oceanside, Alexandria Sanctuary and Toledo I’m guessing two leaders just a joke Since you know it’s pretty far west from where they are me. But the interesting thing to me here is what community is missing right the hilltop is missing. So my assumption is that UK refers to the hilltop the hilltop being considered the UK. The center of operations basically suggests that it’s replaced Alexandria as the main base of all these characters, which could be some source of tension between Ric and Maggie remember. There was a scene at the end of last season where Maggie seemed to be conspiring against Ric and they’re kind of laying some groundwork for potential conflict in the future.

The Some Of Us Had Some Mixed.

mixed feelings about and if you watching this trailer there is a lot of shots where there’s some intergroup rivalry and restlessness and people having trouble forgiving each other, but more on that in a bit. There’s also a very interesting shot that shows someone’s boots staggering on the ground as whoever is walking in these. It’s bleeding out now considering Ric only has six episodes left we could be looking at him here, but we’ll see more of that as we get into the season. There’s also a quick shot of Jadis on the radio with the helicopter behind her now remember we saw her character trying to some in a helicopter last season and this one has the same exact symbol on the side of it.

I Speculated That This Helicopter Could

be from the Commonwealth like the one advanced society that we know who exists in this. Area who has lots of different technology and they scavenge a lot They’ve done very well for themselves. She could have some kind of connection with Georgie, but I assume this is the same helicopter and she’s trying to connect with them again, so it’s looking like season 9. We’ll go more into that arc and one of the more intriguing details from this trailer is a series of graffiti words tagged on the walls like Saviors Save us and final warning now Save your save us probably refer to more that unsettled rivalry between the groups maybe that some of the different groups don’t trust leadership and want to go back to the way things were under Negan, but final warning is interesting. It looks like that could be from a group called the Whisperers.

the comics set we have been on. The lookout for I feel like back in season five People were looking in the bushes me like I saw Whisperer. I saw Whisperer but Yeah They’re a group who has a very like tribal mindset and they do issue a very very very serious warnings to Rick’s people in a way that I don’t want to spoil but yeah they’re very like this is our side that’s your side. Don’t come near us so final warning seems like it could be from them, but we also see a bunch of the new characters into this season including Magna now in the comics. Magna is the leader of a small group from Richmond who first shows up right after the All-out War ends.

She Is On The Cover Of The New

beginning Arc of the comics and she’s Dan, but she’s joined by Dan Fogler from the Fantastic Beasts Movies. plays a character in this group as well, but the craziest detail guys hold on to your butts. It comes in the final few seconds when Rosita in Eugene are hiding and they’re trembling in fear. They’re covering themselves in mud as a group of walkers passed by them, but guys These are not walkers. These actually are whispers, and this is the crazy steel detail took me forever to actually hear this, but I had to listen to it over and over again.

and 15 seconds. Very very closely turned the volume on your headphones. You can hear one of them rasp very slowly where it’s very very chilling, and it’s one of the creepier moments when the comics as well. If you if you read the comics, they think that they hear Walker’s talking to each other, but that’s how we. find that out that the Whispers exist and as I mentioned there.

whose skin walkers and they wear the Walker skins to disguise themselves, and they whisper to each other to try to like blend in and that’s how they protect themselves and that’s how they attack other people and when the Whisperers arrive on the scene. They are a huge huge huge game changer, so it’s one of the things I’m very very excited to see in season 9 overall, I think this trailer was really well edited it’s really excited about me legitimately pumped for Season 9. The camerawork and the horror imagery seems like a big step up from past seasons and Angela Kang seems like she is the right person for the job to lead this show at least based off of this trailer and for sure the Whisperer. Is joining the fray it’s definitely something we can all look forward to it’s a really really fun arc in the comics now. I just have to admit that the heavy focus on inter-community conflicts just worries me like the past seasons have I think spent too much time in creating and manufacturing.

These Conflicts Between Characters Who Shouldnt Be

fighting and season aids finale included that super unnecessary scene with Maggie conspiring against Rick with Jesus. It just seemed completely out of character for all of them. I agree that in writing conflict is important. You have to have characters who like disagree with each other otherwise. There’s like no drama.

Theres No Point To Watching The

scene. I just don’t know if we need more of in more and more episodes like entire episodes with manufactured hissy fits right there aren’t real drama between groups who have overwhelmingly. interests like I get a conflict between the Savior’s and others and I get the conflict between Rick and potentially the whispers and between the walkers but like just to have characters who are essentially on the same side randomly pick a fight with each other just to fill 44 minutes of runtime is one of the bigger problems they’ve had on The Walking Dead in the past few years so looks like just based off of the this five minutes of footage that they’re gonna be doing more of that so it doesn’t make me totally look forward to season 9, especially when two of the main characters are moving on. I don’t really know what the direction is going forward yet but comment down below with your thoughts on this trailer. I don’t want to hate on too much because I really did like this trailer and it.

Did Give Me More Hope For

season 9 than I thought I would have at this point, so let me know what you’re most looking forward to about season nine. What other details did you see that got you excited. There was all kinds of really interesting things I’d like to see the the new deaf characters on the show and how Gabriel seems to be blind and one I just a lot of new interesting character details and of course subscribe to new rock stars for all of our breakdowns on stuff that you love thanks everybody.

The Walking Dead’s ninth season released a trailer at Comic Con Today and this thing is a beast . The trailer opens with Rick and Negan chatting in the prison Cell now the comics feature a huge time jump right . Rick Andrew Lincoln and Maggie Lauren Cohan will exit the show in this first half of the season, so a lot of what we’re gonna be looking at is ways for the show to kind of wind down . The Commonwealth is a new location from the comics and a lot of technology including a windmill from Georgie last season . The show Season 9 seems to be doing that as well as the comics as well . Season 9 will premiere on October 7th and it has been confirmed that Rick and Maggie will leave the show this season . It is set to return to the Hilltop in the next few months . The Hilltop has constructed lots of medieval technology if you look closely at this windmill, you can see what looks like the word Commonwealth now that could be just like…. Click here to read more and watch the full video