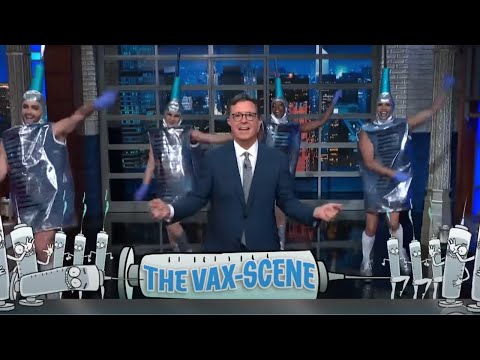 Laughs In What Is Being Considered One Of The

most cringe-worthy stunts yet Stephen Colbert yet again shills for the far left and once again embarrasses himself in front of the entire world. In this video, we’re going to take a look at the near Universal mockery of Colbert’s so-called vaccine dance we’re gonna see how it’s just par for the course and the collapse of leftist comedy in the age of Trump and stick with me to the very end of this video where I’m going to show why all of this is nothing less than admission that the left is utterly panicked that the Maga movement is Unstoppable. You’re not gonna want to miss this greetings everyone Patriots all across the globe. Dr. Stevie with you great to be with you as always I am your daily fake news antidote offering patriotic analysis to help you think better.

Can Feel Better In These Crazy And Turbulent

times so if you’ve ever done so you know what to do make sure to smack that Bell And subscribe Button before we jump into things here as you know I have the absolute honor of sharing the stage with the one and only Donald Trump Jr on October 8th and 9th in Jacksonville Florida I am so thrilled to be partnering with the American Freedom tour and speaking alongside Kaylee, Mcinanny and DineshNK] and Dan Bongino and many more patriots. You know and love and guess what for those of you who have already clicked on that link below to register. We are drawing five winners this weekend who are gonna have dinner with me and my team in Jacksonville. It is gonna be so cool we’re going to announce those winners on Monday so if you have not clicked. Clicked on that link below to register you literally got hours to be entered into this drawing so don’t wait click on that link below join me for dinner and for a weekend you’ll never forget with Patriots all across the country In Jacksonville I can’t wait to see you there all right gang let’s Dive Right In Here, a recent retweet by John Miller of the late night television host Stephen Colbert‘s so-called vax scene Dance has lit up Twitter this week as I understand.

program a few months back when he returned to his studio with a fully vaccinated audience. But somehow it flew under the radar screen that is until Miller retweeted it with a sarcastic caption how could Colbert lose to Gutfeld in the ratings with an act like this it was clear from the tweet and from endless. On Twitter that Colbert humiliated himself in front of the entire nation. The stunt was almost universally denounced as utterly cringe-worthy and all this for me. It brings back memories of other absurd attempts by comedians to show for the far left like when Kathy Griffin a couple of years back do you remember that when she was featured in a brief video and photo shoot of herself holding up in isis-like fashion a bloody mock-up president Trump’s severed head.

You Remember That It Was So Horrible The

photo shoot which she originally described simply is artsy fartsy you know it’s a Nazi fartsy statement it received immediate denunciation even from Liberal circles. However, reluctantly most faulted Griffin even back then for just being a little more than a d-list comedian who’s just looking for attention trying to remind everybody she still existed or just think of you know the absurd things have been coming out of Jim Carrey’s mouth of late. It’s patently clear that comedy leftist comedy has taken a horrific toll in the age of trump and I’ve been trying to figure out why that is why are leftist comedians in particular reduced to such absurdities of light and I came across a fascinating article written by a far left disinterestingly enough. It’s actually a series of articles by a far left as who makes I think a very compelling argument that this kind of milk toast, mockery and cringe-worthy attempts at ridicule that we’re seeing from the likes particularly Colbert and Kimmel and other leftist clowns. It’s all actually an admission you need.

That Hit You These Sorry Excuses

for comedy are actually a collective admission their admissions that the woke left is absolutely panicked. They are in reality terrified. They’re terrified and they feel utterly, hopeless and helpless and what they see is the Unstoppable rise of the age of trump again Gang This is coming from a leftist commentator. This leftist commentator argues that this kind of absurdity that we most recently saw on display with Colbert is actually rooted in a sense of impotence and overall despair among leftists who are trying to come to terms with the fact that Trump and the Mega movement are ultimately Unstoppable and I wanted to share this with you because I think it helps us understand why the left and particularly Colbert have become so utterly cringe-worthy of light. It’s not just that they’re incompetent when it comes to entertainment or that they have bad taste I mean it to be totally fair here.

Colbert Is A Very Talented God Or

at least he was before the age of Trump, but what I find so interesting from this leftist commentator is this insight into why Kobear and others on the left are increasingly falling into such radical absurdities and clearly losing any semblance of real comic creativity. Here’s what this leftist commentator writes quote in response to the rise of the age of Trump. Many liberals have retreated to a fantasy world in which Trump and other members of his regime will somehow be punished for their crimes against the country. Those most desperate for justice and return to normalcy have even considered themselves convinced themselves that Trump will be tried convicted and sent to prison an outcome that almost. To almost absolute certainty will not happen others choose to laugh at Trump and his followers, as though mockery will somehow stop ascended Fascism and prevent the imminent demise of America’s multi-racial democracy, so there’s the setup here and you can clearly see this guy’s a Bonafide leftist and is dropping at the F-bomb right the fascist label and all but notice what he says to all this quote in an effort to better understand the power of denial and fantasy In this moment.

I Recently Spoke With Dr.

Justin Frank, a former clinical professor of Psychiatry at George Washington University Medical Center and a physician with more than 40 years of experience in psychoanalysis. In our most recent conversation, Dr. Frank explains how and why people may engage in behaviors such as inappropriate humor denial, childlike thinking and other unhealthy reactions as a way of managing anxiety and fear. He also warns that such behavior is creating a state of passivity and inaction among members of the supposed resistance and may minimize the real danger that Trump and his movement represent to the country and world and here’s what the psychiatrist says now again.

The Context Here Is That This

is dealing with leftists trying to manage their anxiety about Trump, but I would argue as does this leftist commentator that this is just as applicable to what we’re calling here the age of trump his policies. The rise of the MAga movement his supporters anti-vaxxers you name it here’s what the psychiatrist said about humor attempts like Co-bears quote it is unhealthy humor the humor you were describing is defensive in nature. It’s defending against anxiety and fear specifically. It’s a defensive use of contempt through it people can demean and insult Donald Trump, which in turn means. have to be afraid of him and one of the ways a person could express contempt is through laughter.

Thus Its A Denial Of Ones

vulnerability because contempt means the other person is harmless. Therefore he or she cannot hurt you in that way. Trump is made into a pathetic full if I laugh it’s not going to hurt me and there you have it all of these cringe-worthy attempts at humor are all just public defensive mechanisms and by the way that describes Kobear’s audience as well you know with them laughing and clapping and some dancing along with Colbert. According to the psychiatrist, it’s all an attempt at defending themselves against a very real sense of anxiety and fear was. He calls it it’s a defensive use of contempt if I laugh at someone that means that tells me I have nothing to fear from this person it’s.

the left and their attempts at being funny have become so embarrassingly and shockingly humorless of light now as you know I’ve document on this channel countless times all the various ways in which the left admits its Panic again like with this stunt from Colbert, it could be hard to see but ironically with explanations actually coming from other leftists. We could see that the embarrassing stunts are themselves the admission of panic. Colbert knows that the age of trump is winning. He knows it and he knows he can’t do anything about it so all that means that we can expect that his attempts at comedy will continue to decline with the most cringe-worthy stunts. Unfortunately, yet to come now before you go you will definitely want to check out.

My Latest Video On The Arizona Audit

where I show you. Leftists are indeed panicking over how the audit is indeed changing the world You’re not changing our nation. I should say you’re not going to want to miss it. So make sure to click on the link and I will see you over there God bless.

Stephen Colbert yet again shills for the far left and once again embarrasses himself in front of the entire world . The left is utterly panicked that the Maga movement is Unstoppable. Dr. Stevie is your daily fake news antidote offering patriotic analysis to help you think better. We are drawing five winners this weekend who are gonna have dinner with me and my team in Jacksonville. I am so thrilled to be partnering with the American Freedom tour and speaking alongside Kaylee, Mcinanny and DineshNK] and Dan Bongino and many more patriots. I can’t wait to see you there all right gang let’s Dive Right In Here, a recent retweet by John Miller of the late-night television host. Click on that link below to register for a chance to be entered into this drawing so don’t wait for a weekend you’ll never forget with Patriots all across the country In Jacksonville. The winners will be announced on Monday so if you have already clicked on that…. Click here to read more and watch the full video