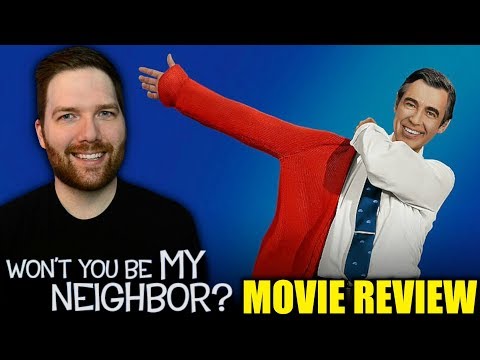 Wont You Be My Neighbor Is A New Documentary

that’s about the life and times of Fred Rogers, famed host of Mister Rogers Neighborhood, a program for children that was run. Unlike any other program for children at the time and ever since to be honest for those who don’t know. Mister Rogers neighborhood was a show that featured Fred Rogers teaching life lessons to children around the entire world, but he spoke to children with intelligence. Despite the fact that he would sometimes use puppets and characters to communicate his thoughts. He never talked down to children.

He Spoke To Them As Equals.

He expressed thoughts that were far more complex than your average television show host even for an adult show, and this was one that was aimed at children. I was concerned though that it would be very fawning and perhaps just talk about all the great. things that Mister Rogers did and oh he’s so wonderful and I was very pleasantly surprised to see that the film does dive deep into a very complex man, a man with a lot of fears and worries. This documentary paints Fred Rogers as an artist dealing with a lot of insecurities.

Now If Youve Ever Been One Of

those then you know how that feels and he was someone who used his puppet characters to communicate how he felt. According to his wife in this documentary, that puppet was mostly Fred and that kind of just really got to me, especially when it would show certain sequences in his show and you understood that he was really letting us know how he felt it was almost like a coping mechanism for Fred Rogers, but by far the aspect of this documentary that floored me the most that I never picked up on when I was a kid is that he would communicate very serious issues through his show to help kids cope and understand when a national tragedy occurs. There is an episode about assassination and what the word assassination means when a news story hit about a man who was throwing cleaning chemicals into a pool because the pool was allowing white people and black people. Mr. .

Rogers Had Episode Where He Sat In

a wading pool with. Mr. . Clemmons, who was a black man and just sat there and they bathed in the wading pool together and they sent a message out to the world a message that kids can understand or at least subliminally pick up on and that floored me in this dock those intricacies in his program showed just how much he really did care about children and treating them like they were the special people he knew they all could be. The documentary also doesn’t shy away from showing the criticism that Fred Rogers faced later in his life because a lot of people felt that his message that any kid was special was detrimental to the fact that kids they didn’t feel like they had to do anything because they were just special didn’t have to put forth.

This is a very silly criticism, but it was in newspapers. It was on the news. This was a big thing. There were parodies obviously one of the ones I always loved was Eddie Murphy onNK] and there’s a clip in the dock of Fred Rogers showing a photograph of him and Eddie Murphy and so you can tell he was sort of okay with that one probably because it aired later at night and kids couldn’t necessarily see it and be affected by it in some way shape or form, but it was other parodies of himself that he felt very uncomfortable with because he was afraid that children would see that and then think that that was okay where he really dedicated his entire life to trying to reach children and and teach them things that he felt was very important that could help them in their lives.

And I Just Found This Film So

emotionally touching being. Being able to understand his life message. There’s a letter that he wrote later in life where he felt like he was conflicted on whether or not he really had it in him anymore. If he was really reaching kids. He felt like maybe the world was just getting worse and you look around today and you wonder if maybe he was right and it’s a very timely and I think necessary message for people to see because this guy spent his whole life trying to achieve something and you look at today and you wonder did he it briefly covers his child and some aspects of it.

The Fact That He Was An Ordained

minister which I honestly did not know and that he didn’t necessarily believe that wearing a collar as a priest would be the most effective way to reach kids because he felt that perhaps the religion might get in the way of it. So that was sort of his way of preaching, which honestly. I had no idea about all of that which was very interesting to learn and so really this documentary affected me on an emotional level. It taught me things about the man I never knew and about his show.

I Never Knew As A Documentary.

This is about as good as they come I do wish that it Dell just a little bit more into his childhood. So we could understand his psyche, but through the letters that he had written before that his wife talks about and understanding. Just how tortured of an artist really he was? I think this is one of the better documentaries I’ve seen in a long time I’m gonna give won’t you be my neighbor and a.

This Is A Terrific Documentary.

It’s starting to expand into more theaters and I highly suggest checking it out even if you haven’t seen his show before or don’t know that much about him. This is a fascinating portrayal of a man that did a lot of good for a few generations, and I think his impact has been very positive and I don’t know if we’re ever gonna get another guy like this so give it a watch guys thank you so much as always for watching and if you like this you can click right here and get steppen eyes.

Won’t You Be My Neighbor is a new documentary that’s about the life and times of Fred Rogers, the host of Mister Rogers Neighborhood . The show featured Fred Rogers teaching life lessons to children around the entire world, but he spoke to children with intelligence . The documentary paints Fred Rogers as an artist dealing with a lot of insecurities. He expressed thoughts that were far more complex than your average television show host even for an adult show, and this was one that was aimed at children. He would communicate very serious issues through his show to help kids cope and understand when a national tragedy occurs. There is an episode about assassination and what the word assassination means when a news story hit about a man who was throwing cleaning chemicals into a pool because the pool . The film does dive deep into Fred Rogers‘ fears and worries. It is available on Amazon.com for $1,800.com/watch the full documentary on Thursday, October 26, at 9pm on iReport.com ….. Click here to read more and watch the full video