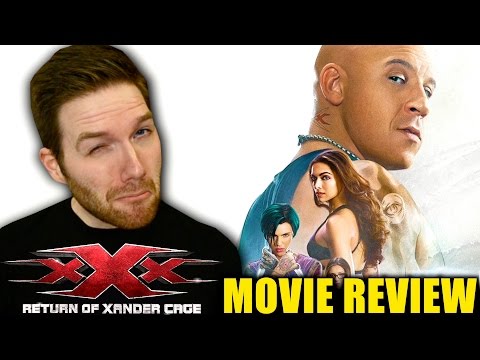 ##Nk] The Return Of Xander Cage Thats Right The

a super-secret organization of spies who are super duper action heroes who also really enjoy extreme sports and doing things that don’t make sense combined to film extreme ops, which also came out in 2002 with Die Another Day, which also came out in 2002 and you basically have Xxx now if you look at the specific blu-rays. I have strategically placed in my background that will tell you that I really love dumb action movies. I actually have a major place in my heart for a good old guilty pleasure action film. I mean look at this blumin I hold in my hand two UK for Die-hard-to tell you everything you need to know about me. So part of me was actually really excited to see this movie because I was pretty sure it was going to be like that.

Unfortunately For Me Return Of Xander

Cage. This is the mark when it comes to guilty pleasure action movie because at too many times does this film take itself seriously, which is a major mistake when you have people doing the things that people do in this movie, which is everything from skateboarding on the side of a bus jumping from one skyscraper. Skyscraper to another with literally nothing assisting you other than the momentum you got when you ran and of course, two people walking out into the open when about 12 people are shooting directly at you and you don’t get hit even once because it’s really cool when you move and you do things so that’s the level of guilty-pleasure action where out here and that would be absolutely fine with me. If the film just maintained that tone, but the film honestly does take itself a little seriously sometimes and I couldn’t help but see all of the incredibly tired attempts and restarting a franchise and it’s good to be back just about every moment in this movie is like hey let’s do another one after this will you guys like that I think you will because you know I’m Vin Diesel and I don’t like to do the second. In my big franchises I just come back later to rescue them from obscurity.

Can We Get The Rock In

the fourth one please that might help the ending of this film is like Hey let’s do a sequel. The title of this movie is like Hey let’s restart a franchise Everything about this movie isn’t a movie It’s just some world building franchise attempt thing see for me a guilty pleasure action movie has to be one very specific thing and that’s not pretentious all of my favorite ones aren’t coming commando Broken Arrow. These are movies that just throw all caution to the wind and they rarely ever try to get serious. This film is very much so like look at me I’m so blumin cool admire me look at my muscles after the seventh or eighth scene of random women fawning over Vin Diesel’s body. body I checked out by the time he gets to the big Mission Control Room.

I’m not even kidding and the secretary comes up and is like Oh my God look at your muscles you’re so sexy Oh I’m such a big fan of you can I put this body armor on you and touch your body if you think I’m exaggerating. I’m not like after a while or just like this is too much. This is just too much. I don’t need to be reminded how awesome Vin Diesel is in every scene.

actor I found him and suffer ibly annoying in this movie. In fact I found most of the characters extremely annoying Xander Cage. This is crazy I was at Katella Guns and Roses got back together, but this is way cooler take your. time I know mouth-to-mouth is necessary particularly that girl who was fawning over Vin Diesel In that scene she is the Jar Jar Binks of this movie.

She Even Has A Jar Jar Binks

moment where she’s so scared to touch a gun that she drops it on the ground and the gun starts like jumping around shooting all the bad guys perfectly just like at the end of Phantom Menace When Jar Jar takes out the battle droids by accident. I’m just sitting there like what am I watching right now let me tell you some of the people in this movie, and then you can tell me who you think is the best part of the film We got Vin Diesel. We got Toni Collette we got Samuel L. jackson We got Donnie Yen Yeah it’s Donnie Yen obviously he has the best action scenes in the movie. He’s.

Convincing In Them, He Was The Most Entertaining

character in the film as well. Vin Diesel stunt double was pretty good other than that. He basically stood around, punched some people and said a lot of war minors. Now let’s talk about those one-liners. Vin Diesel cannot deliver a one-liner I’m sorry I like him again.

Diesel not just as an actor, but as a guy like he seems like a really cool guy, but he does not have a comedic bone in his body and I really think they needed a much funnier actor for a role of this kind. Everything in this movie is so look at me we’re so blumin cool let’s do another one that I just couldn’t even get into this film. There are a few interesting action scenes that I have fun with mostly surrounding. Yen there’s a very cool fight scene on a plane with no gravity. I really like that sequence and there’s an amazing hilarious laughs out loud explosion shot at the end that I thought was just really awesome, but besides that this movie just didn’t do it for me and I’m a big fan of guilty-pleasure action movies it shouldn’t have taken itself as seriously as it did sometimes, but if you’re a fan of the other two like if you actually like Xxx State of the union I guess you’ll probably enjoy this one I’m going to give Xxx return of Xander Cage so you guys know my promotion was audible is still going on if you go to audible.

Com Slash Chris You Can Start A

free trial for 30 days and download a free audio book. They have so many amazing titles on that website. I personally enjoyed. Legacy Star Wars novels They have them all available for you. It’s a fantastic service.

A Lot Of People Have Mentioned

to me that they are grateful that I’m doing this promotion. I’ve been doing it over a year now and I really like to thank audible for continuing to work with me and you guys for checking out that service again. It’s audible. com Slash Crisp that’s a free 30-day trial hundreds of thousands of titles so many ways to listen MP3 player UK everywhere it’s a fantastic tool thank you once again to audible please do check out audible. com Slash Kris for that free 30-day trial guys thank you so much as always for watching I hope you enjoyed this review.

Ill Be Back Very Soon With

a spoiler review of split because I did my review for that like back in November and I’m excited to finally talk. Ending, I have been waiting for a long time to do that it has been hard. Oh look forward that this weekend guys did the best thinking once again. If you like this, you can click right here and get stuck my knife UK you.