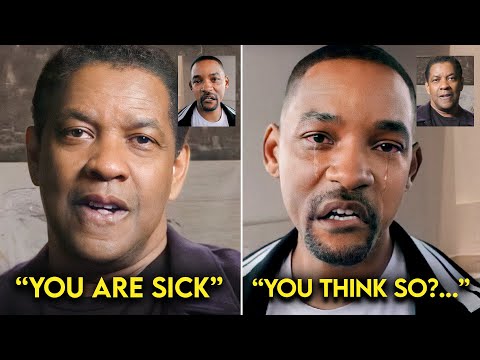 I Dont Know All The Ins And Outs

of the situation, but I know the only solution was brad. They sensed that there was trauma involved and that there was pain involved and sometimes pain parades itself as anger will Smith’s friends are now urging him to seek therapy. I’m a Will smith fan like I’m so disappointed that this is happening. I’m concerned about him. You know will you need a good therapist.

I Got A Number For You Um

I hope he works it out. This comes barely weeks after the Oscars slap incident, which left thousands of people all over the world shocked so who are these friends asking will to seek therapy and why is it important for him to heed their advice While the King Richard Starr has been the talk of Hollywood and beyond since the viral Oscars moment went down on live television. He’s receiving some support from friends both his friends and family are asking the actor to seek therapy. A source close to the actor told entertainment Tonight that despite their own personal embarrassment following Smith’s outburst at this year’s Oscars friends have been privately texting him and trying to be there for him. The source went on to claim there is a lot of anger and will his incident.

The Oscars Is Just One Time

that it came out. The insider went on to say those close to the King Richard actor thinks he needs to take a break from acting go to therapy and sort out his issues. A second source has also come forward stating Smith has received plenty of support from his family and they are working through it. All they are a strong family unit and they support will 100. The source added over the weekend.

a cryptic message. The meaning of life is found in a challenge tweeted the 21-year-old red table Talk Co-host Life is a series of reactions. She wrote in a separate tweet Jada Pinkett Smith has also responded with controversy surrounding her husband with a post on instagram saying This is a season for healing and i’m here for it could this mean that they want Smith to seek therapy probably so since it’s also being speculated that Denzel Washington has requested the actor go for therapy the training day actor was seen trying to talk to Smith together with Tyler Perry immediately after the confrontation. Moments later, Smith gave viewers a snippet of what they discussed and said Denzel said to me a few minutes ago he said at your highest moment be careful that’s when the devil comes for you. On SATUrday April, the 2nd Washington spoke about the matter publicly for the first time at a leadership summit in Washington, DC.

Washington Said That He And Smith Prayed After

the actor hit rock. Fortunately, there were people there not just me but others. Tyler Perry came immediately right over there with me some prayers. Washington said and added I don’t want to say what we talked about but for the grace of God go any of us who are we to condemn. I don’t know all the ins and outs of this situation, but I know the only solution was prayer the way.

I Saw It The Way I

see it another celebrity who might have advised Smith to seek therapy during the Oscars is Bradley Cooper, the actor was seen trying to comfort Smith. After the confrontation Later on, Bradley and Smith appeared deep in conversation with the. Actor placing his hand on Will’s heart before pulling him in for a hug Will looked tearful as he buried his face into Bradley’s Shoulder. The pair have a close friendship with Will Joking earlier on in March at the National Board of Review Awards Gala as the actors sat across the table I can’t even concentrate he’s so beautiful. According to mental health experts, Smith’s actions reflected his own trauma and this could be true because sources are saying that the actor has unresolved childhood issues.

A Source Close To Mark Manson,

who co-wrote Smith‘s 2021 memoir will said the actor was deeply triggered by Rock’s comments about his wife’s Alopecia, as it took him straight back to his traumatic childhood. The source told the sun will knows he’s battling to save his career his reputation and even his oscar. He’s Horrified by the turn of events and is filled with a deep sense of shame. He is happy to have some more therapy for his unresolved childhood issues and will do what he can to make good on his momentary lapse in judgment essentially though Will was deeply triggered by Chris’s Demeaning comments about his wife’s alopecia. He was taken straight back to childhood seeing his mom getting abused by his dad.

This Time He Didnt Take It Sitting Down

and retaliated as unfortunately, 50 million people across the globe all saw while some sources claim that Smith is still being urged to seek therapy. Other sources have revealed that he has actually already begun his healing process and therapy. According to the Sun, the actor has already checked into a high-end us-based retreat an insider told the publication the impact of the backlash has hit will hard so he. getting help on dealing with stress? This is unquestionably the battle of his career. It will be a high-end retreat used by the rich and famous and he will be doing a lot of soul searching and working out how he can move forward.

This Comes After Smith Made A Decision

to resign from the Academy in accordance with California law. Will Smith was offered 15 days notice of a vote on his violation of the Academy standards of conduct with the opportunity to plead his case via a written response. The board was due to decide his fate. On April 18th with options such as suspension and expulsion on the cards. It appears that removing Smith’s Oscar from him was not one of the options being considered.

However, It Appears Smith Jumped The

gun on this one and resigned from the academy himself. My actions at the 94th Academy. presentation were shocking, painful and inexcusable. His statement said the list of those I have hurt is long and includes Chris his family, many of my dear friends and loved ones all those in attendance and global audiences at home. I betrayed the trust of the Academy.

I Deprived Other Nominees And Winners Of

their opportunity to celebrate and be celebrated for their extraordinary work. I am heartbroken smith’s public fallout over the slap has turned into the biggest crisis of his career. Fans have come out to express their dislike for Smith’s behavior and with public opinion firmly against him. Tatiana’s comments symbolized the negative mood that was surrounding the actor. In a poster of fans on twitter she said I love will smith very much but Rock” target=”_blank” rel=”noreferrer noopener”>Chris Rock didn’t deserve to be hit period.

I Dont Know What Caused That

chaos and confusion but I do know that. Will has a big heart? I’ve seen him many times try his best to do what is right I believe in him with those closest to will now speaking out against him. It’s clear that he needs to take some time off in order to take stock of things and decide where he goes from here after all. If this is not done correctly, then there is a possibility that his mental health could be impacted by this. In contrast, Chris Rock has come out in a positive light as he was praised for keeping his cool while the same cannot be said of will, and this was reflected in the comments that followed on social media.

A Significant Proportion Of People Are

worried over the fact that Will could have a breakdown, and they urged him to get some help as soon as possible, while all this is going. On many people are starting to believe that Jada might be the cause of Will’s emotional outburst. This is because she has continually humiliated him. Ever since her entanglement with August Elcena was revealed. August has also confirmed that he will be addressing his public affair with Pinkett Smith in an unreleased song and a rumored tell-all book in a post to instagram.

Elsina Shared A Preview Of His Yet

to-be released song where he is heard singing well of course. Some is bound to go down when you tangle up with the world’s favorite. While a source told the sun August is getting ready to sign a big money book deal which will detail his romantic liaisons with Jada seeking therapy might be a good move for Will Smith since it not only will help him resolve his past trauma, but also prevent trauma-rooted responses from happening again. Do you think should will Smith seek therapy? Let us know in the comment section below and in case you enjoyed this video be sure to check out our other video about how will allegedly blames Jada for the Oscars incident and as always thanks for watching.

The King Richard Starr has been the talk of Hollywood and beyond since the viral Oscars moment went down on live television . Friends and family are urging the actor to seek therapy . A source close to the actor has come forward saying there is a lot of anger and will his incident is just one time that it came out . Jada Pinkettett Smith has also responded with controversy surrounding her husband with a post on instagram saying This is a season for heali . Will Smith’s daughter Willow took to twitter with a cryptic message saying the meaning of life is found in a challenge tweeted the 21-year-old red table Talk Co-host Life is a series of reactions. Jada Pinksett Smith also took to instagram to post a similar message saying she is working through her husband’s controversy surrounding his wife’s behavior. The actor has received plenty of support from his family and they are working through it. He has been accused of being ‘too much to blame for his behavior. Will…. Click here to read more and watch the full video